Many think our government is for sale. By taking a look at the facts provided by the Federal Election Commission, it is easy to understand where they are coming from.

Looking back just a few weeks ago, the Senate voted on Trade Promotion Authority (TPA), the controversial bill that gives power to the executive branch to negotiate treaties. Fast Track/TPA limit’s Congress’ ability to better a trade deal by subjecting members of Congress to 90 days of reviewing the trade agreement, prohibiting any amendments on the implementing legislation, and giving them an up or down vote. The first round began early in May when TPA was blocked. Many Democrats stood together, a rare picture, and voted against TPA from even being debated. However, 48 hours later, and the TPA bill came back and passed cloture. What happened in those 48 hours that changed the minds of those opponents so easily?

Corrupt To The Core: End That Which Cannot Be Reformed

You simply cannot ask a corrupt organization to "investigate" itself; they won't do so in an honest fashion.


DENVER (CBS4)– CBS4 has learned that an internal investigation is underway into the interim head of the Denver Sheriff Department, Elias Diggins, and the captain in charge of the Denver Sheriff’s Internal Affairs Bureau after an internal affairs investigator blew the whistle, saying he was ordered to destroy a videotape that showed an inmate being humiliated and degraded.

“This is the definition of corruption,” said Brent Miller, who believes the sheriffs department fired him earlier this month for refusing to destroy the tape.

This has gone on for a very long time.  It's not uncommon; there's a similar problem in south Florida:


OAKLAND PARK, Fla. — The witnesses who saw a Broward County deputy sheriff kill a man who had strolled through his apartment complex with an unloaded air rifle propped on his shoulders agreed: Just before he was gunned down, Jermaine McBean had ignored the officers who stood behind him shouting for him to drop his weapon.
Nothing, the officer swore under oath, prevented Mr. McBean from hearing the screaming officers.

Newly obtained photographic evidence in the July 2013 shooting of Mr. McBean, a 33-year-old computer-networking engineer, shows that contrary to repeated assertions by the Broward Sheriff’s Office, he was wearing earbuds when he was shot, suggesting that he was listening to music and did not hear the officers. The earphones somehow wound up in the dead man’s pocket, records show.


When you put crabs in a bucket, you don’t need a lid to prevent them from climbing out.

That’s because when any one crab tries to climb out, the others will pull him down and keep him there. Eventually, all of them will be eaten.

When any one of us takes a stand and does something that takes balls — or ovaries — the timid and the brain-dead try to claw at us until we’re back down at the bottom.

Such is the case with Douglas Hughes, a man who decided to use a gyrocopter to protest the government. He is now facing nine and a half years in prison, with obedient police apologists calling him “crazy.” 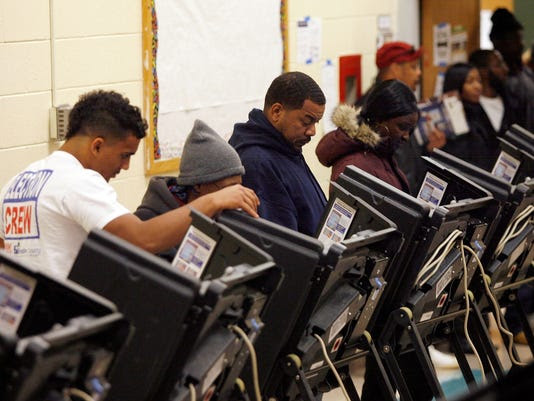 President Obama won a second term thanks to record high turnout among black voters and the first-ever decline in the number of white voters, a U.S. Census report released Wednesday shows.

For the first time, African Americans were more likely to vote than non-Hispanic whites were: 66.2% of eligible blacks voted, compared with 64.1% of whites. Since the Census Bureau began publishing voting data by race in 1968, whites had voted at higher levels than black.

"That's a landmark in American history," says William Frey, a demographer at the Brookings Institution. "And it's pretty clear that black turnout made a huge difference." His analysis of voting data shows that Republican presidential candidate Mitt Romney would have won or tied Obama in the popular vote if groups had turned out at the same rates they did in 2004. 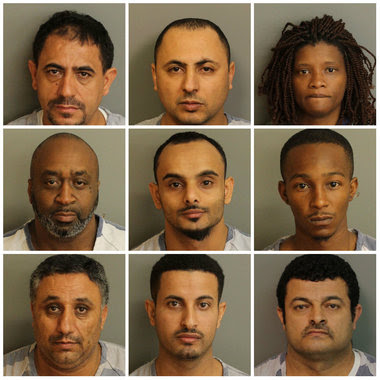 A couple of steaks shoplifted at a Gardendale Walmart three months ago led to the biggest food stamp fraud investigation in Jefferson County's history, and launched 11 simultaneous raids this morning at convenience stores countywide.

Led by the Jefferson County District Attorney's Office, teams of law enforcement officers met at 5 a.m. for a briefing and then fanned out across the county beginning at 6:50 a.m. The officers and agents were armed with 242 arrest warrants and plans to arrest 17 suspects.

Guns: Lane County Or. passes resolution to not enforce SB941

Via Jeff "Brock, this is unprecedented in liberal Oregon."

Lane County is too cash-strapped to enforce the state’s new background check law on private gun sales, the county’s board of commissioners decided Tuesday.

After more than 90 minutes of heated debate that covered everything from the constitutional origins of the Second Amendment to the difference between the words “as” and “are” in a sentence, commissioners passed 4-1 a resolution reaffirming their support of the right to bear arms and opposition to what they call an unfunded mandate created by Senate Bill 941.

Commissioner Pete Sorenson cast the lone no vote, saying the resolution was basically an effort by the other commissioners to pander to their voter bases.

More @ The Register-Guard
Posted by Brock Townsend at Thursday, June 04, 2015 No comments:

Be Amazed: How to Reload an AK-47 With an Injured Arm

Watch the focus and speed in this reload. This can’t be easy.
Posted by Brock Townsend at Thursday, June 04, 2015 2 comments:

Passing the Freedom Act did not reform government snooping, so much as it made it legitimate, according to three-time presidential candidate Ron Paul. He asserts that Democrats and Republicans alike seek to reduce liberty for a promise of security.

“One thing in Washington, when they have the ‘reform’ of something, you cannot trust them, because reform usually means they’re making things a lot worse,” Ron Paul told Larry King on Politicking, Tuesday evening. “I think the reform act is a very, very dangerous thing. It’s not a slight improvement, as some people argue.”

THE 2ND AMENDMENT NEEDS YOU THERE, AT CHUCK'S, TO STOP THE GUN CONTROL BULLIES

Once again, Fr. Pfleger and his band of gun grabbers plans to descend on Chuck's Gun Shop in an effort to get the shop to close down.  Their latest effort involves a planned blockade of the shop on June 6th during which "demonstrators" will prevent you from entering Chuck's to exercise your 2nd Amendment rights.  Needless to say, this is not the kind of activity that you, as a law-abiding firearm owner, should tolerate.

UPDATE: To show his appreciation for the support coming from the gun owner community, owner John Riggio is offering free range time as available on Saturday, plus food and soft drink, coffee, etc.

UPDATE: The Brady Campaign has applied for a permit for their protest with the Village of Riverdale in order to try to keep CCL holders from exercising their rights. The last two protests they held at Chuck's were without a permit, which had no impact on CCW. If granted their permit, which is expected, their protest becomes an event where CCW is prohibited. Expect to see orange plastic fencing demarking where their permitted activity is to take place. If you enter this area to engage the protestors, you are advised not to be carrying.

WHAT YOU MUST DO TO PROTECT YOUR SECOND AMENDMENT RIGHTS

With Lee In Virginia

Another of the Henty books from Robinson Homeschool which Dixie took.

More @ With Lee In Virginia
Posted by Brock Townsend at Thursday, June 04, 2015 No comments:

Via comment by Anonymous on The Muslim respect for women: Mother and daughter ... The investigation of the deadly derailment of Amtrak Train 188 in Philadelphia is continuing and Amtrak has announced it will now be placing cameras to monitor the actions of its engineers [Video Cameras Coming to Amtrak Train Cabs After Philly Crash, by Trevor Mogg, Digital Trends, May 27, 2015]. Unfortunately, they might have their cameras pointed in the wrong direction: vandalism by rock-throwing thugs may be the real cause of the crash. But if so, on past form, our rulers may never tell us.

The May 12, 2015 crash killed eight passengers and injured 200, including several Amtrak crewmembers. Investigators have ruled out mechanical malfunction or rail problems. The locomotive engineer’s drug and alcohol tests have turned out negative.