Lee‘s Letter to His Wife on Christmas Day, 1861 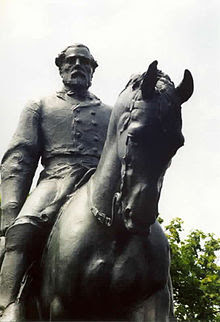 I cannot let this day of grateful rejoicing pass, dear Mary, without some communication with you. I am grateful for the many among the past that I have passed with you, and the remembrance of them fills me with pleasure.  For those on which we have been separated we must not repine. If it will make us more resigned and better prepared for what is in store for us, we should rejoice.

Now we must be content with the many blessings we receive.  If we can only become sensible of our transgressions, so as to be fully penitent and forgiven, that this heavy punishment under which we labor may with justice be removed from us and the whole nation, what a gracious consummation of all that we have endured it will be!

As to our old home [Arlington], if not destroyed it will difficult ever to be recognized. Even if the enemy had wished to preserve it, it would almost have been impossible. I fear, too, books, furniture, and the relics of Mount Vernon will be gone. It is better to make up our minds to a general loss. They cannot take away the remembrance of the spot, and the memories of those that to us rendered it sacred.  That will remain to us as long as life will last, and that we can preserve.

You must not build your hopes on peace on account of the United States going into a war with England [via the Trent Affair].  We must make up our minds to fight our battles and win our independence alone. No one will help us. We require no extraneous aid, if true to ourselves. But we must be patient. It is not a light achievement and cannot be accomplished at once.

The enemy is still quiet [here] and increasing in strength. We grow in size slowly but are working hard.


Merry Christmas from the North Carolina War Between the States Sesquicentennial Commission!

Posted by Brock Townsend at Wednesday, December 25, 2013 2 comments: Links to this post 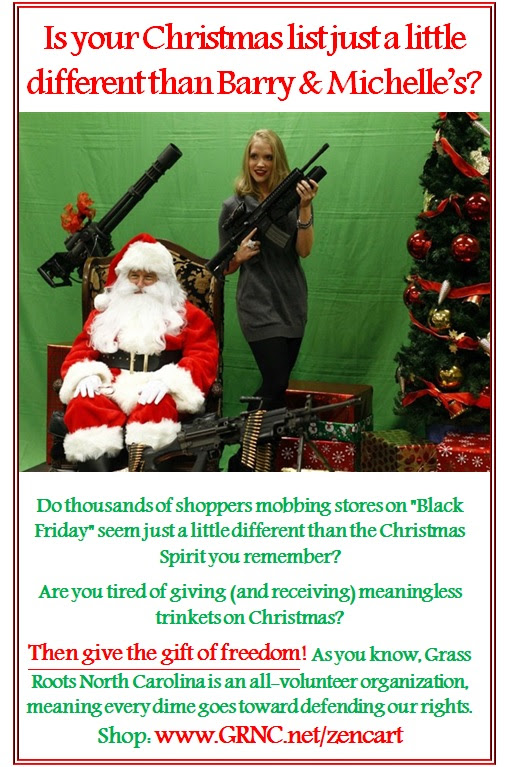 Check out the comments. :)

"Such people are rather insecure and think that they need lots and lots of guns and a closet full of ammunition to defend their home and family against the soon to come "race war". A lot of these people actually believe, and believe rather strongly, that Blacks and Hispanics are now plotting to one day come kill all White people. I've never heard of such talk but their delusion and hyperbole has no boundaries regardless of evidence, or lack thereof, to the contrary."

"Australia solved their massacre problems in the 1970s by locking down guns totally - and they have few gun deaths. Everyone in the US, and NC, are intimidated by a bunch of bullies and thugs whose manhood is in question given their constant need for self ratification by packing guns. Stop calling this the "greatest" nation, when a bunch of corporations and fools intimidate all the politicians, and lots of others, with seriously flawed lies about the Constitution, promoted and paid for by Kochs, gun companies and lots of rich people."

The below media item is in need of your well-informed and polite comments:


Thank you for blasting through anti-gun sentiment, educating the public, and influencing thousands of readers statewide. Your articulate, reasoned and persistent arguments are a critical part of preserving and expanding gun freedom in North Carolina.
Posted by Brock Townsend at Wednesday, December 25, 2013 No comments: Links to this post

Egypt's military-backed interim government on Wednesday declared the Muslim Brotherhood a terrorist group, criminalizing all its activities, its financing and even membership to the group from which the country's ousted president hails.

The announcement is a dramatic escalation of the fight between the government and group, which has waged near-daily protests since the July 3 popularly backed military coup that toppled President Mohammed Morsi.

Hossam Eissa, the Minister of Higher Education, read out the Cabinet statement after long meeting, saying: "The Cabinet has declared the Muslim Brotherhood group and its organization as a terrorist organization."

He said that the decision was in response to Tuesday's deadly bombing targeting a police headquarters in a Nile Delta city which killed 16 people and wounded more than 100.


More @ Fox
Posted by Brock Townsend at Wednesday, December 25, 2013 No comments: Links to this post

Are NY Cops using Armslist to try to develop intelligence on gun owners?

I’m going to post this Armslist entry in it’s entirety.  Make of it what you will.

FOR SALE/TRADE: BEWARE COPS SELLING AMMO TO GET YOUR INFORMATION


BEWARE THERES A SCUMBAG ON HERE SELLING MULTIPLE CALS IN ROCHESTER AND SURROUNDING AREAS!! THIS SCUMBAG AGREED TO MEET THEN I WAS SURROUNDED BY POLICE. THEY SIMPLY INTERIGATED ME AND CHECKED MY PERSONALS. THEY ARE ROUNDING UP GUN OWNERS TO SEE WHAT YOUR BUYING AND WHAT YOU MAY BE FEEDING,ALONG WITH RECORDING YOUR VEHICLE INFORMATION WHICH LEADS TO RESIIDENCE…


THIS GUY HAS MANY POSTINGS OF FIREARMS AND RANTING POSTS I ASSUME TO BLEND IN WITH THE CROWD. THESE COMMUNISTS PIGS ARE GETTING SMARTER EVERYDAY! DONT BUY AMMO ON ARMS LIST UNLESS ITS FROM A REPUTABLE DEALER. IF YOU PICS OF AMMO CANS OR BOXES OF AMMO TAKEN OFF THE INTERNET…STAY AWAY. MY ENTIRE NIGHT WAS WASTED AND NOW THEY HAVE MY PERSONAL INFO ..I REPEAT DO NOT BUY FROM THESE CLOWNS THERE RECORDING EVERYONE TO STRIP YOU IN THE FUTURE AND ARREST NON COMPLIANT AND REGISTERED ARMS AS FOR THE GUY POSTING THESE ROT IN HELL.


YOUR CRUDENTIALS,HOME ADDRESS,VEHICLE INFO, TIME AND EMBARESMENT FOR MY SHITTY AMMO. BUY MY AMMO THEN WELL PULL YOU OVER AND SEE WHAT YOU GOT GOING ON AND GO OVER A LIST OF POSSIBLE FIREARMS YOU MAY OR MAY NOT HAVE.

Via mind jog from Bill 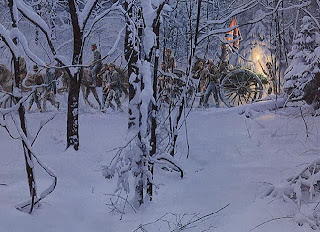 Clickable
Posted by Brock Townsend at Wednesday, December 25, 2013 2 comments: Links to this post

“Monday, December 19th.   Squads of Yankees came all day, so that the servants scarcely had a moment to do anything for us out of the house. The women, finding it unsafe for them to be out of the house at all, would run in and conceal themselves in our dwelling. The few remaining chickens and some sheep were killed. These men were so outrageous at the Negro houses that the Negro men were obliged to stay at their houses for the protection of their wives; and in some instances, they rescued them from the hands of these infamous creatures.

Tuesday, December 20th. A squad of Yankees came soon after breakfast. Hearing there was one yoke of oxen left, they rode into the pasture and drove them up…needing a chain…they went to the well and took it from the well bucket. Mother went out and entreated them not to take it from the well, as it was our means of getting water. They replied: “You have no right to have even wood or water,” and immediately took it away.

Wednesday, December 21st. 10 A.M.  Six of Kilpatrick’s cavalry rode up, one of them mounted on Mrs. Mallard’s valuable gray named Jim. They looked into the dairy and empty smokehouse, every lock having been broken and doors wide open day and night. They searched the servants’ houses; then the thundered at the door of the dwelling. Mother opened it, when one of them presented a pistol to her breast and demanded why she dared keep her house closed, and that “he be damned if he would not come into it.”

She replied, “I prefer to keep my house closed because we are a helpless and defenseless family of women and children.” He replied, “I’ll be damned if I don’t just take what I want. Some of the men got wine here, and we must have some.” She told them her house had been four times searched in every part, and everything taken from it. And recognizing one who had been of the party that had robbed us, she said:

“You know my meal and everything has been taken.”
He said, “We left you a sack of meal and that rice.”

Mother said, “You left us some rice; but out of twelve bushels of meal you poured out a quart or so upon the floor---as you said, to keep us from starving.”

Upon one occasion one of the men as he sat on the bench in the piazza had his coat buttoned top and bottom, and inside we could plainly see a long row of stolen breast jewelry---gallant trophies, won from defenseless women and children at the South to adorn the persons of their mothers, wives, sisters, and friends in Yankeeland!”

Merry Christmas from the North Carolina War Between the States Sesquicentennial Commission!

www.ncwbts150.com   “Unsurpassed Valor, Courage and Devotion to Liberty”
Posted by Brock Townsend at Wednesday, December 25, 2013 4 comments: Links to this post

Posted by Brock Townsend at Wednesday, December 25, 2013 4 comments: Links to this post