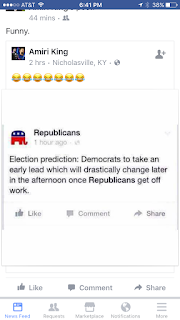 Posted by Brock Townsend at Monday, November 07, 2016 8 comments: Links to this post

From the attics and shoeboxes of Virginia, a trove of historical gold The opening line still hurts across the years.

“Dear Mother — I am here a prisoner of war & mortally wounded.”

John Winn Moseley was writing home from the Gettysburg battlefield on July 4, 1863. He was a 30-year-old Confederate from Alabama being cared for by his Yankee captors.

“I can live but a few hours more at farthest,” he wrote. “I was shot fifty-yards of the enemy’s line.

They have been extremely kind to me.”

Moseley died the next day. His letter — on delicate blue paper, stained with what might be blood — made it to his mother in Buckingham County, Va., and the family kept it ever after.
More @ The Washington Post
Posted by Brock Townsend at Monday, November 07, 2016 2 comments: Links to this post

While most of America was transfixed by Game 7 of the World Series, Fox News Channel was doggedly pursuing a new story: The FBI's probe into pay-for-play schemes at the Clinton Foundation and the State Department has been far more expansive than anyone reported so far and has been going on for more than a year. FBI sources even warned there could be indictments down the road.

Then, The Wall Street Journal broke another new story online, saying, "Secret recordings of a suspect talking about the Clinton Foundation fueled an internal battle between FBI agents who wanted to pursue the case and corruption prosecutors who viewed the statements as worthless hearsay." Senior officials wanted to tell FBI agents to "stand down" from a Clinton Foundation probe.

This is why an overwhelming majority of Americans tell pollsters it's obvious the media are undisguised Hillary boosters.

That's two nuclear explosions in one night. What was the reaction from the news media?


More @ Conservative Review
Posted by Brock Townsend at Monday, November 07, 2016 No comments: Links to this post

(Not) Keeping Up with the Cardassians: The Regime's Failed Show Trial in Portland 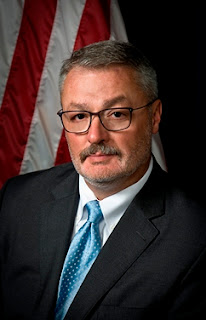 Wallow in your failure, you smug loser.

Cardassia is a fictional planet in the Star Trek universe ruled by a totalitarian state with a court system quite similar to our own. Trials on Cardassia do not to examine the charges against the accused, since a guilty verdict is foreordained. The defendant is assigned an attorney called a “public conservator” whose role is not to represent the interests of his client, but rather to assure “the productive functioning of our courts.”

“I’m here to help you concede the wisdom of the state, to prepare you to accept the inevitable with equanimity,” one conservator explained to a bemused client unfamiliar with the system. “Whatever you’ve done, whatever the charges against you, none of that really matters in the long run…. This trial is to demonstrate the futility of behavior contrary to good order. Everyone will find it most uplifting.”

The federal conspiracy trial of Ammon and Ryan Bundy and five of their associates was supposed to follow the Cardassian script – but the prosecutors lost the plot when they encountered defendants they couldn’t bluff or bully, defense attorneys who conscientiously represented their clients, and a jury that demanded actual proof of the charges being considered.


More @ Pro Libertate
Posted by Brock Townsend at Monday, November 07, 2016 No comments: Links to this post

The Fall of an FBI Director: “The only thing necessary for the triumph of evil is for good men to do nothing.”

Comey is neither thoroughly corrupt nor a career leftist. The FBI Director is simply a coward.

Daniel Greenfield, a Shillman Journalism Fellow at the Freedom Center, is a New York writer focusing on radical Islam.

Every agent of the Federal Bureau of Investigation takes an oath to “support and defend the Constitution of the United States against all enemies, foreign and domestic” and to “bear true faith and allegiance to the same.” And he swears to “faithfully discharge the duties of the office.”

It is much the same oath taken by members of Congress, by military officers and government employees. It is an oath that goes back to Washington and Lincoln. Its origins lie in the Constitution.

Posted by Brock Townsend at Monday, November 07, 2016 No comments: Links to this post

Posted by Brock Townsend at Monday, November 07, 2016 2 comments: Links to this post

Benghazi guards turned on US diplomats in 2012 attack, sources say

John "Tig" Tiegen was there and says guards turned on Americans.

An obscure private firm hired by the State Department over internal objections to protect U.S. diplomats in Benghazi just months before the American ambassador and three others were killed was staffed with hastily recruited locals with terror ties who helped carry out the attack, multiple sources told Fox News.

The explosive charge against Wales-based Blue Mountain Group comes from several sources, including an independent security specialist who has implemented training programs at U.S. Consulates around the world, including in Benghazi, where he trained a local militia that preceded Blue Mountain. The source, who spoke on condition of anonymity, said Blue Mountain used local newspaper ads to assemble a team of 20 guards, many of whom had terror ties, after securing a $9.2 million annual contract.


More @ Weasel Zippers
Posted by Brock Townsend at Monday, November 07, 2016 No comments: Links to this post

Want To Know Why Team Trump Has Been So Positive Of Late? Here’s Why… 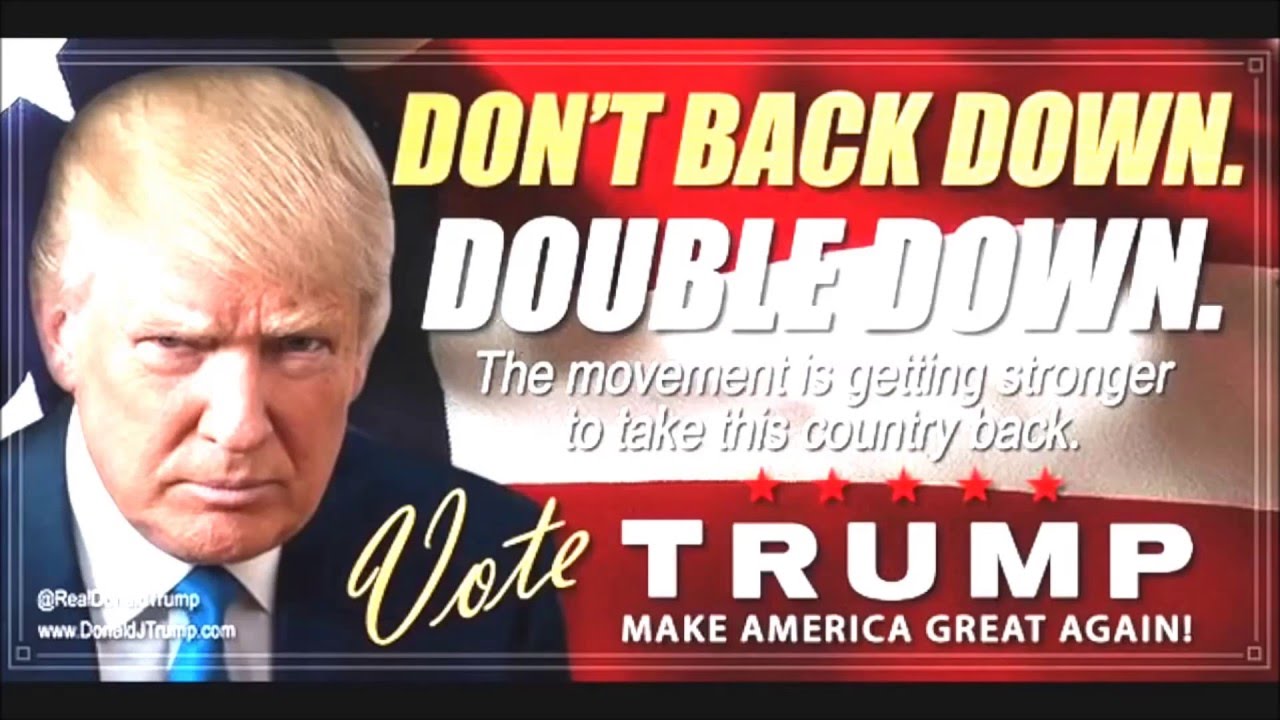 Internal polling data is showing a remarkably strong trend in Donald Trump’s favor over the last week. So much so, Team Trump has been quietly coming to terms with the remarkable prospect of this country’s first 3rd Party candidate winning the presidency.

(That’s right, Donald Trump is as much a 3rd Party/Independent candidate as he is a Republican.)

Call it, “cautiously optimistic” which is far better than the mood inside Team Trump just a month earlier when the same internal polling data was showing Hillary Clinton building what many thought might be an insurmountable advantage.

Word is, the Clinton campaign has all but given up on Ohio, and near to doing the same in Florida, with North Carolina looking suspect for Team Clinton as well.

UPDATE: Newsweek has confirmed to Infowars that the ‘President Madam Hillary’ edition is real but “not for the public” to know about.


Has Newsweek already printed a special “Madam President” issue that is being shipped out even before Americans vote in the presidential election tomorrow?

That’s the question raging amongst Trump supporters, who have been circulating images of the magazine online.

One of the images shows a “special commemorative edition” of Newsweek with Clinton on the cover behind the words “Madam President – Hillary Clinton’s Historic Journey to the White House.”

A highly partisan blurb on a separate page talks about how Hillary defeated “fear and hate-based conservative peddled by Donald Trump” to triumph and ensure that “the highest glass ceiling in the western world had finally shattered.”

A Twitter user who works as a bookstore tweeted the images with the comment, “I work at a bookstore and we typically get magazines early and lookie what we got here.”

Via comment by Unknown Reaper on CIVIL WAR II – FOURTH TURNING INTENSIFYING (PART 2... "Some good news in a depressed society - Janet Reno died.  Think 'Waco' and who fired the first shot. A couple hundred yet to go:" 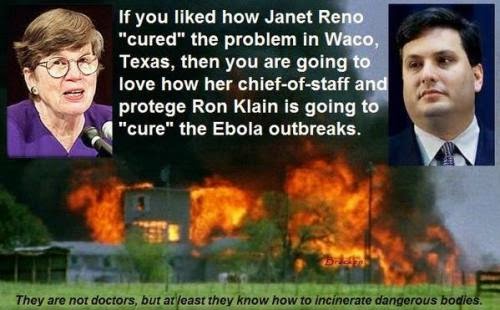 Janet Reno, the first woman to serve as U.S. attorney general and the epicenter of several political storms during the Clinton administration, including the seizure of Elian Gonzalez, died early Monday. She was 78. According to AP, Reno died from complications of Parkinson's disease.

Black Trump Supporters Explain Why They are Voting for DONALD TRUMP

Posted by Brock Townsend at Monday, November 07, 2016 No comments: Links to this post

Wikileaks=> Hillary Camp Openly Plots to Lie to the Press: “Tell Them a Big, Elaborate Lie”


“This is a great way to do a reset with the press – tell them a big, elaborate lie.”

The sad thing is, liberal media hacks take this abuse and dishonesty because pushing the leftist agenda is all that is important.


More @ The Gateway Pundit
Posted by Brock Townsend at Monday, November 07, 2016 2 comments: Links to this post

In Part One of this article I laid out the case against the criminal establishment and how the regeneracy is being driven by the anti-establishment sentiment sweeping across the land. This atonement Fourth Turning will de-establish decade’s worth of delusional decisions. This election has destroyed the last vestiges of trust in this fraudulent system.

This dysfunctional rigged presidential election reflects the tearing of the civic fabric at points of maximum susceptibility. As a country we have neglected, denied, or delayed necessary action on a plethora of vital issues threatening our long term viability as a nation. The deferral of difficult painful decisions has been a ploy of the ruling class, allowing them to further siphon the wealth of a dying empire, while maintaining control over the masses through laws, regulations, taxes, surveillance, intimidation, technology bread and circuses, and mainstream media propaganda.

This is a country truly divided, much along the lines of the first Civil War. The divisions aren’t just along political party lines, but race, education, geography, gender, age, class, religion and ability to think critically. The presidential polls (IBD) reveal many of these divisions clearly:


More @ The Burning Platform
Posted by Brock Townsend at Monday, November 07, 2016 4 comments: Links to this post


“I am shocked that the President of the United States—who is the chief law enforcement officer for the nation and to whom all federal law enforcement officers report—failed to strongly and immediately object to a statement by an interviewer that unlawful immigrants can and should vote in U.S. elections,” Sessions said in a statement. “The interviewer proposed a radical and illegal action, which the President had a duty to condemn.”

“The President must immediately issue a statement to make crystal clear that only citizens of the United States have the right to vote, and that any noncitizen who votes, and anyone who assists noncitizens to vote, does so illegally and is subject to prosecution,” he continued.  “The failure to clarify this statement will only add further credibility to the public’s concerns about the integrity of this election.”

CNN BUSTED! Got Complete List of Questions for TRUMP Interview from DNC

Wikileaks released 8,263 new emails from the DNC in a second mass leak on Sunday.

The DNC planted questions with CNN to ask Donald Trump.

Wikileaks #DNCLeaks2: CNN Colluded with DNC in Interview Attacks on Trump and Cruz
Posted by Brock Townsend at Monday, November 07, 2016 No comments: Links to this post


Posted by Brock Townsend at Monday, November 07, 2016 No comments: Links to this post