House Majority Whip Steve Scalise, R-La., who was shot at Republican baseball practice during the summer in Alexandria, Va., said that his experience has only solidified his views concerning gun control.

"Inevitably questions about the Second Amendment are raised by what happened in Las Vegas," Fox News' Martha MacCallum said in an interview Tuesday, referring to the mass shooting there Sunday night. "It happens almost immediately. Have you, your experience of your own and what you saw in Las Vegas, has it changed how you feel about any of that?"

"I think it's fortified it because first of all you've got to recognize that when there's a tragedy like this, the first thing we should be thinking about is praying for the people who were injured and doing whatever we can to help them, to help law enforcement," Scalise said. "We shouldn't first be thinking of promoting our political agenda."

"Our next engagement was at a place called Turkey bend, or Turkey Hill. Wilcox's Division was fighting in front of us, and a heavy body of Federals were moving on his left flank. We were preparing to meet them, throwing up some temporary breastworks under a sharp skirmish fire.

Lieutenant W.C. Howard, of Company F, Forty-eighth, was killed. Some four or five men wounded, were, I think all of those lost by the Forty-eighth in this engagement. The enemy was moving in line of battle to our right. We were ordered to move in quick time and make no noise. While on this rapid march an amusing incident occurred, which I will relate:

We were passing through a ravine where some Yankee prisoners were under guard. A very large, gruff looking Yankee was standing up slurring the rebels. He asked: 'Why do you rebels wear such dirty, ragged clothes?' An Irishman by the name of Forrest, belonging to Company D, Forty-eighth Regiment, and as good a soldier as was in the regiment, answered: we Southerners always put on our sorriest clothes when we kill hogs, and it is hog killing day with us now,' pointing to a dead Yankee near by.
This wit of the Irishman caused a laugh, and forgetting the order to be quiet, some two or three men raised a yell, which was taken up along the line - a regular rebel yell. The enemy's lines halted, broke and fell back, so we did not get into any further engagement. Whether it was this yell that caused them to fall back, I cannot say, but I don't suppose they knew we were near them until the yell betrayed our whereabouts." A review of Braxton Bragg: The Most Hated Man of the Confederacy by Earl J. Hess, University of North Carolina Press, 2016.

In Braxton Bragg: The Most Hated Man of the Confederacy, prolific Civil War historian Earl J. Hess attempts the near impossible task of resurrecting the reputation of one of the Civil War’s most disparaged generals. Many contemporaries and historians alike have long considered Braxton Bragg to be one of the most incompetent and ineffective generals of the Civil War. Much of the criticism directed towards Bragg tends to focus on his battlefield failures and his reputation as a fierce disciplinarian who would execute soldiers under his command for minor offenses.

Hess challenges the popular opinion of Bragg and seeks to defend many of his actions in order to present a balance view and a “sense of historical justice.” (xx). Hess’ biography focuses primarily on Bragg’s Civil War career and places little emphasis on the general’s prewar life. The author’s intention was not to write a general biography, but to examine his Civil War career. In doing so, Hess examines the general’s actions from his first command at Pensacola in 1861 through the fall of the Confederacy and places major emphasis on the general’s relationship with his subordinates because it had a dramatic impact on his performance during the war.

Sheriff Says Las Vegas Shooter Could Have Been “Radicalized”

During a live press conference, Clark County Sheriff Joe Lombardo revealed that the Las Vegas gunman, Stephen Paddock, may have been “radicalized” and that authorities were attempting to uncover the source of his radicalization.

“Did this person get radicalized unbeknownst to us? And we want to identify that source,” said Lombardo.

Rapper: White People Are 'The Reason Why Guns Are A Problem'

On Monday, only hours after the horrific massacre in Las Vegas, Rapper Lil B decided to execute a racist hit-and-run on Twitter, slamming whites in a race-based series of tweets, accusing “white people” of being the “reason why guns are a problem.” Lil B’s rant went like this:

Another Advertiser Pulls Ads Due to NFL “Take a Knee” Protests

Another advertiser is finished with the National Football League (NFL) after the ongoing kneeling controversy. Players have continued to protest the National Anthem and our police officers, even after the deadly mass shooting Sunday night in Las Vegas.

Now, Flemington Car and Truck Country – a massive car dealer in New Jersey – will pull all their ads for the remainder of the football season.

Owner Steve Kalafer said in a statement the American flag protests are disrespectful, and he will not support them with his advertising dollars anymore: “The National Football League and its owners have shown their fans and marketing partners that they do not have a comprehensive policy to ensure that players stand and show respect for America and our flag during the playing of the national anthem. We have canceled all of our NFL advertising on the Optimum and Infinity (cable) networks.”


More @ The Political Insider
Posted by Brock Townsend at Tuesday, October 03, 2017 No comments: Las Vegas shooter Stephen Paddock wired $100,000 to an account in his live-in girlfriend’s home country, the Philippines, in the week before he unleashed the worst mass shooting in modern U.S. history, according to multiple senior law enforcement officials.

But while officials have confirmed that Marilou Danley was in the Philippines on Sunday when Paddock opened fire on a crowd attending a country music festival on the Las Vegas Strip, it was not known whether the money was for her or her family or for another purpose.

"You cannot ban guns in the United States.' 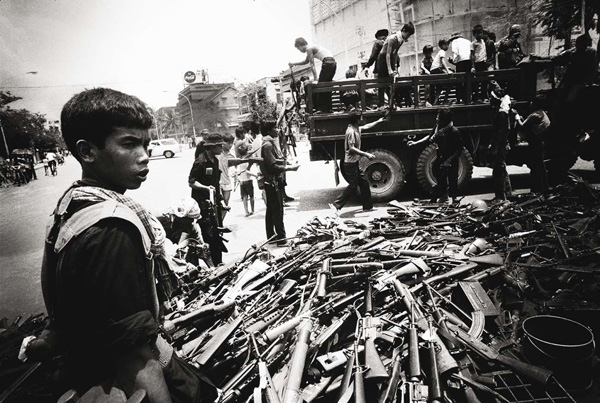 Khmer Rouge soldiers gathering weapons in Cambodia. How did "gun control" work out for them?

No laws in effect have been effective in stopping gun crime for the simple and obvious reason that criminals don't care about laws. Many who engage in mass shootings have no intention of surviving the experience, so they have no reverence at all for some crime they might commit. You can't prosecute a corpse.

It is so infuriating to suffer the stupidity of the left time after time. The issues are not in dispute by any logical, thoughtful person seeking the truth. Chicago as an example of the leftist utopia that it has been for a century demonstrates that all of their collectivist impulses toward immigration, gun laws, taxes and education prove the fallacy of their arguments. But, collectivists never acknowledge the facts or the truth, they spend all of their time in the future, where everything is better and all of their fallacious beliefs have resulted in an utopian existence. The reason the future is so alluring to them is the present, their present, the present created by their unwillingness to accept some obvious truths is hell.

During that episode, one liberal panelist defended attacking non-violent Nazis, and the other liberal called for shredding the first amendment.

Posted by Brock Townsend at Tuesday, October 03, 2017 No comments: