Posted by Brock Townsend at Wednesday, May 09, 2018 No comments:

In Search of the Real Abe Lincoln No one interested in American history can escape Abraham Lincoln. Over the years the outpouring of books, articles, essays, and poems has been enormous, so much so that this form of activity is sometimes referred to as “the Lincoln industry.” With all of this attention devoted to one man, how can there be a “Lincoln puzzle”? Surely all Americans know him — walking for miles to borrow (or return) books, reading by firelight, splitting fence rails, wrestling with the boys (always winning) — this simple, rugged, honest son of the frontier, a man of the people, called by them to save the Union and free the slaves, presiding with melancholy anguish over a long and bloody war, comforting Mrs. Bixby for the loss of her sons. Is this not what they see when they go to the Lincoln Memorial and look up at that brooding giant whose somber gaze seems to penetrate the very meaning of life? Where is the puzzle?

What Americans see is the legendary Lincoln, who began to take shape when he was assassinated by John Wilkes Booth on Good Friday.


More @ The Abbeville Institute
Posted by Brock Townsend at Wednesday, May 09, 2018 5 comments: 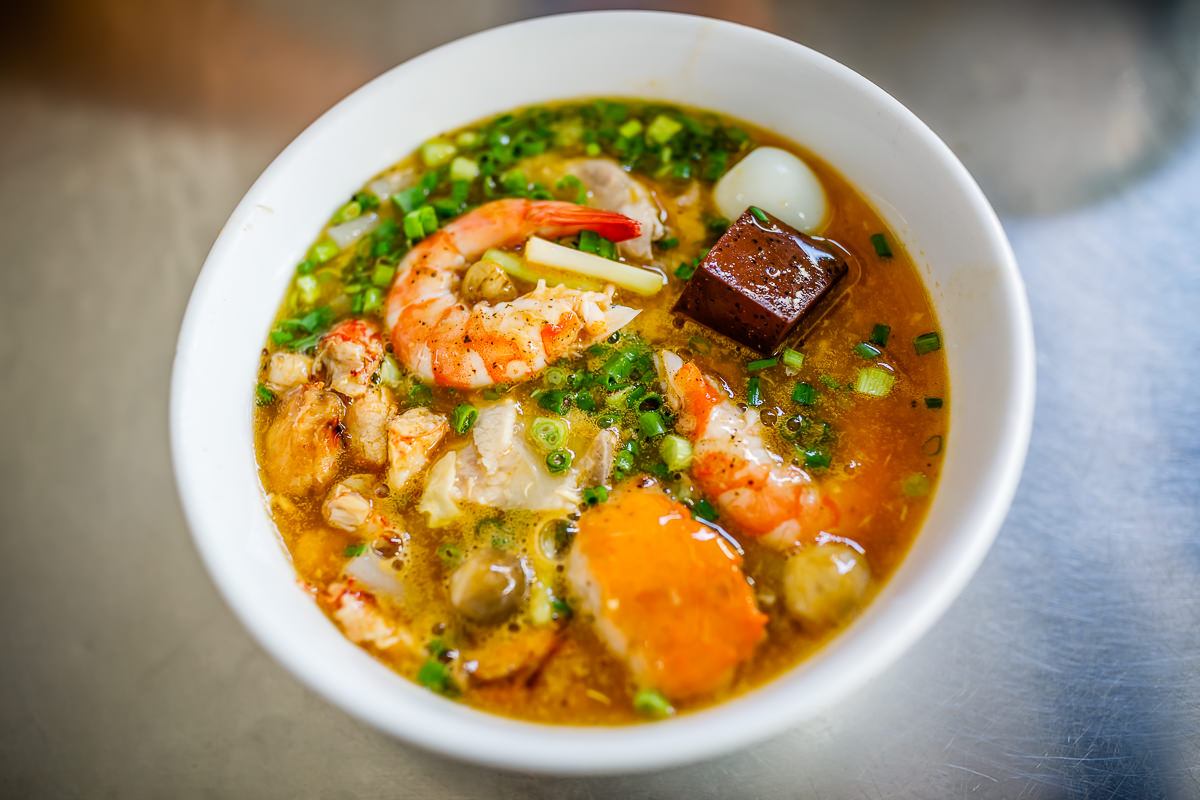 Bánh canh, at times described as Vietnamese udon or even “mouse-tail noodles,” is a great mystery on its own. Etymologically speaking, bánh canh translates to “soup-cake,” and these thick, cylindrical noodles made with tapioca and rice flour of varying ratios do invoke a sense of cognitive dissonance.
Accompanied by a pescetarian acquaintance, we set out to discover an establishment serving what has been described to me as a “bánh canh that would render all other bánh canh [undesirable].”

Our orders came within a minute and the bowl of noodles was nicely assembled, containing all of the components that make a truly Saigonese bánh canh irresistible.

Each portion includes two large shrimps, a crab cake, de-shelled crab and straw mushrooms all topped with blood pudding (huyết) and a quail egg. The vendor also offers quẩy, known in English as “Chinese donuts” or “oil-sticks,” to complement the signature thick and savory broth of Saigonese bánh canh cua. Banh Canh 87’s liberal use of straw mushrooms results in an unmistakably clean and umami aftertaste.


More @ Saigoneer
Posted by Brock Townsend at Wednesday, May 09, 2018 No comments:

Vietnamese Communists 'dynamiting' history as did the Taliban 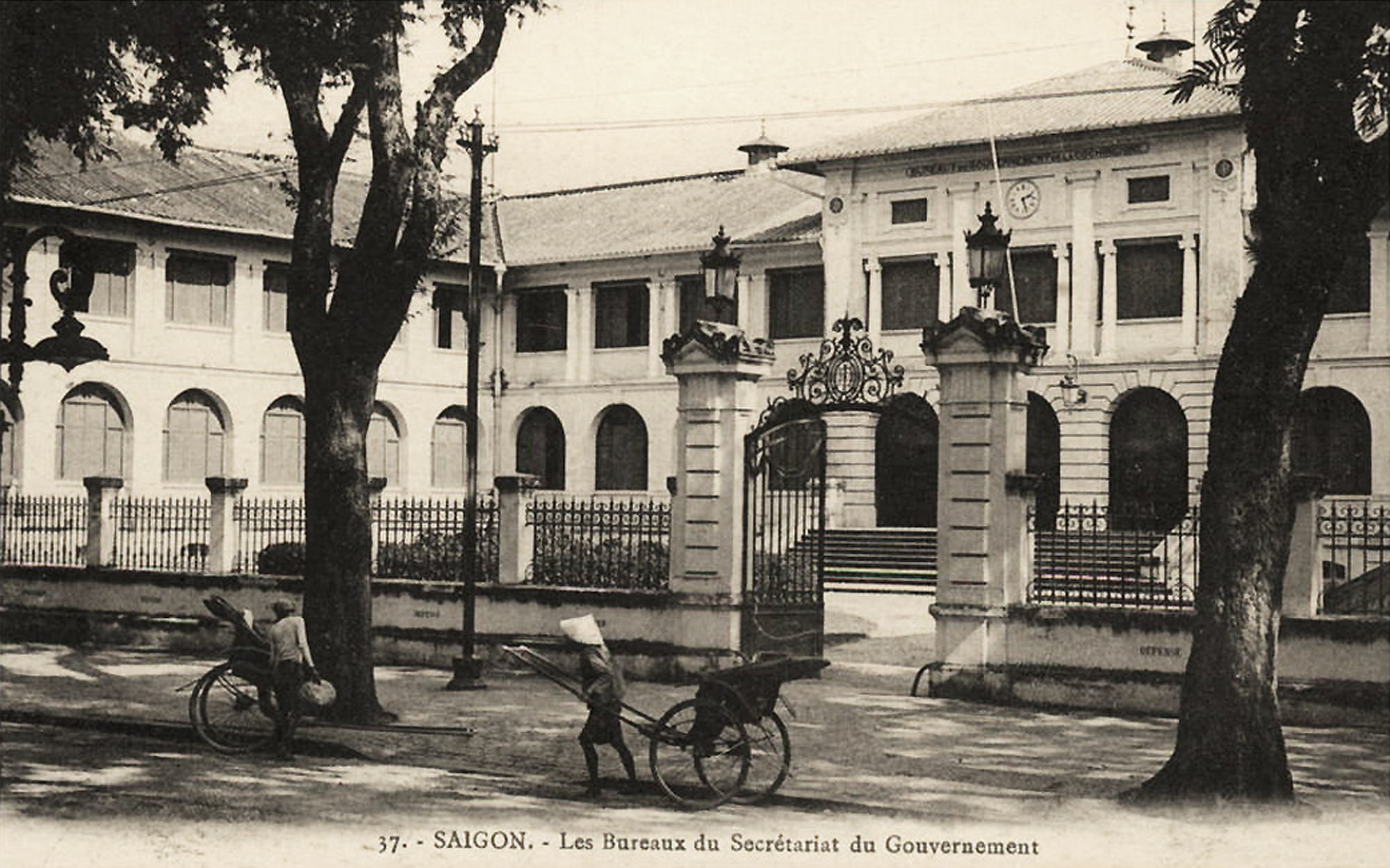 Date With the Wrecking Ball: Thủ Thiêm Parish Church and Lovers of the Holy Cross Convent

Date With the Wrecking Ball: The Cercle Sportif Saigonnais

Posted by Brock Townsend at Wednesday, May 09, 2018 No comments: 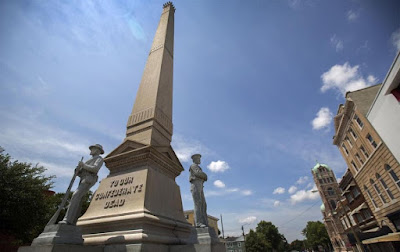 Congratulations to Fred Taylor and the Stonewall Camp #380 ! #winning

Judge William S. Moore, Jr., Chief Judge of the Portsmouth Circuit Court, has dismissed the claims brought by the City of Portsmouth against the Stonewall Camp #380, Sons of Confederate Veterans.

In October of 2016, the City of Portsmouth had sought a declaratory judgment to establish its ownership of Portsmouth's Confederate monument and authority to relocate the monument.  The Stonewall Camp filed a demurrer to the City's Complaint, and challenged these claims in a hearing held on March 5.

Noting that the City's claim sought a "de facto advisory opinion" from the Court, Judge Moore in a May 1 Opinion and Order rejected the City's assertion that it had brought a proper claim before the Court.  Furthermore the Judge noted in his opinion that the City's allegations failed to establish sufficient facts to seek a declaratory judgment.

Stonewall Camp attorney, Fred D. Taylor, Esq., was pleased with the ruling and stated that the Court's decision was a "clear vindication of the law and monument protection."

The Forgotten Legacy of the American Iliad-Beneath the Southern Cross

At Stone Mountain, Georgia, a gigantic granite dome rises 826 feet above the surrounding area and extends nine miles underground. It is one of the largest exposed pieces of granite in the world, although technically it is not granite; it is quartz monzonite rock. On its almost vertical north face is the largest bas-relief in the world. Towering 400 feet above the ground and recessed 45 feet into the mountain are the horseback figures of the Confederacy’s three most revered leaders: President Jefferson Davis and Generals Robert E. Lee and Stonewall Jackson. In addition to their political and military prominence, these men were also famed for the depth, sincerity, and consistent practice of their Christian faith.

A recently released report by the Federal Bureau of Investigation credits armed citizens with saving lives. “Active Shooter Incidents in the United States in 2016 and 2017” was released  in April, and provides hard evidence that gun-grabbers who ridicule the efficacy of keeping and bearing arms are demonstrably agenda-driven liars.

“The FBI defines an active shooter as one or more individuals actively engaged in killing or attempting to kill people in a populated area,” the report continues. “Implicit in this definition is the shooter’s use of one or more firearms. The active aspect of the definition inherently implies that both law enforcement personnel and citizens have the potential to affect the outcome of the event based upon their responses to the situation. “

And how have citizens “affected the outcome”?

“Eight shooters were stopped by citizens,” the report documents, up from six credited in a 2014/2015 report:

NC: "All politicians have their price." 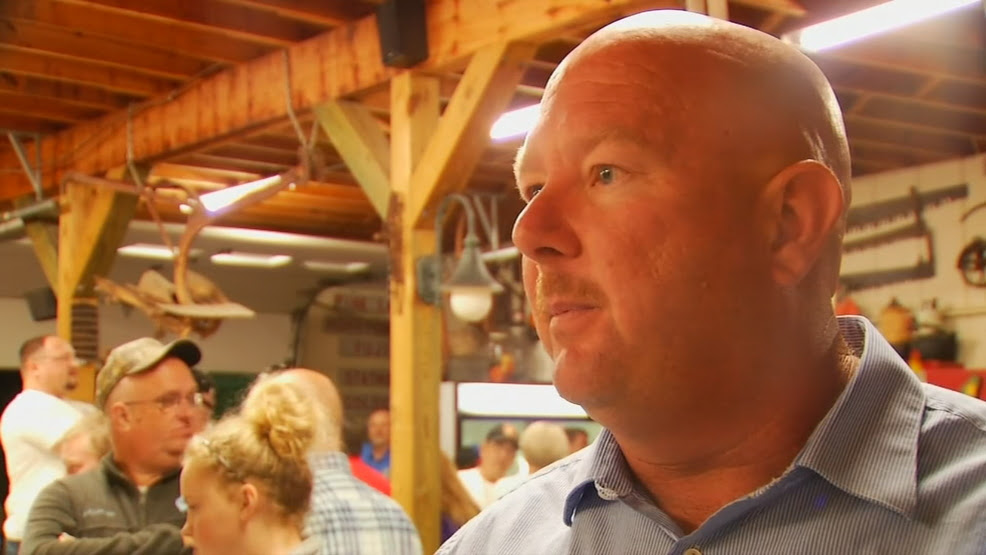 We had out election yesterday here and there were only 2 candidates, both republicans, for the county sheriff. The incumbent Charles MacDonald and a guy named Lowell Griffin who was fired after 20+ years in the Henderson county sheriffs department back in 2014 by MacDonald after he was elected.

I went on the opinion of several locals that MacDonald was an ineffective sheriff and just a publicity hound and voted for their choice Griffin who I didn't know from Adam, but he seemed like a 'good ole boy". Griffin proceeded to win by 2,000+ votes.

Today he appeared on the 5 PM local ABC affiliate news and was interviewed about several things.

When the ABC affiliate interviewer (a Liberal, of course) asked him what he had planned for illegal aliens he came right out and said: Our county depends heavily on farm labor so he'll basically ignore their "status" as illegals and ignore them. Looks like the agricultural cartel met his "price" alright.

Of course the ABC website has a post on him but fails to mention his "illegal alien" comments.

I should have learned my lesson back in the day when I voted for the loser Barry Goldwater. All politicians have their price. 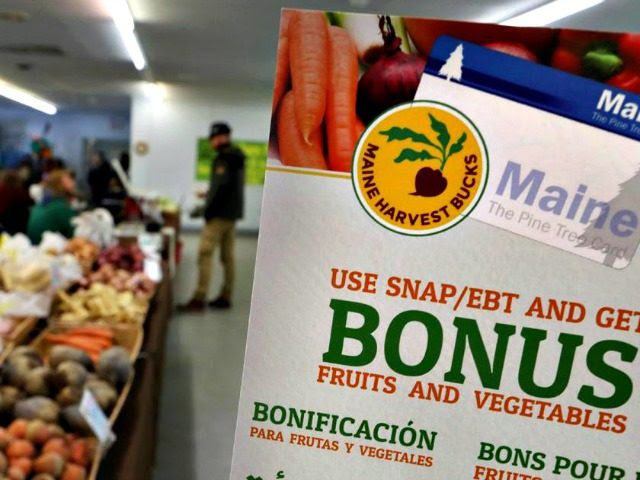 Food stamp enrollment dropped by more than 1.3 million in just two months, according to the latest data from the U.S. Department of Agriculture (USDA).

Food stamp enrollment has dropped by more than half-a-million for the second month in a row in fiscal year (FY) 2018; last month’s data showed that 608,039 discontinued their participation in SNAP.


More @ Breitbart
Posted by Brock Townsend at Wednesday, May 09, 2018 No comments:

Speaking Ill Of The Living

Via comment by JWMJR on Stephen Hawking's Last Words: We Live In 'The Matr... 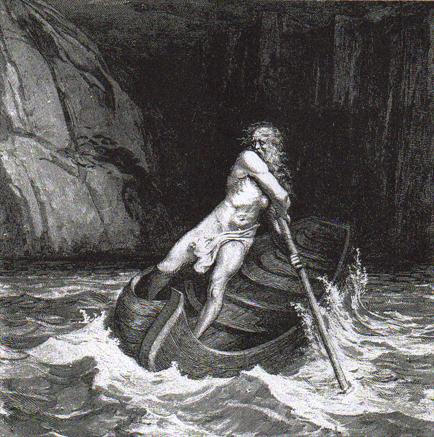 They say don't speak ill of the dead so I'm going to get this off my chest while John McCain is still among us and before Charon drags him, kicking and screaming onto the ferryman's barge that will carry him across the River Styx.

John McCain may have served his country honorably in VN. But that does not grant him a pass on his subsequent behavior in the realm of politics. Perhaps his origional intent was to continue serving the nation but sadly he breathed deep the poisonous swamp gas of DC and all to quickly and it seems eagerly, succumbed to its lure of power.

Stephen Hawking's Last Words: We Live In 'The Matrix'?

Before he passed away in March, renowned physicist Stephen Hawking had published more than 230 articles on the birth of the universe, black holes and quantum mechanics. But, ten days before his death, Hawking finished his final theory on the origin of the universe  – now published posthumously – and it offers an interesting departure from earlier ideas about the nature of the “multiverse.”

Few political observers worth their salt in America these days believe that Robert Mueller’s prolonged investigation into the #RussiaGate conspiracy theory is going anywhere worthwhile, yet the mainstream media insists on covering every minute detail of the probe as though their lives depend on it.

This could be more true than not, given the horrendous decline and decimation of the liberal media in recent months, kicked off by their own inept bias being weaponized in the wake of America’s conservative enlightenment.  These harbingers of harmful spin are the dinosaurs of our age, and they’ve seen the meteor called “The Internet” coming for a good long time.  They’ve chosen not to evolve, and are currently throwing a temper tantrum, live, on-air, for the entirety of their 24/7 cycle.


More @ Constitution
Posted by Brock Townsend at Wednesday, May 09, 2018 2 comments: 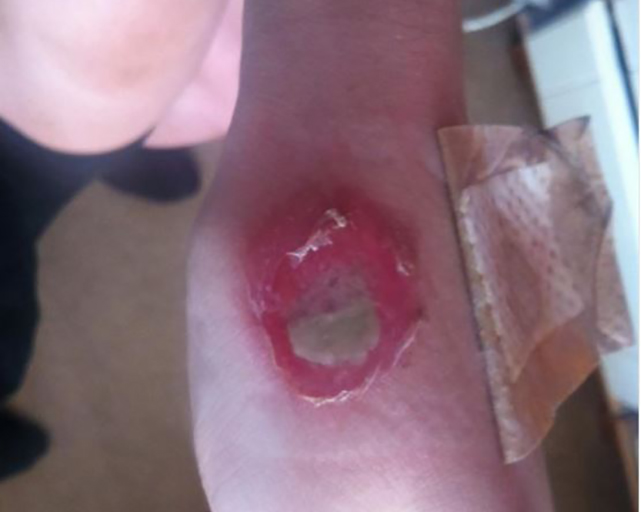 The latest viral teen challenge is leaving kids with burns so severe some require hospitalization.
The "Deodorant Challenge" dares kids to spray aerosol deodorant onto their bare skin or onto someone else's bare skin for as long as they can stand it, with the aerosol rapidly cooling the skin and causing a frostbite condition similar to a burn. A 15-year-old in South Gloucestershire, England is still recovering after taking part three weeks ago. The burns are so severe on her arm she may need a skin graft, the teen's mom Jamie Prescott, said on Facebook.