“Conservative” writer and classicist Victor Davis Hanson hates the Confederacy and the South; he has demonstrated this repeatedly in recent years through his articles published in National Review (where he is a senior contributor) and in other venues (see, for example, “Sherman’s War,” November 9, 1999; “California Goes Confederate,” Jewish World Review, February 9, 2017;  “The Strange Case of Confederate Cool,” National Review, September 26, 2017; and “The Confederate Mind,” National Review, March 20, 2018.

His most recent anti-Confederate broadside showed up in the so-called “conservative journal of opinion,” National Review [March 20], where he made the accusation that Senator Elizabeth Warren, the extreme Left US senator from Massachusetts, was “acting like Confederates did back in 1861” and that she possessed a “Confederate Mind.” I offered a short response via my blog, part of a longer column. That column—the portion about Hanson—was picked up by my friend and columnist Ilana Mercer and published on her Barely-a-blog site.

Posted by Brock Townsend at Thursday, April 12, 2018 No comments:

On April 8, after learning of the alleged Syrian regime's use of chemical weapons against a civilian neighborhood, President Trump tweeted that Syrian President Bashar Assad would pay a “big price.”

The last time the Syrian government so blatantly used chemical weapons, Trump ordered a barrage of Tomahawk cruise missiles to strike at the base responsible for the chemical weapons attack. In the wake of the latest incident, however, many analysts have pointed out that last year’s response neither deterred Assad nor undercut his momentum against the Syrian opposition and questioned whether a new missile barrage would be any different.

President Trump’s new executive order on welfare reform has laid the groundwork to get more Americans back to work while protecting and strengthening the safety net for the truly needy. Federal agencies must take advantage of this opportunity to roll back harmful Obama-era policies that have trapped families in dependency and cost taxpayers billions.

Right now, America combines near-record-low unemployment with near-record-high welfare dependency — the result of state-level eligibility exemptions, federal loopholes and policies that put work on the back burner. Many of these policies created incentives for able-bodied adults to sit on the sidelines — even though there is good, well-paying work to be done. The resulting safety net isn’t a safety net at all — it has entrapped able-bodied adults in dependency and threatened resources for the truly needy.

Dershowitz believes the government stepped over the line when they raided Cohen and said it would be naive to believe the FBI would keep the information confidential.

“Even if the lawyer engaged in fraud, that doesn’t justify seizing the client’s secret information, which may not have been involved in fraud,” Dershowitz said on Fox News’ “America’s Newsroom” Thursday.

“Let me take a hypothetical.

“After numerous unfulfilled requests for an Electronic Communication (EC) related to the opening of the FBI’s Russia counterintelligence probe, Chairman Trey Gowdy and I met this afternoon with Deputy Attorney General Rod Rosenstein. During the meeting, we were finally given access to a version of the EC that contained the information necessary to advance the Committee’s ongoing investigation of the Department of Justice and FBI.

“Although the subpoenas issued by this Committee in August 2017 remain in effect, I’d like to thank Deputy Attorney General Rosenstein for his cooperation today,” he said.

As to what was in the document, a House Intelligence Committee told Breitbart News: “There are things there we want to investigate further.”

Nunes had first subpoenaed that and other documents from the DOJ and FBI in August. But while the Justice Department had allowed access to other documents, they had stonewalled on allowing access to the document that started the FBI’s Trump-Russia investigation, even after repeated meetings, phone calls, and emails.

Meanwhile, “current and former” law enforcement officials had leaked to the New York Times on December 30 that the investigation was started after an Australian diplomat had a conversation with former Trump campaign adviser George Papadopoulos and reported it to U.S. intelligence.
The story sought to minimize the role the Trump dossier — which was funded by the Clinton campaign and the Democratic National Committee — in starting the investigation.

Posted by Brock Townsend at Thursday, April 12, 2018 No comments:

Russia-24 (Россия-24), a state-owned Russian-language news channel from Moscow, spent five minutes on Tuesday advising its viewers how to prepare for a nuclear war amid the increasing tensions with the United States over Syria. The television anchor urged the country’s citizens to purchase essential items and emergency supplies to stock their bomb shelters.

The title of the television broadcast “Inviolable stock: what should I take with me to the bomb shelter?,” explains how a nuclear war with the United States would be “catastrophic,” as a TV anchor from Russia-24 informed citizens how to get ready for World War III.

On The Threshold of War 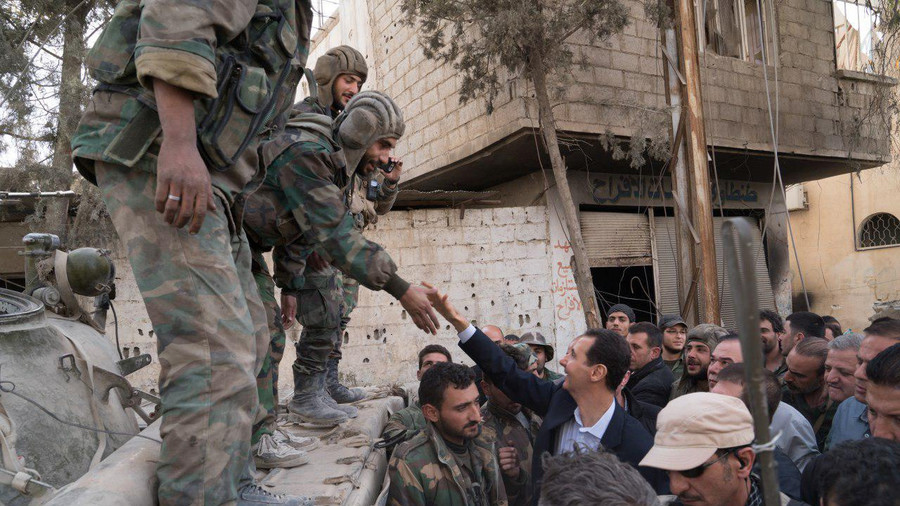 There is no longer any doubt that the criminally insane government in Washington is driving the world to the last war.

No doubt Douma ‘chemical attack’ staged, OPCW must investigate on ground in Syria

No trace of chemical weapons at alleged attack site in Douma

False information is being planted about the alleged use of chlorine and other toxic agents by the Syrian government forces. The latest fake news about a chemical attack on Douma was reported yesterday. These reports are again referenced to the notorious White Helmets, which have been proved more than once to be working hand in glove with the terrorists, as well as to other pseudo-humanitarian organisations headquartered in the UK and the US.

It seems anti-gunners really want to end the private ownership of guns. Sure, right now they’re ramping up the pressure on the AR-15, but they will eventually spread to all guns once they secure that beachhead.

But let’s also be honest for a moment. They really don’t have the votes to make this happen, and they know that even if a blue wave sweeps through Congress, they’re still not going to have the votes.

6 Simple Reasons Why Trump Is Going To War In Syria?

POTUS Trump knows that the chemical attack in Syria is a hoax and false flag.

The mainstream media knows that the chemical attack in Syria is a hoax and false flag.

All of Congress knows that the chemical attack in Syria is a hoax and false flag.

The entire world knows that Assad is not that stupid (he is a doctor and ophthalmologist) so as to gas women and children at the very moment he is winning the war in Syria…launching a chemical weapons strike for shits and giggle, moments after Trump announced a US pullout from Syria.