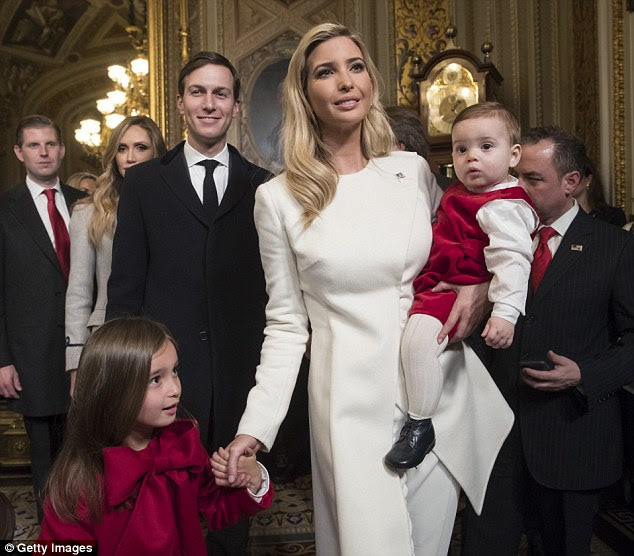 Six weeks ago, Ivanka Trump was sitting with her husband and their three young children aboard a commercial JetBlue flight departing from JFK airport.

‘Your father is ruining the country!’ he bellowed, as he held his own baby in his owns.

Then he screamed at JetBlue staff. ‘Why is she on our flight? She should be flying private!’

Goldstein’s husband, a Hunter College professor named Matthew Lasner, tweeted gleefully from the plane seconds before the incident: ‘Ivanka and Jared at JFK T5, flying commercial. My husband chasing them down to harass them.’ He added the hashtag #banalityofevil.

The pair of them, with their baby, were removed from the plane.

It’s hard to imagine more snivelling, sickening and cowardly behaviour towards a young mother as she sat quietly with her small children.

Yet it perfectly typified the vile liberal assault on Ivanka Trump from the moment her father Donald decided to run for president - an assault that has escalated dramatically since he won the race for the White House.

Let’s be absolutely clear: right now in America, an insidious, ugly and brutal war is being waged to destroy Ivanka Trump and her brand. This week, leading retailer Nordstrom confirmed it was dumping her fashion label from its stores.

Who Will Speak for Those Who Cannot? 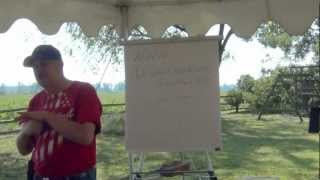 Since the dawn of life on our planet, animals have formed herds, prides, flocks, colonies, clutches, or gaggles.  An animal, by instinct, seeks the protection and safety of the “group” for social interaction and to increase its chances to survive as an individual and to reproduce and propagate its species.

Human behavior follows that same pattern.  Few of us can live completely alone, isolated from the companionship and counsel of our kind.  For most of us, social interaction is an essential part of existence and a necessity for thriving and attaining success in life.  Our intelligence and ability to communicate in a variety of ways, makes social interaction in human groups so much more complex and intricate.

Membership in a group, whether in nature or as human beings, often requires a new member meet certain criteria and follow specific rules.   There is, however, a subset of behaviors and rules that leadership may assume a new member possesses without having to ask, namely, loyalty, respect, and a willingness to protect fellow members and the group as a whole from harm.

I am trying to sell this for an *0 Year old Pastor Friend of mine that is going to a retirement Home and needs the money. If anyone interested please let me know. I have it posted on Craigslist.

1870 hand colored engraving of Robert E. Lee, over an inscription reading SOLD BY AUTHORITY OF THE LEE MEMORIAL ASSOCIATION FOR THE ERECTION OF A MONUMENT AT THE TOMBE OF GENL. R.E. LEE AT THEWASHINGTON & LEE UNIVERSITY, LEXINGTON, VIRGINIA". Engraved by A. B. Walter, after a photo from life. Lower margins with facsimile signatures of Lee; Gen. W. Pendleton, Chairman; and Chas. A. Davidson, Secretary. Stamp on back for Johnson's, Capital Blvd, Nashville. Wooden frame. Sight: 27-3/8" x 23-1/2", Framed 30" x 26". Note: Pendleton acted as Lee's artillery chief during the Civil War and became chairman of the Lee Memorial Association afterwards, dedicating himself to preserving Lee's "sacred memory." This print was sold during a lecture tour in the 1870s in order to help pay for a memorial monument in Lee's Chapel.
Posted by Brock Townsend at Friday, February 10, 2017 No comments: Links to this post 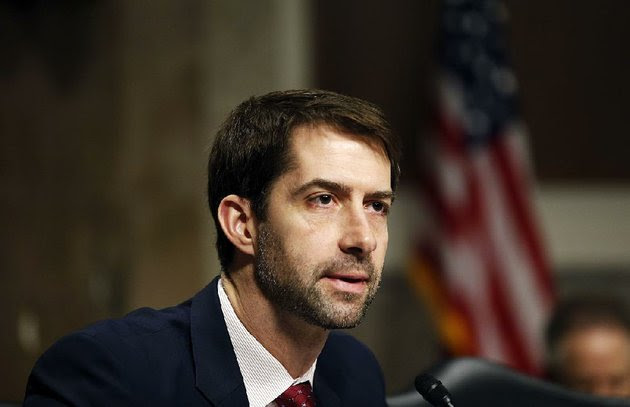 Called the Reforming American Immigration for Strong Employment Act, the measure would eliminate a lottery system that awards U.S. permanent resident cards to 50,000 people each year.

In addition, it would cap the number of refugees at 50,000 per year.


More @ Arkansas
Posted by Brock Townsend at Friday, February 10, 2017 No comments: Links to this post

The Washington Post recently obtained an 11-page “white paper” written by the second-highest-ranking official at the Bureau of Alcohol, Tobacco, Firearms and Explosives (ATF) that proposes 15 policy changes, including the deregulation of suppressors and firearm imports, and a clarification of the infamous “arm-brace” rule.

But gun enthusiasts are most excited about several of Turk’s individual proposals.


More @ Guns America
Posted by Brock Townsend at Friday, February 10, 2017 No comments: Links to this post

Executive Order Signed By Trump Will Take Aim At MS-13


President Trump signed an executive order Thursday that targets transnational criminal organizations such as drug cartels and street gangs like MS-13, which is directed by its leaders in El Salvador.

An affidavit from an FBI special agent last year highlighted the transnational nature of MS-13.

“MS-13’s primary functioning principles center on violence, including murder, and a strict military structure of communication and command, headquartered in El Salvador and spread throughout various ‘programs’ and ‘cliques’ in the United States,” FBI special agent Jeffery Wood wrote.

The gang, known for its brutal violence, has been recruiting young illegal immigrants in the U.S. from the Salvadorian community. Lou Gentile, a former officer with the organized crime unit of the Pennsylvania State Police, told Fox Latino that MS-13 “functions like all immigrant organized crime groups,” and targets “their own community.”


More @ The Daily Caller
Posted by Brock Townsend at Friday, February 10, 2017 2 comments: Links to this post 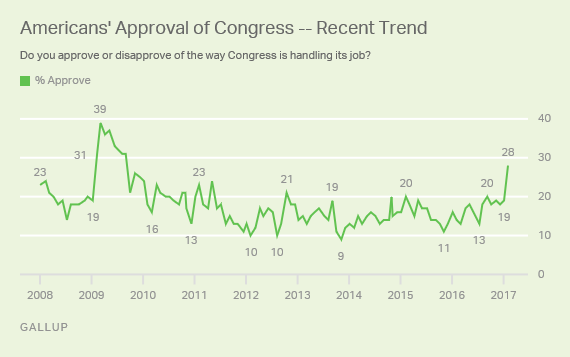 President Trump's agenda, which is winning public support, is doing wonders for congressional approval ratings, now at the highest level since Barack Obama was in his first year in office.

A new Gallup survey revealed a one-month 12 point surge to 28 percent and a massive 50-point approval rating among Republicans apparently satisfied with House and Senate efforts to back up the president.

Posted by Brock Townsend at Friday, February 10, 2017 No comments: Links to this post

Over 200 Inauguration Day Rioters Indicted: Face fines up to $25K and maximum 10 years in prison.


Radically anti-American protesters who took to the streets on the day of Donald Trump’s inauguration were told they’d be in big trouble.

Today, over 200 protesters have been indicted.

NBC News has reported that 209 people have thus far been indicted over felony rioting charges, meaning they face a fine of up to $25,000 and a maximum of 10 years in prison.

The Washington Post reported that 230 people were arrested during President Donald Trump’s inauguration on January 20, with several cases being subsequently dismissed.

Posted by Brock Townsend at Friday, February 10, 2017 No comments: Links to this post

77% of refugees allowed into U.S. since travel reprieve hail from seven suspect countries


The State Department has more than doubled the rate of refugees from Iraq, Syria and other suspect countries in the week since a federal judge’s reprieve, in what analysts said appears to be a push to admit as many people as possible before another court puts the program back on ice.

A staggering 77 percent of the 1,100 refugees let in since Judge James L. Robart’s Feb. 3 order have been from the seven suspect countries. Nearly a third are from Syria alone — a country that President Trump has ordered be banned altogether from the refugee program. Another 21 percent are from Iraq.
By contrast, in the two weeks before Judge Robart’s order, just 9 percent of refugees were from Syria and 6 percent were from Iraq.

“There’s no doubt in my mind they would be doing whatever they could to get people in before something changes because, from their perspective, their motivation is to resettle these folks. It would not be the first time that State Department officials have prioritized facilitating someone’s entry to the United States over security concerns,” said Jessica Vaughan, policy studies director at the Center for Immigration Studies.


More @ The Washington Times
Posted by Brock Townsend at Friday, February 10, 2017 2 comments: Links to this post 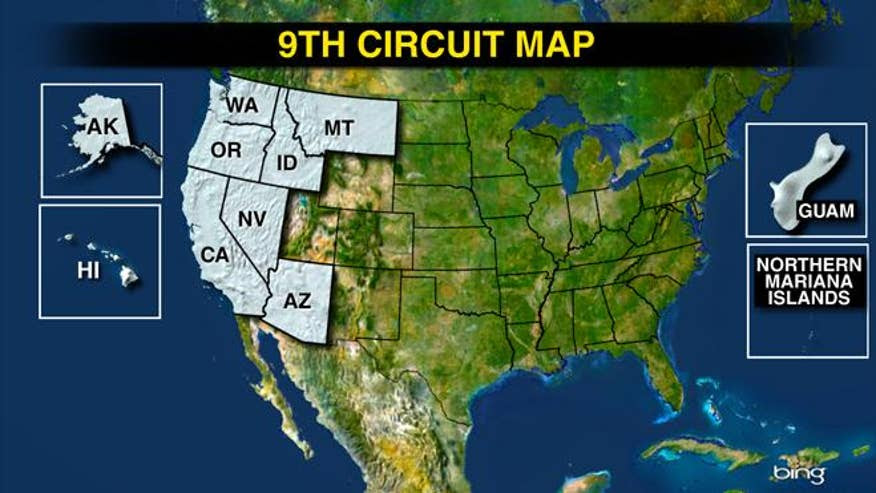 As judges on the 9th Circuit Court of Appeals weigh the legality of President Trump’s immigration executive order, a Republican push to split up the controversial court -- and shrink its clout -- is gaining steam on Capitol Hill.

They argue that the 9th is too big, too liberal and too slow resolving cases. If they succeed, only California, Oregon, Hawaii and two island districts would remain in the 9th's judicial fiefdom.

Right now, Flake said, the circuit is far too sprawling.

Violence, hypocrisy and clichés: The Democratic party in 2017

Looking back on last year, the buzzwords which Democrats chose to describe Republicans seem quite polite in the hindsight of 2017.  “Misogynist, racist, and deplorable” have now given way to the less diplomatic “fascist, Nazi and KKK,” as millions on the left now live in fear that their church lady neighbor may be “#literallyHitler.”

It is a strange and divisive new world we live in, and one that is only made more complicated by the fact that most of what seems to be Trump’s most controversial positions were just recently part of a moderate Democratic party platform.

Over the last decade, for example, building a border wall has gone from the rational stance of both Obama and Clinton to the Nazi dictum of the GOP.


In 2006, then-Senator Obama said in support of the Secure Fence Act:

More @ The Hill
Posted by Brock Townsend at Friday, February 10, 2017 No comments: Links to this post

A poll that was conducted between February 2-4 by left-leaning Politico shows that Americans support all of the Executive Orders that have been signed through February 4, including the Travel ban.

The national survey polled 2,070 registered voters with a +/- margin of 2 percent.


More @ The Gateway Pundit
Posted by Brock Townsend at Friday, February 10, 2017 2 comments: Links to this post The wording of the Constitution and the US Code is crystal clear.  Trump's immigration action is not even reviewable by a federal court, let alone subject to the judiciary or whatever opinion it may hold. This is an unwarranted and illegal intrusion and a presumption of one branch of government into the affairs of another.

(f) Suspension of entry or imposition of restrictions by President

Now how hard is that to understand?

Even a poor high school student would unambiguously understand this; but not simple and clear enough for liberal judges and in view of that, they have now made a mockery of their own privileged position in our society.

This is now a full blown constitutional crisis upon which may hinge whether this nation continues as a nation of laws or we devolve into a lawless nation of whims.

My advice to my liberal friends, be very very careful of what you wish for.

~ John
Posted by Brock Townsend at Friday, February 10, 2017 4 comments: Links to this post