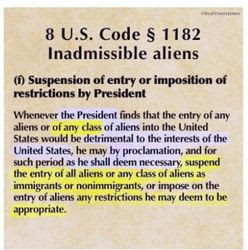 The wording of the Constitution and the US Code is crystal clear.  Trump's immigration action is not even reviewable by a federal court, let alone subject to the judiciary or whatever opinion it may hold. This is an unwarranted and illegal intrusion and a presumption of one branch of government into the affairs of another.

(f) Suspension of entry or imposition of restrictions by President

Now how hard is that to understand?

Even a poor high school student would unambiguously understand this; but not simple and clear enough for liberal judges and in view of that, they have now made a mockery of their own privileged position in our society.

This is now a full blown constitutional crisis upon which may hinge whether this nation continues as a nation of laws or we devolve into a lawless nation of whims.

My advice to my liberal friends, be very very careful of what you wish for.