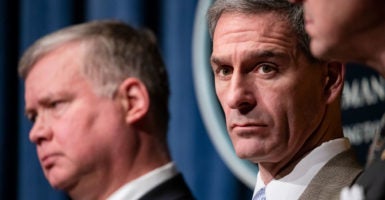 Defending the southern border is a key part of protecting the United States from the coronavirus, a top U.S. immigration official said Friday.

A border crisis could exacerbate a pandemic, said Ken Cuccinelli, acting deputy secretary of homeland security and a member of President Donald Trump’s coronavirus task force. But the disease doesn’t currently pose a major threat in the U.S., he added.

The Long March Toward Capitalism

We are beginning to see in the Democratic debates what a Democratic president would have in store for the United States. This is not a D vs R issue. It doesn't matter which political party offers up some socialist or communist program to find push back here on 12 Round, that is part of what we do, we fight for what we think is important. Capitalism is important, so it doesn't matter who proposes socialistic or communistic programs and Republicans have done it as much as Democrats. We are apolitical here in that we see no political party upholding and fighting for the things that we know work. Capitalism works. Hard work, works. Freedom works. Those are ideals that should be furthered, discussed, promoted, but America has slumped into a sort of quasi-socialist existence.

They’re At It Again: Media Claims Trump Called Coronavirus a ‘Hoax,’ But That’s Not What He Said

Last night at a rally in South Carolina, President Donald Trump called out the Democrats for politicizing the coronavirus, noting that so far the administration’s quick reaction has kept the cases of the virus low.

Trump quoted one of his people saying that the effort to politicize the virus is the new “hoax” effort following the failure of Russia and impeachment.

Here’s the video of what he said.