So Who Will Or Should Trump Pick For VP?

Outside of the expected neocon and RNC front operations, Ted Cruz's selection of Carly Fiorina as his would be VP pick is seen by most observers as either desperate pandering, naked desperation or an open abandonment of numerous of his previously stated positions and alleged principles. In reality it's probably all three along with a pay back for his having dumped half a million dollars into her campaign earlier. I strongly doubt it will much impress the voters of Indiana and likely cheeses off both Kasich and Rubio.

All that said it has also opened the floodgates of speculation on who Trump might select. Some of it so absurd as to be laughable. Most notably FOX News correspondent Carl Cameron's statement last night that Trump has to pick a woman because his ego is two big, he's to much of an alpha male to share the political spotlight with with another male. These so called experts have been out flanked and made to look like fools by Trump since the day he announced. I don't see that pattern changing any time soon.


Rumors are swirling that discontent among Republicans over a possible Trump nomination has some considering... http://fb.me/7SG3YOWRd
Posted by Brock Townsend at Thursday, April 28, 2016 2 comments:

Great Words by a Great Man 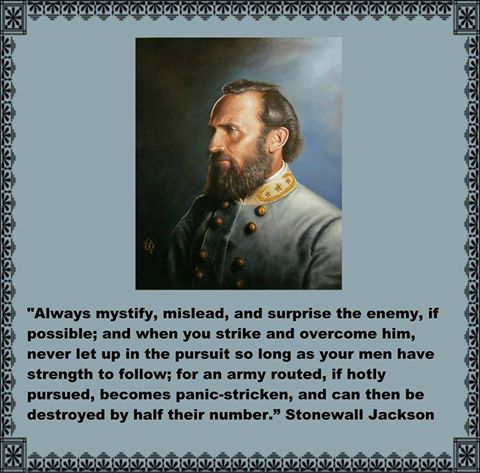 Posted by Brock Townsend at Thursday, April 28, 2016 No comments:

ABC News has updated its estimate of the current delegate totals in the Republican presidential primary, putting Donald Trump closer to the nomination than first thought after Tuesday night’s sweep of five states.

Reporter Ryan Struyk said on Twitter that the new numbers came from calls placed to every unbound delegate to gauge their support for Trump plus rivals Sen. Ted Cruz (R-TX) and John Kasich.

To many the abolition crusade recalls brave Northerners standing tall for the liberty of African slaves and the Rights of Man. Upon closer inspection the North was a region unfriendly to both the black man and abolitionists – the latter evident with the mob-murder of Elijah Lovejoy in antebellum Illinois. Daniel Webster saw these sectionalists for what they were, and what evil they might accomplish.Bernhard Thuersam, www.Circa1865.com   The Great American Political Divide

“The story of Daniel Webster and his great speech in 1850 has been told at some length because it is instructive. The historians who have set themselves to the task of upholding the idea that it was the aggressiveness of the South, during the controversy over slavery, and not that of the North, that brought on secession and war, could not make good their contention while Daniel Webster and his speech for “the Constitution and Union” stood in their way. They, therefore, wrote the great statesman “down and out” as they conceived.

But Webster and that speech still stand as beacon lights in the history of that crusade. The attack came from the North. The South, standing for its constitutional rights in the Union, was the conservative party. Southern leaders, it is true, were, during the controversy over slavery, often aggressive, but they were on the defensive—aggressive, just as Lee was when he made his campaign into Pennsylvania for the purpose of stopping the invasion of his own land.

Mr. Webster in his great speech for “the Constitution and the Union,” as became a great statesman, pleading for conciliation, measured the terms in which he condemned “personal liberty” laws and Abolitionism. But afterward, irritated by the attacks made upon him, he naturally spoke out more emphatically.

McMaster quotes several expressions from his speeches and letters replying to these assaults, and says: “His hatred of Abolitionists and Free-Soilers grew stronger and stronger. To him these men were a “band of sectionalists, narrow of mind, wanting in patriotism, without a spark of national feeling, and quite ready to see the Union go to pieces if heir own selfish ends were gained.” Such, if this was a fair summing up of his views, was Webster’s final opinion of those who were carrying on the great anti-slavery crusade.”

In light of the many complaints filed against the Arnold Law Firm, attorneys for Ammon Bundy, over their method of raising funds to pay for a legal defense against a government back by hundreds of attorneys and millions of dollars, perhaps there is another side to this story that needs to be looked at.
Shawna Cox had the wherewithal to begin recording the events, from the first stop to the murder of LaVoy Finicum.  In so doing, she recorded a moment of history that cannot be duplicated.

We all know that if you are in a position to have exclusive footage of an event of such magnitude, there is some value, to some news agencies, for exclusive use of such footage.  How often have you seen “Exclusive to XYZ News”, or something similar?  Well, it would not be “exclusive” if it were freely put out in the public domain, for the use of all.

I contacted a number of news agencies (in each instance, I agreed not to disclose the name of those willing to aid me in an effort to determine what value that particular footage might have.  It was predicated on the footage being exclusive and that its availability would have been shortly after the event, while it was still front-page news.

The results were that some would not have paid, as per their policy, for any such footage, to an estimate of that value being perhaps as much as $300,000.00.  Interestingly, the higher numbers came from the established, checkout stand, publications.  Those that rely on strange births, flying saucers, and other such attractions, intended to generate spontaneous purchases.  But, that does not change the color of the money that such footage might bring to the owner of the intellectual property.


More @ Outpost Of Freedom
Posted by Brock Townsend at Thursday, April 28, 2016 No comments:

Via panzerbar
Posted by Brock Townsend at Thursday, April 28, 2016 No comments: When Salisbury University police discovered that someone drew a stick figure hung by a noose on the school library’s whiteboard, they launched a hate crime investigation.

But after realizing it was two black students who drew the picture – which showed the hangman crying, included the N-word with an arrow pointed at the stick figure, as well as the message #whitepower –  they decided not to press criminal charges, The Delmarva Daily Times reports.

English Associate Professor James King told The SU Flyer that the school’s investigation identified the students responsible for the racist drawing, which was originally discovered April 10.

“I confirm two students have been identified,” he said, “and are both African American.”

LGBT Group Calls for Federal Ban of Single-Sex Bathrooms in ALL Public Schools!

Sex crimes revolving around men in women’s facilities are becoming commonplace as liberals continue to push their anti-traditional values campaign onto the rest of us, but this fact doesn’t seem to be slowing the liberal march towards cultural insanity.

In the wake of a federal appeals courts ruling that a school must allow a girl to use the boys’ bathroom, LGBT advocacy groups are now demanding that the Obama administration federally mandate the same for all K-12 public schools across the nation.

The Mask Comes Off: Putrefaction Most Foul