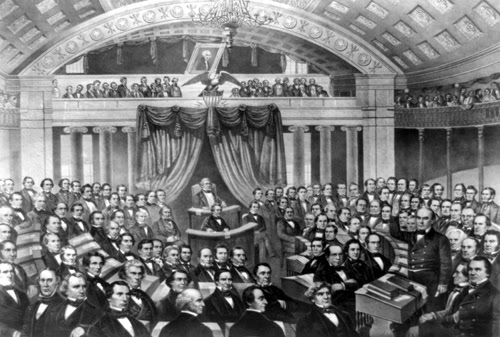 To many the abolition crusade recalls brave Northerners standing tall for the liberty of African slaves and the Rights of Man. Upon closer inspection the North was a region unfriendly to both the black man and abolitionists – the latter evident with the mob-murder of Elijah Lovejoy in antebellum Illinois. Daniel Webster saw these sectionalists for what they were, and what evil they might accomplish.Bernhard Thuersam, www.Circa1865.com   The Great American Political Divide

“The story of Daniel Webster and his great speech in 1850 has been told at some length because it is instructive. The historians who have set themselves to the task of upholding the idea that it was the aggressiveness of the South, during the controversy over slavery, and not that of the North, that brought on secession and war, could not make good their contention while Daniel Webster and his speech for “the Constitution and Union” stood in their way. They, therefore, wrote the great statesman “down and out” as they conceived.

But Webster and that speech still stand as beacon lights in the history of that crusade. The attack came from the North. The South, standing for its constitutional rights in the Union, was the conservative party. Southern leaders, it is true, were, during the controversy over slavery, often aggressive, but they were on the defensive—aggressive, just as Lee was when he made his campaign into Pennsylvania for the purpose of stopping the invasion of his own land.

Mr. Webster in his great speech for “the Constitution and the Union,” as became a great statesman, pleading for conciliation, measured the terms in which he condemned “personal liberty” laws and Abolitionism. But afterward, irritated by the attacks made upon him, he naturally spoke out more emphatically.

McMaster quotes several expressions from his speeches and letters replying to these assaults, and says: “His hatred of Abolitionists and Free-Soilers grew stronger and stronger. To him these men were a “band of sectionalists, narrow of mind, wanting in patriotism, without a spark of national feeling, and quite ready to see the Union go to pieces if heir own selfish ends were gained.” Such, if this was a fair summing up of his views, was Webster’s final opinion of those who were carrying on the great anti-slavery crusade.”