"If you want to know how profound your insights are, explain them to a tree and accept its response." 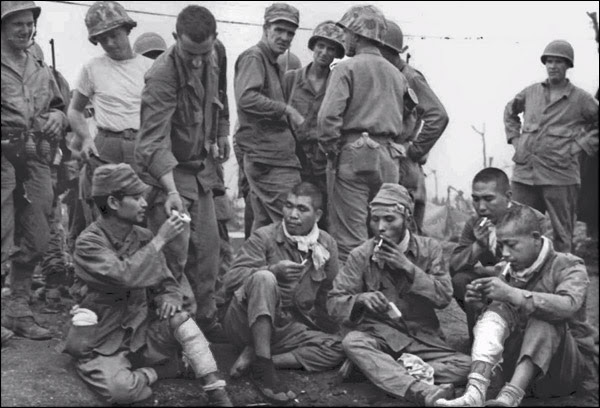 The best from Ol' Remus this week.
Posted by Brock Townsend at Monday, April 30, 2018 No comments:

Steve Hornady, the company’s president of manufacturing, announced on social media on Friday that the ammo maker will halt sales of their products to Cuomo’s state government or agencies in the Empire State. The move comes after an order directed by Cuomo earlier last month that cautioned banks, insurance companies and lenders against involvement with the National Rifle Association and similar organizations. Slamming the Governor’s move as one of the most “despicable acts ever perpetrated by any state,” Hornady closed the doors to the state.

“While it may not make a difference to New York, Hornady will not knowingly allow our ammunition to be sold to the Government of the State of NY or any NY agencies,” Hornady said. “Their actions are a blatant and disgusting abuse of office and we won’t be associated with a government that acts like that.”

Under The Radar: Mnuchin, Lighthizer and Kudlow Head To China – Korea, NAFTA and China Trade Deal all Merge…

The North Korean nuclear denuclearization agreement, and substantive peace treaty between North and South Korea, is part of the geopolitical trade negotiation with the U.S. (President Trump) and Beijing (Chairman Xi).

All three issues: •NAFTA, •China Trade Deal, and •North Korea all become part of the larger dynamic. These economic initiatives and Korean strategic peace initiatives are connected by President Trump’s unique use of economic leverage.

I have no idea how Team U.S.A. plans to frame a deal with China that simultaneously solves NAFTA (fatal flaw) and North Korea; however, there’s no doubt -due to the sequencing and timing- that this objective is well underway.


More @ The Last Refuge
Posted by Brock Townsend at Monday, April 30, 2018 No comments:

The old adage “history repeats itself” refers to striking similarities between past events and contemporary events. Consequently, historical accounts of past events not only help us understand what has happened but also better understand what is happening. This insight is badly needed at this time. Unfortunately, knowing the public has a weak grasp of history, some portrayals of past events involve propagandized history. This kind of history is currently besmirching our country’s heroes and history.

The vandalism of memorials to Confederates and former U.S. presidents taking place in the United States is not a new phenomenon. Throughout history there have been militants who wanted the social structure overturned even if it meant bypassing existing laws to do so. The usual argument was that the existing structure was oppressing certain groups. Efforts by zealots to expeditiously implement their version of “improvements” rarely succeeded and often made things worse before being phased out.


More @ The Abbeville Institute
Posted by Brock Townsend at Monday, April 30, 2018 No comments:

Thank you for taking the time to share your thoughts regarding the memo declassified by the House Permanent Select Committee on Intelligence (HPSCI).  I appreciate hearing from you.

As you know, on February 2, 2018, HPSCI released a memo outlining abuses that have occurred at the Department of Justice (DOJ) and Federal Bureau of Investigation (FBI) related to President Donald Trump’s presidential campaign.  It was revealed that Christopher Steele, who compiled a dossier detailing alleged collusion in the 2016 election, had clear financial and ideological motivations against Trump becoming president.  It also brought to light that the dossier was paid for by the Democrat National Committee and the Clinton campaign and that this specific information was not shared with the FISA Court.  These are details that could have easily led the Court to deny surveillance.  Even though the political origins were known to senior DOJ and FBI officials and it contained countless unverified claims, the Steele dossier formed an essential part in their application to the Foreign Intelligence Surveillance Court for authorization to surveil an individual associated with the Trump campaign.

I advocated strongly for this memo to be released.  This declassification is a major step towards providing transparency of the facts regarding the Steele dossier, and the American public has a right to know the information within the document.  It is my hope that this information will advance efforts to spur reform and accountability in our government, especially within our intelligence agencies, so that similar violations will not occur in any future administration, whether Democrat or Republican.  The abuses revealed from this memo are extremely significant, and must be taken seriously.  Furthermore, I believe the facts uncovered by the Committee provide substantial grounds for a special counsel to investigate the matter even further.  The power to appoint a special counsel is up to the Attorney General, and I have been disappointed that he has not taken that action.  However, a number of us in Congress will continue to press for this.

Thanks again for sharing your thoughts on this issue, and I hope you will feel free to contact me with any other questions or concerns.  In the meantime, please take a moment to visit my website: rouzer.house.gov and our official government Facebook page: facebook.com/RepRouzer.  There you will find information on a number of issues as well as have the opportunity to sign up for my weekly newsletter.
Posted by Brock Townsend at Monday, April 30, 2018 No comments:

Firearms Self Defense Questions ~ Is It Legal? I’ve written about this subject before, but the question keeps coming up in classes.
Inevitably someone asks:

Such questions are meaningless and mostly irrelevant!

When you are compelled to shoot immediately in order to save your life, you won’t be asking yourself such silly questions!

When confronting a deadly threat, and you have no other viable option, then shoot carefully and don’t miss!


What other answer can there be?

Understanding the Syrian civil war: Truths, lies and unknowns: Part 1 of a series

The United States has been critical to defeating ISIS in Syria and Iraq. Its bombing of Assad’s Syrian forces because of alleged use of toxic gases against civilians, however, is controversial. First of all, the allegations are not proven to the satisfaction of many former intelligence officers and informed observers and do not meet the common sense smell test. It is not in Assad’s interest to alienate the U.S. or the Western powers. He is winning the war. Why would he want to risk losing it by such actions?

A common misunderstanding is that the Syrian “Civil War” began seven years ago during the “Arab Spring” of 2011. A more accurate understanding is that it has been going on for close to 40 years at varying intensities. It has never been a populist rebellion against Bashar al-Assad, who succeeded his father as President of Syria in 2000, or his father, Hafez al-Assad, a former Syrian Air Force officer, who became President of Syria in a 1971 military coup. Although there are serious religious tensions within Syria between the Alawite Shia Muslim ruling minority (13 percent of the population) and the Sunni Arab Muslim majority (64 percent), the drive to overthrow the Assad regime came from outside Syria—from the Muslim Brotherhood in Egypt. 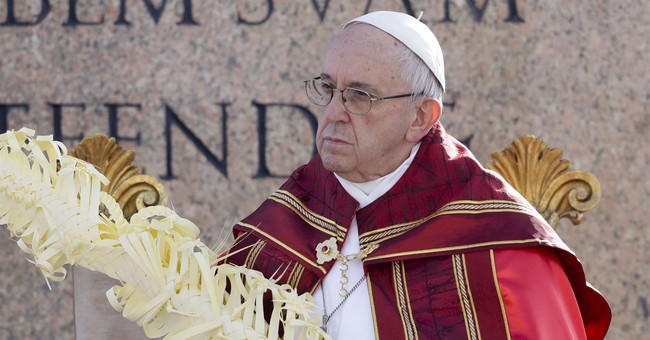 Today on Twitter, the head of the Roman Catholic Church called for a ban on all weapons. Pope Francis asserted that the mere presence of weapons makes us constantly live in fear of war.

Other Popes have acknowledged that weapons do indeed create a certain environment of fear. Church leaders have called for bans on certain types on weapons, such as nuclear weapons, but none have called for an outright ban on all weapons. The naiveté of this comment is pretty remarkable for several reasons.

He 'Destroys People': Gohmert Demands Mueller Resign in Report on Bureaucrat's 'Problematic' Past

Mueller told Gohmert his "facts are not all together (unintelligible)," prompting the lawmaker to challenge the director to tell him where he was lying.

Gohmert told Doocy Mueller was not being completely forthright in statements about visiting a Massachusetts mosque frequented by the murderous Tsarnaev brothers.

He said that the Trump-Russia probe is the latest example of Mueller intending to carry out personal vendettas.


Months of talk, rumor and gossip turned to action this weekend when a Confederate battle flag rose above Orange County.

Whether the flag will be allowed to remain may be determined by the Orange County Board of Commissioners. The board is set to hear the public's comments regarding proposed changes to sign rules May 15 at the Southern Human Services Center at 2501 Homestead Road in Chapel Hill.

Israeli Prime Minister Benjamin Netanyahu revealed new "dramatic" intelligence Monday which he claimed shows Iran is "brazenly lying" about its nuclear weapons program and shows the country is not complying with the vaunted nuclear deal it signed in 2015.

The information was obtained within the past 10 days, Israeli officials told Fox News. Netanyahu said the "half a ton" of files were moved to a "highly secret" location in Tehran after the deal was signed, and contained materials spread over 55,000 pages and 55,000 files on 183 CD's.

"These files conclusively prove that Iran is brazenly lying when it says it never had a nuclear weapons program," he said.

I Learned More at McDonald's Than at College & Off the Wall


Yesterday, I posted an article that dared to question the universal wisdom of pushing everyone toward a four-year degree. The article reached 3 million people, and not everyone was pleased...

Dawn Baker wrote, “Is it your intent to make those who choose college to feel ashamed, lazy and brainwashed? Our country's education system is under attack, and you seem to be supplying more ammunition to those attacking it......There's a reason many of these jobs pay well - they are truly HARD WORK - physically hard. Dangerous hard. Mentally hard. Feel free to send reps to the local unemployment office and brow beat them to send people to these jobs. Whether you mean to or not - your are sending a very bad message to those who want to destroy our higher education system.

It is time we as conservatives and Constitutionalists reframe the entire argument. Move the talking point from one of “virtue” in helping the poor illegals. Switch it to the “EVIL” of Human Trafficking.

Reframe those that support the “poor illegals,” into monsters selling humans as slaves and cheap, expendable labor. Everyone that blogs or writes should begin to change the way it is approached. “Rules for Radicals” works just as well for conservatives. Frame the argument in the terms of your opponent. Force them to begin to support Human Trafficking.