Via comment by Papa I want Germany to be GERMAN' Morrissey attacks Me..

Some Goodies From Ol' Remus 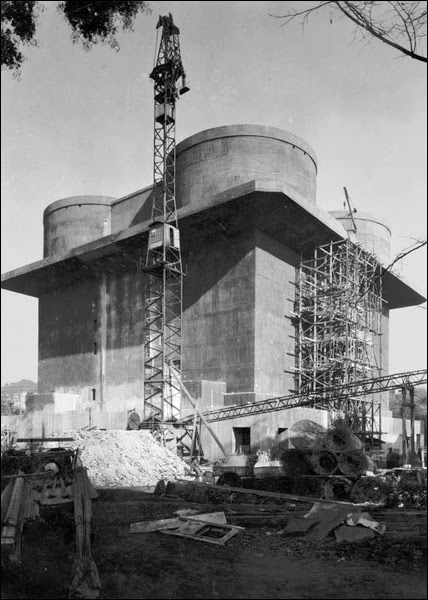 1943. Wilhelmsburg (?) Germany.
A flak tower under construction. This appears to be a Bauart Generation 2 Gun Tower, equipped with four twin 128mm Flak guns

and many smaller guns. It matches up with a photo of this one in Wilhelmsburg

. The famous Zoo Tower was a Generation 1.

G-Towers were accompanied by a smaller L-Tower used for command, armed with forty 20mm guns.

News24 - Rhodesians must 'come back and rebuild Zimbabwe', war vets say ... let's do it all over again

American Pravda, Unz Review - The puppet master behind President Boris Yeltsin had planned to transform Russia into a fake two-party state—one social-democratic and one neoconservative—in which heated public battles would be fought on divisive, symbolic issues, while behind the scenes both parties would actually be controlled by the same ruling elites. With the citizenry thus permanently divided and popular dissatisfaction safely channeled into meaningless dead-ends, Russia’s rulers could maintain unlimited wealth and power for themselves, with little threat to their reign. Perhaps we can guess where Berezovsky got his idea for such a clever political scheme.

Diversity, Taki's Magazine - Pilsen is a predominantly Mexican neighborhood in Chicago’s Lower West Side. The protesters are “demanding that non-Mexican owners here and across the street get out of Pilsen.” Viva la Raza! There’s your identity politics, leftists. This is the logical conclusion of the race-centered worldview that the left encourages nonwhites to embrace. These “progressive” geniuses thought they could unleash that beast on whites alone. They thought they could feed it, nurture it, grow it big and fat, and still control it. How’s that workin’ out?

The Only Underwater Submarine Battle Ever, National Interest - ... Running submerged on batteries, Launders slipped the Venturer behind the German submarine and began tailing it. He was waiting for U-864 to surface before launching his torpedoes, but thanks to its snorkel, U-864 could operate underwater for extended periods of time. The German submarine began zigzagging side to side, likely having detected the British sub. After three hours of pursuit, the Venturer was running short on battery and would soon have to surface itself. Launders decided he would simply have to attack U-864 while it remained submerged.
Posted by Brock Townsend at Tuesday, November 21, 2017 No comments:

According To The Prophecy I told you, barely more than a dozen hours ago, that someone would do a worldwide faceplant any minute.


The top US nuclear commander has said that if President Trump ordered a nuclear attack that he disagreed with he would refuse.

Air Force General John Hyten on Saturday told an audience at the Halifax International Security Forum in Nova Scotia that he's thought a lot about what he will do if Trump orders a strike he considers illegal.

'I think some people think we're stupid,' Hyten said, responding to a question about the scenario, according to CBS News. He is the commander of the US Strategic Command, or STRATCOM.

'We're not stupid people. We think about these things a lot. When you have this responsibility, how do you not think about it?'

Hyten said though that if the 'illegal' command did come, they would go through a process to find a better solution.

I'm not being insensitive here: I know picking on the US Air Farce, always an honorable alternative to military service, is like kicking the retarded kids. (But it feels so right!) So maybe those of you with influence in that organization could ask your leaders managers to stop bending over with big red and white targets on their asses, and "Kick Me" signs on their yellow-striped backs.

So for the benefit of all concerned, the following.

The revelation could be a breakthrough for House Republicans, who are exploring whether Fusion GPS used the dossier, which was later criticized for having inaccurate information on Trump, to feed anti-Trump stories to the press during and after the presidential campaign. The three journalists who were paid by Fusion GPS are known to have reported on "Russia issues relevant to [the committee's] investigation," the House Intelligence Committee said in a court filing.

But the recipients' names, the amounts, and purposes of those payments were either redacted from the documents that Fusion GPS filed to the U.S. District Court for the District of Columbia or were not disclosed.

The Department of Justice on Tuesday filed lawsuits to revoke the U.S. citizenship of five immigrants who pleaded guilty to sexually abusing minors in incidents determined to have taken place before they became naturalized, Fox News has learned.


These individuals, according to the Justice Department, “unlawfully procured their U.S. citizenship by concealing sexual abuse of minor victims during the naturalization process.”

“Committing fraud in any immigration matter undermines the integrity of our immigration system, and is a betrayal of the American people’s generosity,” Attorney General Jeff Sessions said in a statement. “It is especially appalling when it also involves the sexual abuse of children.”

The poll from WT&S Consulting of 11,641 likely voters conducted from November 18 to November 20, with a margin of error of 1.2 percent, has Moore at 46.4 percent—towering six points over Jones, who is stuck down at 40.5 percent—while 13.1 percent are undecided. 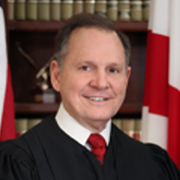 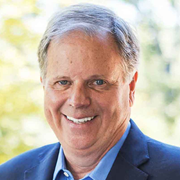 Bill Clinton is facing NEW accusations of sexual assault by four women while the former president was working with a billionaire playboy and flying on his private jet nicknamed Air F**k One, claims Clinton author 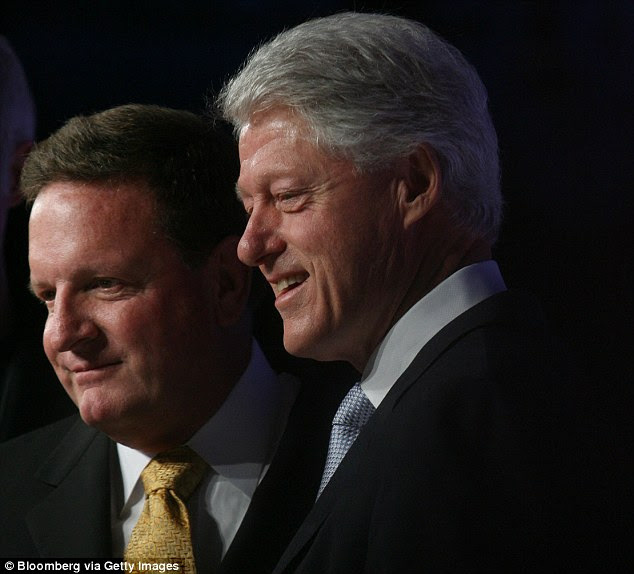 Edward Klein is the former editor in chief of the New York Times Magazine and the author of numerous bestsellers including his fourth book on the Clintons, Guilty as Sin, in 2016. His latest book is All Out War: The Plot to Destroy Trump was released on October 30, 2017.

Bill Clinton is facing explosive new charges of sexual assault from four women, according to highly placed Democratic Party sources and an official who served in both the Clinton and Obama administrations.

The current accusations against the 71-year-old former president — whose past is littered with charges of sexual misconduct — stem from the period after he left the White House in 2001, say the sources.
Attorneys representing the women, who are coordinating their efforts, have notified Clinton they are preparing to file four separate lawsuits against him.

Prager U Video: The Key To Unhappines - A warning about feeling entitled.

The Justice Department late Monday countered that cities, counties, and states do not have the ability to flout federal law and continue receiving federal money without any repercussions.


The evidence is clear that if you want to live in a well-run state, you’re better off moving to a red one
A study by the non-profit group Truth in Accounting looked at the public financing and debt burdens of all fifty states, which have a total of $1.5 trillion in long-term debt. In blue states, there is an average of $22,214 in unfunded debt. In red states, that taxpayer burden is only $1,473.

Every day, roughly 1,000 people move from blue states to red states on net balance. That’s good news for red states. In 2013, Florida gained $8.2 billion in adjusted gross income from out-of-staters. Texas gained $5.9 billion in one year. And given the more business-friendly environment in red states, they tend to outperform their liberal counterparts in both population and job growth.

If you want a more extreme example, look no further than the most liberal state in the nation: California.

This Is Good :) Far-leftist teacher goes off on student, claims to know more than the dictionary

The U.S. government considered manufacturing or obtaining Soviet aircraft in order to launch an attack on American or friendly bases that could then provide an excuse for war, according to newly released documents.

The documents are part of an October release of thousands of formerly classified files related to the assassination of John F. Kennedy. It describes a March 22, 1962 meeting that discussed “the question raised by the attorney general on the possibility of U.S. manufacture or acquisition of Soviet aircraft.”


More @ The Daily Caller
Posted by Brock Townsend at Tuesday, November 21, 2017 No comments:

"The complaint alleges racial discrimination against Asian-Americans in a university's admissions policy and practices.

The U.S. Department of Justice has opened an investigation into the use of race in Harvard University’s admissions practices and has accused the university of failing to cooperate with the probe, according to documents reviewed by The Wall Street Journal.

The Justice Department is investigating complaints that formed the basis of a federal civil lawsuit filed in 2014 in Boston, according to the documents. That suit alleges Harvard intentionally discriminates against Asian-Americans by limiting the number of Asian students... 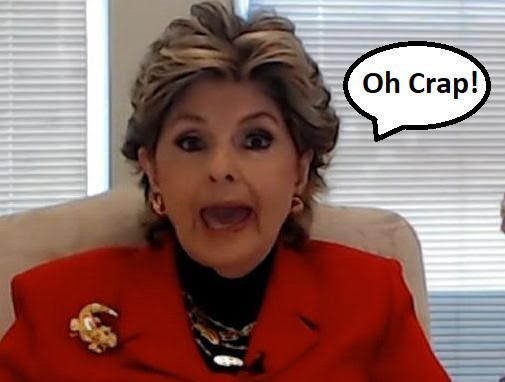 The Moore campaign published a report on Monday that shows the accusers, Gloria Allred and Beverly Nelson, were not telling the truth on the accusations against Judge Moore.

Gloria Allred was lying and so was the national media.

1.) The Olde Hickory House required employees to be at least 16.  Beverly Nelson claims she was 15 when she started.
2.) The restaurant’s dumpsters were on the side of the building and not in back as Nelson claimed.
3.) A former employee says the restaurant NEVER closed at 11 PM as Nelson claimed and at midnight on most nights.
4.) Customers at the counter were served by the bartender or cook and not by any waitress.
5.) The witnesses claim they have shared this information with several news outlets but they have refused to report the truth!


More @ The Gateway Pundit
Posted by Brock Townsend at Tuesday, November 21, 2017 No comments: 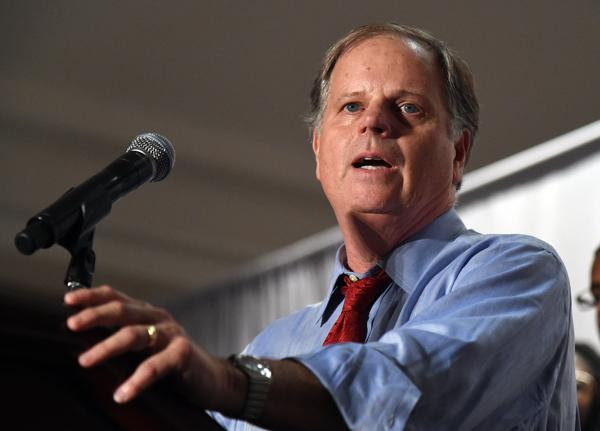 A woman who sued her university in 2001 over sexual abuse she allegedly suffered as a 15-year-old said Democratic U.S. Senate candidate Doug Jones questioned the timing and motivation of her accusations while defending employees of the University of Alabama at Birmingham in a $40 million lawsuit.

Brittany Benefield said she has been thinking about the case a lot in recent days as allegations surfaced that Jones' opponent, Roy Moore, engaged in inappropriate relationships with teen girls during his early 30s. Jones has said he finds Moore's accusers credible.

"I find it to be the height of hypocrisy that he sets his campaign to be on the moral high ground against Roy Moore," said Benefield.

Via comment by Papa on I want Germany to be GERMAN' Morrissey attacks Me...

The Supreme Court is giving the state of Hawaii until next Tuesday to respond to the Trump administration’s request that the court allow the full version of President Trump’s travel ban to take effect.

The court’s Public Information Office said a response has been requested and is due by Tuesday, Nov. 28 by 12 p.m.

A three-judge panel on the U.S. Court of Appeals for the Ninth Circuit ruled last week the administration could bar the entry of people from  Iran, Libya, Syria, Yemen, Somalia, and Chad, but only if they lack a connection to the U.S.


More @ The Hill
Posted by Brock Townsend at Tuesday, November 21, 2017 No comments: