How the Shutdown Shows Us Exactly Where to Start Cutting Government

Problem: Do you have any idea how many areas of your life involve the government?Now all these areas, that you didn’t even know the government was involved in, are affected by the shutdown!

Mainstream solution: Re-open government, and continue to leave all these sectors vulnerable to the incompetence and maliciousness of government.

Actual solution: GET THE GOVERNMENT THE HELL OUT OF THE ECONOMY!

Over a month of the “shutdown” and now they have agreed to reopen temporarily. Oh boy, that means we get all the terrible government we pay for back in our lives.

Until February 15th at least.

Then government workers can go back to the food bank lines or–gasp–find private sector jobs!


More @ The Daily Bell
Posted by Brock Townsend at Saturday, January 26, 2019 No comments:

Yet another selective prosecution has been designed to “get” the president, or at least another one of his friends.

In 2016, Roger Stone, a volunteer in sometimes-contact with Steve Bannon of the Trump presidential campaign, wanted to know what was going on with WikiLeaks and how it might help Donald Trump.

Christopher Steele, employed by the Hillary Clinton campaign, wanted to get dirt on Donald Trump to prevent him from becoming president. Both were trying to dig up fodder on their political opponent. One stands indicted today, after a guns-drawn raid by the FBI — and the other is safely out of reach of Congress in London.

A new report by a statistics professor at Washington University in St. Louis estimates that the 35-day partial government shutdown cost seven times more than the $5.7 billion that President Donald Trump requested for a border wall on the U.S.-Mexico border.

Posted by Brock Townsend at Saturday, January 26, 2019 No comments:


Having watched the 15 hour documentary by Ken Burns, we were disappointed, distressed, heart-broken, horrified, and outraged. Mr. Burns, a well-known producer of historical documentaries, has admitted in many interviews that before he started working on this project, knew very little about the Vietnam War, and what he did know was wrong. Burns has done nothing but rehash a one-sided version that the War was unnecessary, immoral, illegal, unwinnable, and a waste of lives and money. Ken Burns' in his "sole" discretion not only selectively choose people to be interviewed but also selectively "edited" the interviews, highlighting North Vietnam’s “heroic” actions.

South Vietnam’s struggle for freedom and independence from the North’s invasion, and the stories of the American soldiers who understood what was at stake for the Republic of Vietnam, were once again brushed aside.


Much, much more @ You Tube
Posted by Brock Townsend at Saturday, January 26, 2019 No comments:

HOAXED: EVERYTHING THEY TOLD YOU IS A LIE!

https://vimeo.com/ondemand/hoaxed Stefan Molyneux interviews Scooter Downey and Jon du Toit about the new Mike Cernovich production "Hoaxed" We all know the feeling of logging onto the Internet and reading fake news stories. The latest fake news story is that Joy Reid’s computer was hacked by time travelers. Fake news is a simulation, that is, an artificial construct of reality. What we know as “the news” simply isn’t true. Hoaxed will break through the media Simulation. Hoaxed is a crowd-funded documentary produced by Cerno Films. Cernovich’s last film about free speech included icons like Alan Dershowitz, Candace Owens, and Scott Adams. Hoaxed, if you can believe it, has an even greater cast. (Adams is in Hoaxed, too.) Hoaxed has two directors hard at work editing 100+ hours of interviews with 25 luminaries. Including: Anthony Scaramucci Cassie Jaye Alex Jones Gavin McInnes Jordan Peterson Lauren Southern Stefan Molyneux Scott Adams Mike Cernovich Tim Pool James O'Keefe Hawk Newsome Luke Rudowski
Posted by Brock Townsend at Saturday, January 26, 2019 No comments: 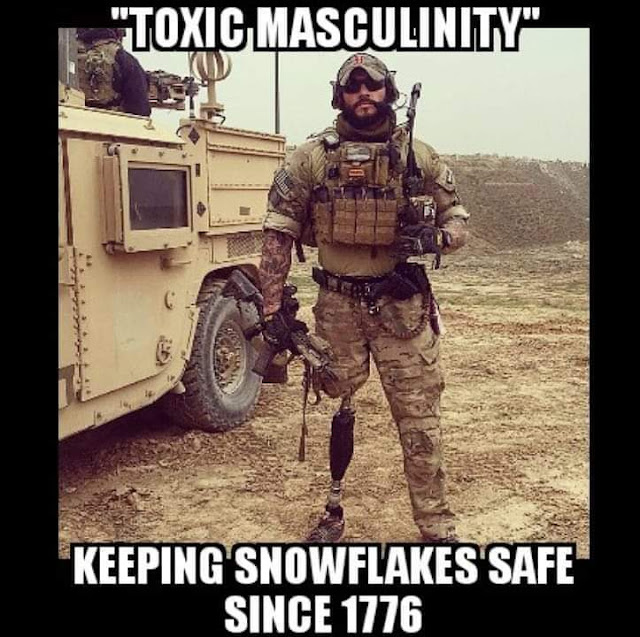 I could write a book on the subject... Trouble is, the people who know the truth don't need to read it and the others... will never comprehend... To get down and dirty..

"TOXIC MASCULINITY" can be summed up in one small yet very large word...,"FEAR!"

Toxic Masculinity is a construct by those who will never understand the concept of "True Masculinity" and because of their own "short comings" need to try to destroy what they cannot be!

I forget the web site the initials are "JWR"

This is the last part of the piece by Julia Gorin titled "The Anti-Gun Male"
(note there is more that precede's this ... easy to find...)

"....In short, he is a man begging for subjugation. He longs for it's promise of,"Equality in helplessness !" Because only when that strange, independent "Alpha Male" breed of male is helpless along with himself, will he feel adequate.... "Indeed!, his freedom lies in the other man's containment!".....

Just REMEMBER!
"MEN ARE FROM MARS....
WOMEN ARE FROM VENUS.....
ALL OTHER IMAGINED GENDER FORMS ARE FROM URANUS......"

China Is Losing The Trade War In Nearly Every Way 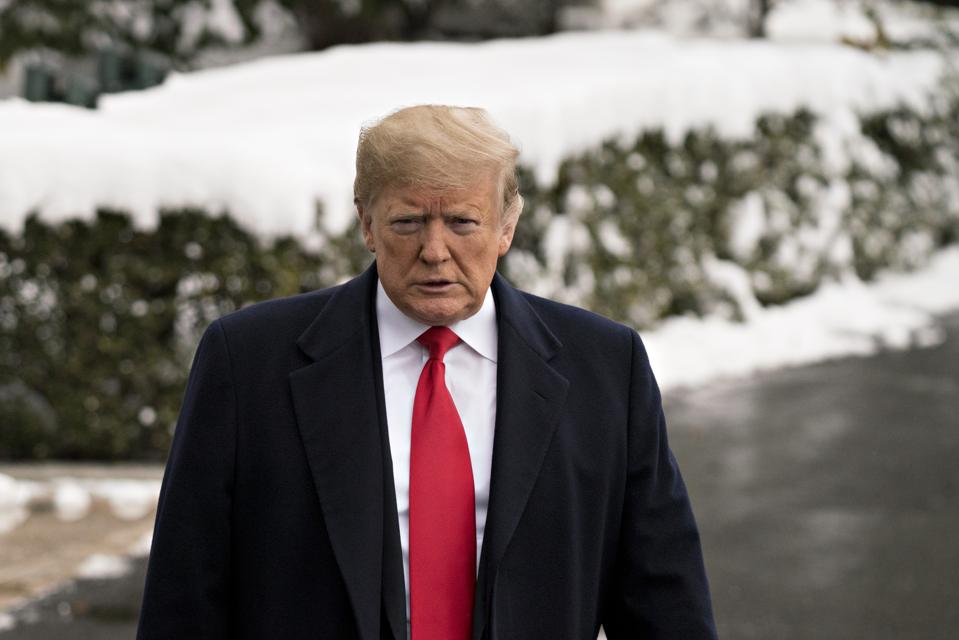 Perhaps China's biggest “win” on the trade front is Vietnam’s membership in the Comprehensive and Progressive Transpacific Partnership. For those who have forgotten, Vietnam is an authoritarian country run by Communist Party chief Nguyễn Phú Trọng. Vietnam has become an outpost of Chinese businesses, especially manufacturing and exporters looking for cheaper labor and less regulations. The trade deal is essentially the old TPP, which Trump killed upon entering the White House in 2017.


China is still the world’s No. 2 economy and is still the monster of emerging markets, but regardless of those bonafides, Xi Jinping’s country is losing the trade war in nearly every way imaginable.

The arrest of Huawei CFO Meng Wanzhou in Canada last month for breaking U.S. sanctions law, followed by the firing of Huawei sales executive Wang Weijing in Poland last week shows China can be a bad actor, exactly as Washington believes. The Poland story centers around spying allegations, where Wang allegedly sought trade secrets from the government. Huawei’s latest bad headlines show how China tech companies may have risen to prominence by copying foreign technologies in joint venture deals or through white-collar criminal actions such as intellectual property theft and corporate espionage. Huawei is one of China’s most important, private tech firms. It rivals Cisco Systems worldwide.

Thanks in part to Huawei, China is getting beat on the public relations front in the trade war.

"Died on the Field of Honor, Sir"
Thomas G. Jefferson
Posted by Brock Townsend at Saturday, January 26, 2019 No comments: 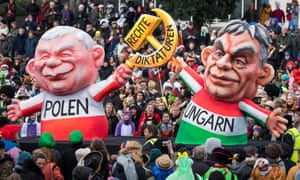 Liberal values in Europe face a challenge “not seen since the 1930s”, leading intellectuals from 21 countries have said, as the UK lurches towards Brexit and nationalists look set to make sweeping gains in EU parliamentary elections.

The group of 30 writers, historians and Nobel laureates declared in a manifesto published in several newspapers, including the Guardian, that Europe as an idea was “coming apart before our eyes”.

“We must now will Europe or perish beneath the waves of populism,” the document reads. “We must rediscover political voluntarism or accept that resentment, hatred and their cortege of sad passions will surround and submerge us.”

On Friday, Senator Lindsey Graham (R-SC) spoke with a Fox News reporter in his office at the Capitol.

During the exchange between Graham and the Fox News reporter, the senator made several critical points regarding the battle over border wall funding that’s taking place between President Trump and Democratic leadership.

First, Graham stated that this may be the best chance for DACA and TPS recipients, and that the ball is now in the Democrats’ court: