With all that took place on Friday in Paris, it made me stop in my tracks and shudder to think that same scenario could possibly have taken place on the streets of an American city.

While this writer and the majority of others across the world mourn the loss of innocent lives in this latest round of terrorist activity, at the same time I stop and think of my constitutional right to bear arms.

Yes, I know there are those – average citizens as well as within our government – who think the 2nd Amendment is outdated. They believe that particular Amendment was written at a time when the “terrorists” were the Red Coats from England, and at a time where American men wore white wigs and used their weapons to kill game in an effort to feed their families.

While we, as Americans, are now close allies with England, the threat of other terrorists is as real today as it was back in 1776. And, yes, there are gun-toting Americans who still use a weapon to hunt (minus the white wigs).

I, for one, will use a weapon – gun, knife, baseball bat, etc. – to protect myself, my family, and my property. It doesn’t matter if the threat comes from an ISIS operative or the guy down the road.
All of the recent terrorist activity, as well as those (to include several of my friends) backing the anti-gun movement, reminds me of a recent email I received regarding the right to bear arms. It goes like this:

My old Grandpa said to me, son, there comes a time in every man’s life when he stops bustin’ knuckles and starts bustin’ caps and usually it’s when he becomes too old to take a whoopin’.

The Chicagoan, 27, is facing assault and property damage charges after becoming unhinged when a Denny’s waitress explained that she was not allowed to share her $4 all-you-can-eat pancake special with her friends.

West was dining Friday at a Denny’s in Oak Lawn, a Chicago suburb, when a server explained that the unlimited pancake offer was good for a single diner.

This did not sit well with West, who was apparently was under the impression that her $4 bought everyone at the table and unending pancake bounty.

"There is no such thing as ISIS. ISIS is a creation of the US."


On Saturday, the day after the massacre in France which turned the streets of Paris into a warzone and left some 130 civilians dead, Syrian President Bashar al-Assad had a message for the West.

While condemning the attacks and branding the perpetrators “savages”, he was also quick to note that Syria has been dealing with this brand of terrorism for nearly five years straight. In what amounted to an “I told you so” moment, Assad also said the following: “We said, don't take what is happening in Syria lightly. Unfortunately, European officials did not listen.”

Man's obituary asks people not to vote to for Hillary Clinton

Richard Buckman of Arizona died this past weekend, but had an interesting request put into his obituary.

The 75-year-old is survived by several family members "who loved him dearly," the obituary says.

But the most notable line comes toward the end, when his last request is included.

"In lieu of flowers, please do not vote for Hillary."
Posted by Brock Townsend at Tuesday, November 17, 2015 2 comments:

Commie Kerry: ‘There Was … a Rationale’ For the Charlie Hebdo Terror Attack

In Tuesday remarks to the staff and their families at the U.S. Embassy in Paris, Secretary of State John Kerry suggested there was a “rationale” for the January Islamic terror attacks against the journalists/cartoonists at Charlie Hebdo magazine in Paris, France, that resulted in the murder of 12 people.


Loud chants of ‘Allahu Akbar’ filled the stadium in Muslim Istanbul at a friendly soccer match Tuesday evening between Greece and Turkey.

Attendees were asked to observe a moment of silence in honor of the victims of last Friday’s Islamic terror attacks in Paris.

Derisive whistles and boos also rang out during the attempt to honor the victims.


More @ The Gateway Pundit
Posted by Brock Townsend at Tuesday, November 17, 2015 No comments:

A member of The Islamic Center of Pflugerville arrived to find a torn up Quran covered in feces Monday morning, and police are investigating the incident as a hate crime.

At 6:18 a.m. Monday, police responded to the center along the 15800 block of Windermere Drive, where the officer found the Quran and feces in front of the entrance to the building.

The person who made the call told the officer he arrived at the center at about 5:55 a.m. for morning prayer when he saw the vandalism. The complainant said he was not aware of any threat toward the center.

Although no physical damage was made to the facility, clean up costs are estimated to be about $150.

Death Of The Globalist, Secular Utopia 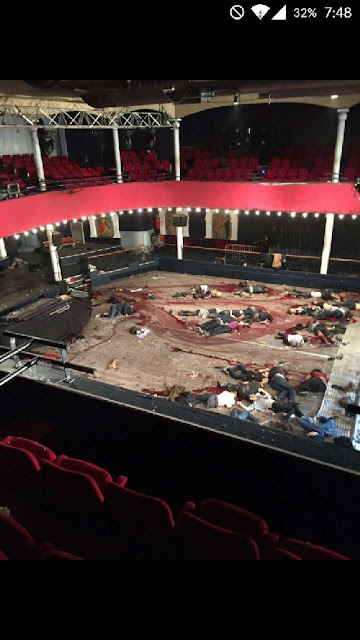 Take note of what one woman said about the attack.


Miss Wilson, 49, originally from New Orleans, also told how she witnessed the gunmen deliberately targeting concert-goers in wheelchairs. The gunmen hunted down disabled people who were sat in an area specially set aside for wheelchair users.

The mass killing of women and children, the most defenseless among us, in Iraq, isn’t an accident or incidental feature of militant Islam.  It’s who they are.  It’s what they do.  There is no mercy, there is no compassion, there is no love, there is no respect, there isn’t even honorable war.  There is only wretched evil, queued up straight from the pit of hell.

It’s Too Late to Save France

Terrorists attacked and killed more than 130 Parisians, but there are many ordinary Frenchmen who aren’t blaming the attackers and are pointing the finger at their own government.

But they aren’t angry, at least not at the perpetrators. “They’re stupid, but they aren’t evil,” their friend Sabrina, an administrative worker in one of the theaters in the 11th arrondissement, said. “They are victims of a system that excluded them from society, that’s why they felt this doesn’t belong to them and they could attack. There are those who live here in alienation, and we are all to blame for this alienation.”