The City Council of Kennesaw, Georgia has voted against allowing an Islamic religious group to rent space to open a local mosque. The vote was held as protestors outside City Hall waved signs saying “Ban Islam.” Although one council member voted to approve the application, four other members voted against the request. There was no debate about the vote.


Kennesaw’s Muslims had already agreed to a variety of limitations requested by the Kennesaw city attorney. They had accepted a limit of eighty worshipers at a time, forty parking spaces, and only a two-year lease. 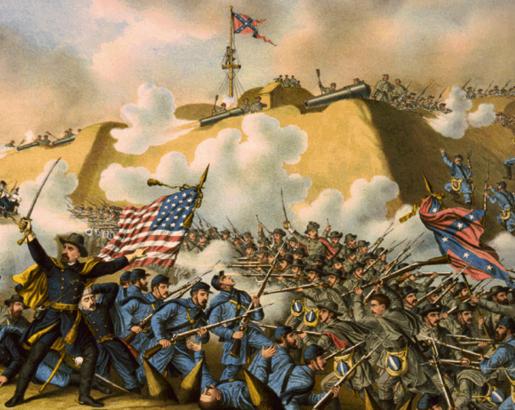 By late 1864, the anaconda strategy devised by Gen. Winfield Scott at the start of the war was reaching its lethal conclusion. The implacable, relentless naval blockade had crippled the South’s cotton economy, and drained the rebel army of its ability to wage battle.

Still, daring blockade runners helped maintain a supply of goods that were as vital as they were meager. Their preferred port had always been Wilmington, N.C., but after federal forces captured Mobile, Ala., in August 1864, it was also their last. With its railroad connections to Virginia, Wilmington was the last vein through which the South received goods from the outside world, and the last artery to its army. Now federal forces focused on severing that link.

Wilmington is 28 miles up the Cape Fear River from the Atlantic Ocean. One of several but by far the most formidable of the confederate positions guarding Wilmington was Fort Fisher, located right at the mouth of the river. Fort Fisher was built at the end of a narrow peninsula that is shaped like an inverted triangle; on the east side is the Atlantic, on the west, the river. Anything entering the river had to pass under the guns of what had come to be called the Gibraltar of the South.

Unintentionally, women voters have been responsible for the implementation of socialism, feminism and the destruction of the family.

At the dawn of the 20th century, Britain had the greatest empire the world had ever seen. It stretched from the boreal vastness of Canada to the ice floes of the South Pole, from the scorching deserts of Egypt to the steamy jungles of New Guinea.

In 1900, British king Edward VII ruled over a quarter of the world’s population. His navy was the largest, most modern, and most ruthlessly efficient fighting force on the planet. His was the empire on which the sun never set, the undisputed global leader in science, technology, and commerce.

And then, in 1918, the British Parliament made a historic mistake. It gave women the vote. In 1920 the United States followed. Women’s suffrage rapidly spread around the world. Nearly 100 years later, how’s that working out for us?

Former New York Mayor Rudolph Giuliani refused to back down Sunday from his comments that President Barack Obama has engaged in anti-police propaganda.

Giuliani appeared Sunday on CBS' "Face the Nation," where he was challenged by guest host Major Garrett.

Giuliani said on "Fox News Sunday" on December 21, "We’ve had four months of propaganda, starting with the president, that everybody should hate the police."

Odessa partisan detachment Vadym Papury provides independent agency network News-Front.info exclusive video, which depicted undermining freight train carrying software for the Ukrainian army. The incident is the first act of revenge for Vadim Papuru brutally murdered by the Nazis on May 2 in Odessa House of Trade Unions.
Posted by Brock Townsend at Sunday, December 28, 2014 No comments:

Was Santa good to your little athlete this year?

By athlete, of course, I mean video game player.

Were there lots of video games under the tree that could be the first step toward your son or daughter getting an athletic scholarship?

There was a time, long, long ago when boys and girls (mostly boys) would be thrilled to get a new football or football helmet, shoulder pads or a new basketball for Christmas and parents could dream of the day when they watch their kids playing in high school or college.

Or just be happy watching the kids hurrying outside to join their friends in the backyard to play with their new stuff.

Call it the nerdification or the wussification of America, but that’s becoming more rare every year.

Video game playing has been slowly replacing the actual playing of the games for a long time and the proof may be coming to a college near you.

Black Mob Violence at Christmas, All Over the Country

Via Jeff via The Feral Irishman


Holidays are a special time for practitioners and deniers of black mob violence. The Fourth of July, Memorial Day, Labor Day and of course New Year’s are among the most popular.

But not Christmas. Not usually. Not until this year: Black mob violence and resentment erupted across the country during the 72 hours before, during and after Christmas. And not the “carry signs and send out a press release” kind of political violence.

This year’s Yuletide racial violence was more spontaneous. More deadly. More old school.  Not connected to the recent political protests over Mike Brown, Eric Garner and fill in your favorite atrocity that racist police inflicted on black people For No Reason What So Ever.

@AZEALIABANKS I'm a white person who agrees with everything you're saying about history, and about racial reality today. What exactly (cont)
—
James DeWolf Perry (@JDeWPerry) December 26, 2014

As Executive Director of the Tracing Center, James DeWolf Perry has devoted a major portion of his life to educating Americans about the horrors of slavery. He was “nominated for an Emmy Award for his role as the principal historical consultant for our PBS documentary, Traces of the Trade: A Story from the Deep North.” He is, in other words, the perfect white liberal. You might think this would win him some points with hard-core leftist Azealia Banks, a singer/songwriter. Not exactly. Read her harangues below, then see how Mr. White Liberal responded.More @ Twitchy
Posted by Brock Townsend at Sunday, December 28, 2014 No comments: