“Right is where I am on the political spectrum. The only good liberal is one who has been thrown out of office or is up in Alaska somewhere trying to save the whales and isn’t around to get on my very last nerve.  In no particular order, then:

Welfare: I’m against it. I explain how to take care of people who are truly needy somewhere else in this book, but I can’t remember where.

Immigration: America first, with apologies to one of my heroes, Pat Buchanan.

Trade Barriers: Tell the Japs if they try to sell one more Toyota, we’re cranking up the Enola Gay again. We need to continue to trade with England, however, because I own a Jaguar and might need some parts.

Quotas: No, but I do wonder why there aren’t more black hockey players and so few Jewish country-music singers.

The Environment: Put a tent over Los Angeles so whatever it is they breathe out there doesn’t spread to the rest of the country. Close New Jersey. Protect the water. Mover the ozone layer over Chicago so the people who live there can warm up for once in their lives.

Capital Punishment: I’m for it. Not a single person ever executed for murder committed another one.

All-Female Golf Clubs: The holes would be too short for a long hitter like me, so go right ahead ladies.

I don’t own a single fur anything, however, and if animals were protected against becoming coats and hats, it would save men a lot of money because their wives wouldn’t ask for such expensive clothing. I’ve never owned anything from lizards, but I do remember a story from that great American Jerry Clower, the storyteller.

Jerry said he was on a talk show in California and was wearing his lizard boots. One of the show’s producers saw his boots and began to lecture him about the fact a little animal had to die for him to have those boots.

Jerry replied: “No ma’am. The lizard they used to make these boots had done been run over by a Greyhound bus and the bootmaker found him in the road.”

He also added, “Some people are educated way beyond their intelligence level,” which says a helluva lot.”

They don’t respect him and are now openly mocking the United States under the leadership of Barack Obama.

US forces hit an Afghan hospital after being fired on. At least 19 people were killed in the attack including several staff members for Doctors without Borders.


More@ The Gateway Pundit
Posted by Brock Townsend at Sunday, October 04, 2015 No comments: 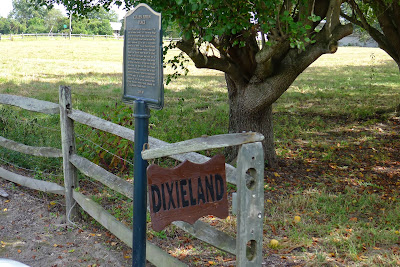 AAR attached. Outstanding week-end, even with the rain - I don't know how you're going to top it next time. 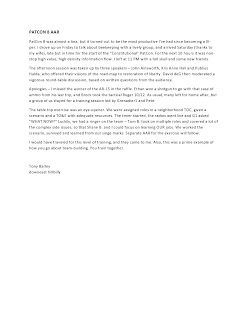 - Overall it was an excellent exercise. That was something that I haven't been a part of in a very long time (admittedly, my previous roles were only as radio operator/log writer and table "sculptor")

- I liked the scenario and the unexpected surprise in the middle.

- It was a very good first attempt (especially for the team that had never worked together before.)

- The only real negatives I experienced were all issues to be expected from an inexperienced team.

* Need to work on radio/communication procedures (using proper call signs; keeping radio silence; ie. don't call the recon team, wait for them to call you so that you don't accidentally jeopardize their position,)

* Need to establish code names/words prior to sending the recon team out (recon was asked about "location 3", but had no prior confirmation of where location 3 was.) [I will add pictures when I post the PATCON pictures. BT]

When President Obama spoke in reaction to the heinous October 1 attack on Umpqua Community College, he went beyond his usual calls for more gun control and suggested instead that America consider following the path blazed by Australia and Great Britain.

In the mid-1990s Australia and Great Britain both instituted what were virtually complete bans on firearm possession.

The Oregon Shooter is a 26-year-old black male.

Via Jonathan via Daily Timewaster

A team of archaeologists from the University of South Carolina have raised three Civil War cannons from the Pee Dee River in Mars Bluff, South Carolina. The cannons were the armament of the Confederate gunboat CSS Pee Dee which launched in January of 1865 and was deliberately scuttled by her crew just a month later when defeat seemed imminent. With the impending arrival of General William Tecumseh Sherman’s army fresh from putting Columbia to the torch, the crew jettisoned the ship’s guns into the river, dismantled the boat, set it on fire and set it adrift down the river.

The three cannons are two Brooke rifles, a 6.4-inch and a 7-inch, and a 9-inch Dahlgren smoothbore which was originally a Union weapon. The cannon was salvaged from the wreck of the USS Southfield after it was sunk by the formidable Confederate ironclad ram CSS Albemarle during the Battle of Plymouth on the Roanoke River in Plymouth, North Carolina, on April 19th, 1864. The Albermarle had been commissioned literally two days earlier and would cut a deadly swath through the Union Navy........

Via comment by Quartermain on Sweden: 'No Apartments, No Jobs, No Shopping Witho...

The SPLC then goes silent on the lawsuit and never mentions it again on their website. The SPLC does not want you to know how the case ended. Not only did the judge rule against them, they were ordered to reimburse Polk County $130k.

"Statistics Show White Supremacy is a Bigger Threat to the U.S. Than Radical Muslims."

Ponder that title for a moment and axe yourself if that is anywhere close to what you think the reality is in America today. Still, Yahoo, in front of God and man, presents the above is as an honest contribution to our national political debate.