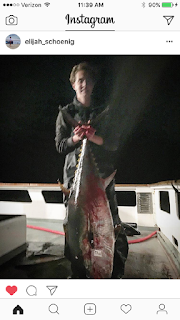 After two nights and 1 1/2 days in rough weather, a Bluefin! When Donald Trump shocked the world with an upset victory in the U.S. presidential election this month, much of Europe was aghast.

But in at least one critical sense, the result couldn’t have been more European: Across the continent, parties of the center-left that have dominated politics for decades — and that have given Europe its reputation for generous social welfare systems — now find themselves beaten, divided and directionless. Hillary Clinton and the Democrats are just the latest members of a beleaguered club.

In Germany and Britain, once-mighty center-left parties have been badly diminished, locked out of their nations’ top jobs for the foreseeable future. In Spain and Greece, they have been usurped by newer, more radical alternatives. And in France and Italy, they’re still governing — but their days in power may be numbered. The rout of the center-left has even extended deep into Scandinavia, perhaps the world’s premier bastion of social democracy.

A Mexican cement maker is ready to lend its services to U.S. President-elect Donald Trump to build the wall he wants to erect on the southern border of the United States to curb immigration.

“We can’t be choosy,” Enrique Escalante, Chief Executive Officer of Grupo Cementos de Chihuahua (GCC) said in an interview. “We’re an important producer in that area and we have to respect our clients on both sides of the border.”


More @ The Gateway Pundit
Posted by Brock Townsend at Thursday, November 24, 2016 No comments:

Antarctic Sea Ice Has Not Shrunk In 100 Years, Scott And Shackleton Logbooks Prove:Trump To Scrap NASA Climate Research In Crackdown On ‘Politicized Science’ Antarctic sea ice had barely changed from where it was 100 years ago, scientists have discovered, after pouring over the logbooks of great polar explorers such as Robert Falcon Scott and Ernest Shackleton. Experts were concerned that ice at the South Pole had declined significantly since the 1950s, which they feared was driven by man-made climate change.

But new analysis suggests that conditions are now virtually identical to when the Terra Nova and Endurance sailed to the continent in the early 1900s, indicating that declines are part of a natural cycle and not the result of global warming. Conservative students who want to avoid biased college professors now have access to a database that will inform them with the click of a button.

Higher Education Research Institute at UCLA concluded in 2014 that 60 percent of college professors identify as “liberal” or “far left.” Given that, the education watchdog aptly named ProfessorWatchlist.org created a tool that would help them make a prudent decision while signing up for classes. The team’s work is a project of the nonprofit organization Turning Point USA.

General David Petraeus, one of the United States' most prominent military officers, has indicated he would be willing to serve in President-elect Donald Trump's administration if asked.

Speaking to BBC Radio 4's Today programme, he said: "The only response can be: 'yes, Mr President'."

Gen Petraeus resigned as CIA director in 2012 following an extramarital affair with his biographer.
It later emerged he had shared classified material with her.

He served as a senior officer under Presidents Bush and Obama. He was the commander of US and Nato forces in Afghanistan, before retiring from the military to take the top position in the Central Intelligence Agency.

France on the Verge of Total Collapse

On August 3, French riot police dragged a priest and his congregation from the church of St Rita in Paris, prior to its scheduled demolition. Front National leader Marine Le Pen said in fury: "And what if they built parking lots in the place of Salafist mosques, and not of our churches?"

France is in turmoil. "Migrants" arriving from Africa and the Middle East sow disorder and insecurity in many cities. The huge slum commonly known as the "jungle of Calais" has just been dismantled, but other slums are being created each day. In eastern Paris, streets have been covered with corrugated sheets, oilcloth and disjointed boards. Violence is commonplace. France's 572 "no-go zones," officially defined as "sensitive urban areas", continue to grow, and police officers who approach them often suffer the consequences. Recently, a police car drove into an ambush and was torched while the police were prevented from getting out. If attacked, police officers are told by their superiors to flee rather than retaliate. Many police officers, angry at having to behave like cowards, have organized demonstrations. No terrorist attacks have taken place since the slaughter of a priest in Saint-Etienne-du-Rouvray on July 26, 2016, but intelligence services see that jihadists have returned from the Middle East and are ready to act, and that riots may break out anywhere, any time, on any pretext.

The Truth About The Civil War (sic)

Why We Don’t Elect Presidents via Popular Vote

They say a picture is worth a thousand words. I’ve written more than that combined here, here and here. But for anyone who is still on the fence on whether the Electoral College should be abandoned for the popular vote, maybe this from Michael Ramirez (Above) will help:

Trump: Making progress to keep a Carrier A/C plant to stay in U.S.

Donald J. Trump ✔ @realDonaldTrump
I am working hard, even on Thanksgiving, trying to get Carrier A.C. Company to stay in the U.S. (Indiana). MAKING PROGRESS - Will know soon!

Carrier announced earlier this year it would move the factory to Monterrey, Mexico, eliminating 1,400 jobs by 2019.

On the campaign trail, Trump threatened to call executives at the company and hit them with high tariffs on any furnaces and air conditioners imported from Mexico.


More @ The Hill
Posted by Brock Townsend at Thursday, November 24, 2016 No comments:


On Wednesday morning, November 23, 2016, after learning about President- elect Trump's nomination of Nikki Haley as Ambassador to the United Nations, I felt compelled to don the uniform of the Southern soldier, post his Colors with a sign around my neck at the front door of WLOS / WYMA  Channel 13 television station. The sign read: " United Nations Beware", Nikki Judas Haley Is Coming"!

Not one reporter would come out to interview me. One male employee would tell me that he had a great great grandfather who was a  Chaplain in a regiment from Georgia. However he had a problem with the Confederate Battle flag being place on the Capitol Dome in Columbia in 1961, because he saw it as a slap in the face of the 1961 Civil Rights Movement.

I told him that was pure poppy cot. And that this year marked the 100th anniversary of the War For Southern Independence. And furthermore, the Flag was placed on the Capitol grounds all over the South to mark the occasion. He tried to lecture me about the Battle Flag; a dead end road for him. After about 4 hours of marching back and forth along the walkway, posing for a conversation with visitors and employees of the station: I would furl my flag.

Shortly thereafter, I would make my way to downtown Asheville, North Carolina, and post the Colors at the front entrance on the public easement of the Asheville Citizen Times Newspaper Office. Here I would once again find myself answering many questions, and listening to many comments as well about how the Governor of South Carolina had become the most hated politician in the Southland; even as news outlets like Fox tried to make her out as some kind of heroine for her actions against the Southern Cross.

And just like myself. so many felt betrayal from Trump to place this woman in any position of the government. And seriously places in jeopardy no matter what he accomplishes in his first term as President, a chance to win the South again! Southerner's had listened to his rants about Honest Abe, covered our noses , and gave our votes. However, nothing can forgive climbing into bed with this traitor of the South who could have, and should have voiced the truth; " The Confederate Battle Flag had  nothing to do with what the misguided, and doped up Dylan Ruth's action of killing 9 wonderful people who invited him with arms opened wide into the House of God.

I know that it must have been mind boggling for the Yankees who after telling me how confused they were to see a Black man don in the Confederate soldiers uniform, and carrying his Colors; having to witness the huge display of love I was receiving from so many, to include the many staff members of the newspaper office who came out to greet me, not only by name, but everyone of them would embrace me, and express how good it was to see me.

Before they would leave, a dear friend, Mr.Gary Ledford would join the fray; telling my Yankee friends that I was a Living Legend, and a true hero to the people of the South. I told him not to give me a case of the Big Head. And after about 2 hours, I would furl my flag. No matter about Haley. It had been a good day in Dixie! God bless you!