If They Come for Your Guns, Do You Have a Responsibility to Fight?

I feel a tremendous responsibility to write this article though I am a little apprehensive. Thinking about the possibility of rising up against our own government is a frightening thing for many of us. I am not Johnny Rambo and I will be the first to admit that I do not want to die. The reason I feel compelled to write this, however, is simply because I don’t think the average American is equipped with the facts. I feel that a lot of American citizens feel like they have no choice but to surrender their guns if the government comes for them. I blame traditional media sources for this mass brainwash and I carry the responsibility of all small independent bloggers to tell the truth. So my focus today is to lay out your constitutional rights as an American, and let you decide what to do with those rights.

About a month ago I let the “democracy” word slip in a discussion with a fellow blogger. I know better. Americans have been conditioned to use this term. It’s not an accurate term and it never has been a correct term to describe our form of government. The truth is that the United States of America is a constitutional republic. This is similar to a democracy because our representatives are selected by democratic elections, but ultimately our representatives are required to work within the framework of our constitution. In other words, even if 90% of Americans want something that goes against our founding principles, they have no right to call for a violation of constitutional rights.

Tuscaroras And My Family

"The Koonce family of North Carolina originated in the Palatinate, the region along the upper Rhine River in Southern Germany, which supplied a large proportion of the Swiss and German colonists who founded the town of New Bern, NC in 1710 under the leadership of Baron Christopher De Graffenreid.

The founder of the family in North Carolina was Johann Christian Kunitzsli, (My sixth great grandfather) which was anglicized to John Koonce. John, his wife, and six children, survived the hardships of the voyage to America only to encounter worst misfortunes upon arrival in Virginia in April 1710."

One other bit of local trivia.  Perhaps New Bern’s most prominent landmark is the old concrete grain silo at what was New Bern Oil and Fertilizer.  It sits on the bank of the Neuse River on the north side of town and can be seen abovethe New Bern skyline from multiple locations and long distances.
At one time it was neighbored by a big saw mill, an ice plant and a coal yard on the south and the Maola Milk plantto the north.  All are out of business now.  The three to the south have been torn down and Maola is completely shut down but still there.  At the New Bern Oil Mill site only the 10 barrel grain elevator remains and sometime this week if not tomorrow it will come down.  They are busy cutting big holes in the bottom of it to weaken the structure so they can implode it.  I went by today to bid it farewell.  I used to work there.  It’s a shame to see all of New Bern’s industrial might now gone including Barbour Boat Works, New Bern Shipyard, Craven Foundry the Coca-Cola and Pepsi-Cola bottling plants  and other smaller outfits. America is truly dying before our eyes.  Half a mile of Neuse River waterfront that has been in industrial use since the early days of the Republic will now become houses and condo’s for Yankee carpet baggers I suppose.
Charlie
Posted by Brock Townsend at Tuesday, January 12, 2016 No comments:

Professionalism at it's best :)

Via Michael via NCR "My family monthly insurance premium took another $400.00 jump this year to over $2,000.00 per month. The good news is if I liked my plan, I can keep my plan. Well sort of. My deductible increased by 30% and my co-pays changed as well so I am paying a lot more for less. Blue Cross having learned from Obama told me that if I liked my plan I had to do nothing and it would be automatically renewed. Except under a new name and new benefits. I met with my local insurance broker and there was no better option available for us to take." 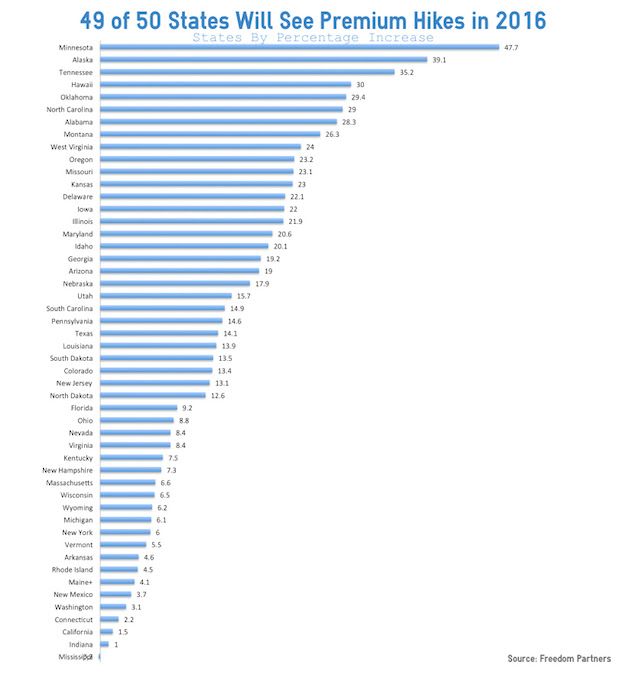 Forty-nine of 50 states will see premium hikes on the individual market in 2016, according to a tracker released by Freedom Partners, a Virginia-based non-profit.

Every state with the exception of Mississippi will see their health insurance premiums rise in 2016, and most states will see double-digit increases.


Posted by Brock Townsend at Tuesday, January 12, 2016 No comments:

‘We can’t arrest them’: German police officer speaks out on refugees

A German police officer told media that law enforcement cannot efficiently tackle crime among refugees without being accused of excessive violence or racism, while many dangerous incidents are played down or kept secret to maintain desirable statistics.
The federal police officer, referred to as Bernd K., has shared his experiences with Bild newspaper, having worked for six months at Munich train station and also in the “refugee hotspots” of Passau and Freilassing in Bavaria.

“At first, mostly families with children – who looked educated and spoke English – were coming here,” the officer told. “Meanwhile, 95 percent of refugees are now single men.”

Swedish police were criticised on Monday after admitting they failed to release information about alleged sexual assaults against women by young immigrants at a Stockholm summer music festival over the past two years.

There were 38 reports of rape and sexual assault filed after the We Are Sthlm festival, which uses the postal abbreviation for Stockholm, in 2014 and 2015, according to police.

The allegations were first made public in a report by the Swedish daily Dagens Nyheter, citing internal police memos, and the events appear to mirror similar incidents on New Year's Eve in the German city of Cologne.

David's reply to all religions are (equally?) violent

Qur’an Sura 8:12b, “… terrorize and behead those who believe in scriptures other than the Qur’an.”

Who is putting people in cages and drowning them?  Jews?  Christians?  Buddhists?  Hindus?  Shintos?

Who has courts that rule captive women can be raped?  Jews?  Christians?  Buddhists?  Hindus?  Shintos?

Who puts detonation cord around prisoners' necks and lights it off?
Jews?  Christians?  Buddhists?  Hindus?  Shintos?

Who has rules that prevent the execution of a virgin woman, so then has them forcibly married and raped so they can be properly put to death?
Jews?  Christians?  Buddhists?  Hindus?  Shintos?

Who has mobs that kill people based on a rumor someone said something bad about their prophet?  Jews?  Christians?  Buddhists?  Hindus? Shintos?
Posted by Brock Townsend at Tuesday, January 12, 2016 2 comments:

“Integrated” Muslim Migrants: Germans Are “Disgusting,” They Should All “Disappear”


A video shot in a German school shows “integrated” Muslim migrants speaking about how they find Germans “disgusting” and that the country would be better off if they all disappeared.

The wave of nonwhite refugee-criminal violence continues to spread across Germany, with two of the latest attacks being a mass sex attack in Leipzig and a vicious unprovoked assault in Chemnitz.

In the town of Chemnitz, local media reported, five nonwhite invaders were arrested after an unprovoked brutal assault on two 19-year-old Germans, one of whom suffered severe facial injuries, including having his front teeth smashed out.

Via comment by Central Alabamaian on Germany Just Screwed Europe

Not a tear is shed and it has only just begun.

On Saturday, some 1,700 people turned out for a PEGIDA rally in Cologne, where demonstrators protested Chancellor Angela Merkel’s open-door migrant policy in the wake of the sexual assaults that occurred on New Year’s Eve in the city center.

Ultimately, riot police were called in to disperse the crowds who held signs calling for the expulsion of “Rapefugees” and the ouster of Merkel.

Subsequently, reports indicated that gangs of “bikers, hooligans, and bouncers” used Facebook to coordinate a migrant “manhunt” that led directly to attacks on a group of Pakistanis in Cologne.

All of this points to the rapid disintegration of German society in the face of a refugee influx that numbers some 3,000 new asylum seekers per day.

On Monday, the backlash against Mid-East refugees continued as thousands gathered in Leipzig to protest for and against the city’s local PEGIDA chapter.

LEGIDA members took to the streets on Monday to commemorate the first anniversary of the founding of their chapter, as well as to protest against the recent New Year's Eve sexual assaults in Cologne.

"We are the people" "Resistance!" and "Deport them!" chanted the sign and flag-toting LEGIDA crowd. "Refugees not welcome!" read one sign, showing a silhouette of three men armed with knives pursuing a woman, while another declared "Islam = terror".

In another area of the city, riots broke out when around hundreds of soccer "hooligans" started rioting in the district of Connewitz. The neighborhood is considered to be the stronghold of the leftist scene in Leipzig.

Germany needs young people.  Its population is dwindling.  It doesn't have enough of them to support a rapidly aging German population.
However, if you dive into the details, it's clear this policy is very dangerous.

Germany needs young people.  Its population is dwindling.  It doesn't have enough of them to support a rapidly aging German population.
However, if you dive into the details, it's clear this policy is very dangerous.