Posted by Brock Townsend at Wednesday, August 01, 2012 No comments: 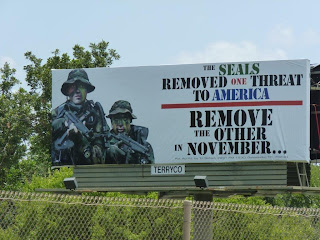 Posted by Brock Townsend at Wednesday, August 01, 2012 No comments:

If Two Lesbians Kill Another Lesbian, Is It A Hate Crime?

We have seen how the left tries to define alleged “hate crimes” and in particular they want to point to the free speech of Christians who decry a deviant lifestyle that is associated with homosexuality. But what happens when two lesbians kill another lesbian? Is that considered a hate crime by the left? In fact, would it even garner national attention?

Well such has occurred in Meadville, PN. Jade N. Olmstead, 18 and her new “lover” Ashley M. Barber brutally beat and strangled Olmstead’s former girlfriend, Brandy M. Stevens, 20, and then buried her alive. This is more than just a killing. It was torture.

Olmstead greeted Stevens and lured her into the woods near the home that she shared with Barber and Barber’s parents in Wayne Township, to see a crude fort that she and Ashley Barber were building. Barber was hiding there. At the fort, the two women began punching and kicking Stevens and stuffed a “Saw” cap into her mouth to stop her pleading for her life and screaming.

“They said they were freaking out from her screams,” Mallory said.

Stevens was knocked to the ground by the two women. Barber put a rope around her neck and strangled her while Olmstead alternately hit her in the head with a shovel and helped to choke her, Mallory said.

Barber also repeatedly pounded Stevens’ head against a stump and told police that a bruise on her own forehead came from head-butting Stevens’ besides.

“She was on the victim’s back with her knee in her spine, pulling her head back with the rope … and letting it hit the stump,” Mallory said.

The two women rolled Stevens into a shallow grave that they had prepared for her at the fort. When they saw that she was still breathing, they threw a large rock onto her face and poured water into her mouth and nose.

“She said that her worst fear was being buried alive,” Mallory said of Barber. “She was trying to kill her.”

Now, I ask you, why is Barack Obama not making this national news like he did the Trayvon Martin case? In fact, why is this not covered at all in the major media? ...........the Chick Fil-A in Hendersonville, NC
There was an enormous crowd with lines winding inside and going outside past the back end of the building and into the back parking lot. The Auto line extended onto U.S. 64, and traffic was backed up almost to I-26 on the west side. Parking space was scarce and spilled over into the parking lot of the shopping center almost to Wal-Mart. According to other people who had tried to eat there during the day, these crowded conditions began before 11 am. The expected wait, if you had the time, was as about two hours or slightly more. Yet people were smiling.

One Army Vietnam Veteran of the First Air Cavalry told me he was beginning to lose hope for his country, but he felt good now and looked forward to voting in November.