Interview with an old Dutch Waffen-SS veteran: "Have we learned anything from history? Yes, the victor is always right."

Posted by Brock Townsend at Saturday, January 27, 2018 2 comments: Links to this post 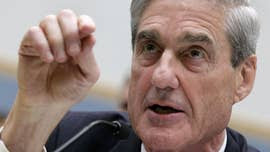 By agreeing to be interviewed by Mueller, Mr. President, you are agreeing to be questioned about exercising your executive authority in areas having nothing to do with any illegality or even collusion

Special Counsel Robert Mueller wants to interview President Trump. We know that is true because the areas of inquiry that Mueller is interested in have been leaked. But the questions Mueller is looking at are not about the issue the special counsel was supposed to examine: collusion with Russians to fix the 2016 presidential election.

Rather, the Washington Post reports that Mueller “is seeking to question President Trump in the coming weeks about his decisions to oust national security adviser Michael Flynn and FBI Director James B. Comey, according to two people familiar with his plans.”

The two acts, according to the Post, are related to “efforts by the president or others to hamper the special counsel’s probe.”

How can that be? Flynn had nothing to do with the special counsel’s probe. And firing the head of the FBI does not thwart what all the people under him are doing. So what is the alleged illegality here that could possibly “hamper” or obstruct the investigation?

Posted by Brock Townsend at Saturday, January 27, 2018 No comments: Links to this post 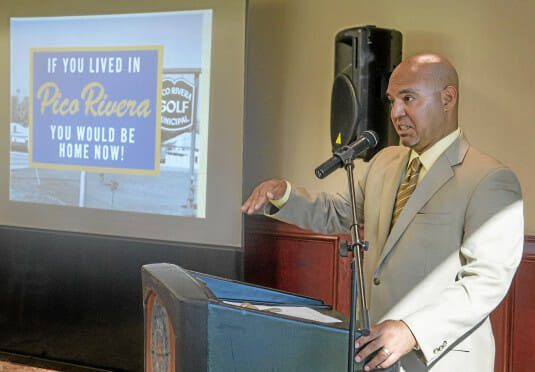 In a series of videos going viral over the weekend, High School teacher and Democrat Pico Rivera councilman Gregory Salcido told his Pico Rivera High School students this week that U.S. Marines are a “bunch of dumb s**ts” and the “lowest of the low.”
Salcido’s shocking rant was triggered after seeing a student wearing a U.S. Marines sweater.


More with videos @ The Gateway Pundit
Posted by Brock Townsend at Saturday, January 27, 2018 7 comments: Links to this post

Poe’s War of the Literati

Edgar Allan Poe secured a permanent place among world authors as father of the short story, creator of the detective story, and/poetic genius. While he has an international reputation, Poe consciously identified himself as a Southern writer.

Poe may not often come to mind as a Southern writer because he did not write about the South the way Simms or, later, Faulkner did. Philosophically opposed to the use of literature for didactic purposes, Poe did not make the South the object of his writing. Nonetheless, his stories resonate with the attitudes and interests one might expect from a young Virginia gentleman educated at the University of Virginia and West Point.

His sojourn in South Carolina had a subtle influence on the setting for many of his stories and poems. The sea, the marshes, the deep semi-tropical forests hung with Spanish moss, the forbidding swamps, and the narrow causeway approaches to isolated plantation manors formed the setting for such stories as “The Gold Bug,” “The Oblong Box,” “The Man that was Used Up,” “The Balloon Hoax,” “The Fall of the House of Usher,” and “Annabel Lee.” Poe also pioneered in the introduction of black characters in American fiction.


More @ The Abbeville Institute
Posted by Brock Townsend at Saturday, January 27, 2018 No comments: Links to this post


(The following is the speech that I delivered this Sunday at the South Carolina Tea Party Coalition Convention in Myrtle Beach. My appreciation to Joe Dugan and everyone involved in organizing it and making it a reality once again. And to Don Neuen and Donna Fiducia of Cowboy Logic Radio for the introduction. And to anyone and everyone still fighting the good fight.)

This is a civil war.

There aren’t any soldiers marching on Charleston… or Myrtle Beach. Nobody’s getting shot in the streets. Except in Chicago… and Baltimore, Detroit and Washington D.C.

But that’s not a civil war. It’s just what happens when Democrats run a city into the ground. And then they dig a hole in the ground so they can bury it even deeper.

If you look deep enough into that great big Democrat hole, you might even see where Jimmy Hoffa is buried.

But it’s not guns that make a civil war. It’s politics.

Guns are how a civil war ends. Politics is how it begins.

How do civil wars happen?


More @ Sultan Knish
Posted by Brock Townsend at Saturday, January 27, 2018 No comments: Links to this post

The political network overseen by industrialist billionaires Charles and David Koch on Saturday pledged to spend nearly $400 million on the midterm elections to defend Republican majorities in Congress and in state legislatures across the country.

The Koch network, meeting for its annual winter donor conference near Palm Springs, Calif., said the investment would also focus on promoting conservative policies and was equal to a 60 percent increase over what it spent in the 2016 presidential election. The campaign was set to include a $20 million expenditure to promote the Republican tax overhaul passed and signed into law late last year.

"We're all in," Tim Phillips, president of Americans for Prosperity, told reporters during a news conference to kick off the conference at the Renaissance Esmeralda Indian Wells Resort and Spa.


More @ Washington Examiner
Posted by Brock Townsend at Saturday, January 27, 2018 No comments: Links to this post

Posted by Brock Townsend at Saturday, January 27, 2018 No comments: Links to this post

Trump broke with Justice Dept, called for release of memo 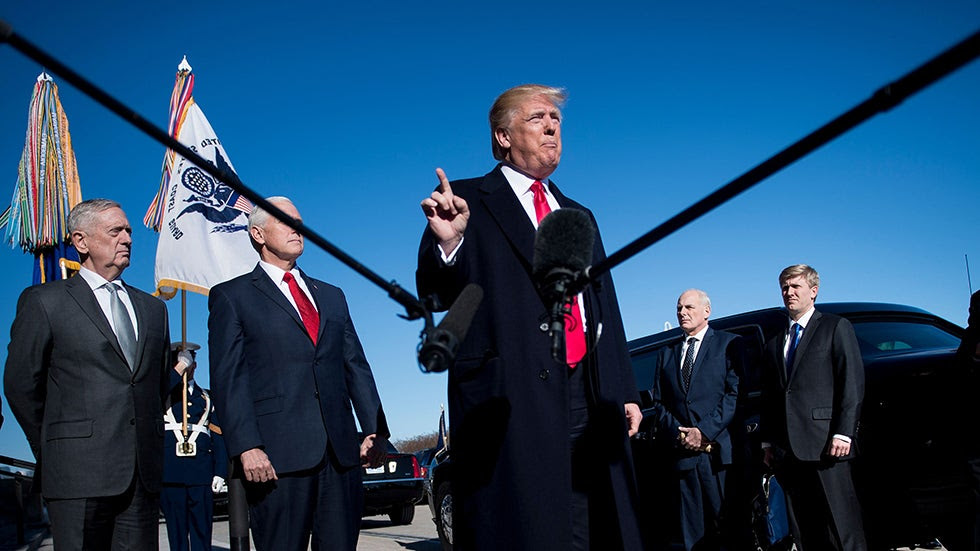 President Trump broke with top officials at the Justice Department and called for the release of a classified memo purported to list Foreign Intelligence Surveillance Act (FISA) abuses by the U.S. government, The Washington Post reported Saturday.

Despite warnings from top officials at the agency, Trump reportedly told Attorney General Jeff Sessions through Chief of Staff John Kelly that he wants to see the memo released, believing that it will shed light on the special counsel investigation.

Trump “is inclined to have that released just because it will shed light,” a senior administration official told the Post.


More @ The Hill
Posted by Brock Townsend at Saturday, January 27, 2018 No comments: Links to this post 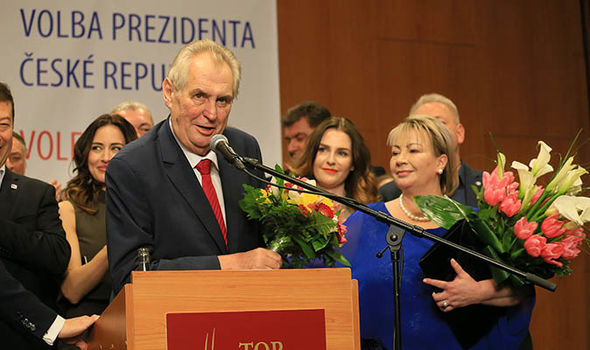 THE Czech election has been won by Milos Zeman leading to a nightmare for the EU over the President's populist policies and threats to hold a referendum on leaving the bloc.

With 99.35 percent of districts reporting, Mr Zeman won the run-off election round with 51.55 percent of the vote to 48.44 percent for his opponent Jiri Drahos.

It means Mr Zeman, aged 73, has secured a second term in charge of the nation, beating pro-EU academic Drahos.

And he did it on the back of a tough stance against immigration and courtship of closer ties with Russia and China.


More @ Express
Posted by Brock Townsend at Saturday, January 27, 2018 No comments: Links to this post


government lying when it claimed the text messages went missing

Sara Carter: Contents of  memo so “explosive,” that it could end Mueller’s Russia probe.


In his weekly social media update, Judicial Watch president Tom Fitton hinted “Deep State” efforts to destroy President Trump have reached a tipping point. “[It all seems to be coming to a head,” tweeted Fitton Saturday.


More @ The Gateway Pundit
Posted by Brock Townsend at Saturday, January 27, 2018 No comments: Links to this post

Clinton, Podesta And Others In Senate Crosshairs Over Dossier; Given Two Weeks To Respond

GOP Congressional investigators have written six letters to individuals or entities involved or thought to be involved in the funding, creation or distribution of the salacious and unverified "Trump-Russia dossier" believed to have been inappropriately used by the FBI, DOJ and Obama Administration in an effort to undermine Donald Trump as both a candidate and President of the United States.

Of Patriots and Ethnic Nationalists

I have been a long time reader and occasional commentator on a wide variety of right-wing web sites since the mid 1990s. The first, and for a long time the largest right-wing forums were run for, and populated by. self-described “patriots”.   These people self-identified with the US flag, the US Constitution, the US military, US history and the disappearing Mayberry America of a bygone era.

After a while, and in response to the continued misbehavior of the Federal government at the Waco and Ruby Ridge atrocities, a more radical subset of the patriot right came into existence, and created their own sites.  The “Three Percent” or “Threeper” sites were some of the first supporting this tendency.  The long-running Western Rifle Shooters Association (WRSA) has became,  over time,  home-base for the “armed patriot” right faction, in the same way that Free Republic has long been the home for the less militant patriots.