In the past few weeks two major interrelated events took place in these once United States of America that should serve as a warning for all Americans.  First, after the most contentious confirmation process for a Supreme Court justice in over 100 years, America has displayed its political-cultural division to the world and second, the ever-growing campaign of cultural genocide against all things Confederate continues unabated.


More @ The Abbeville Institute
Posted by Brock Townsend at Thursday, October 18, 2018 4 comments: Links to this post

As U.S. Polls Tighten the Signs All Point to Hillary

I checked today's poll and the R's are heading down.
In case you haven’t been paying attention, the Republicans are going to remain in control of both the House and the Senate in a couple of weeks.  Since their flawless victory over the Democrats in the fight to confirm Judge Brett Kavanaugh to the Supreme Court, the Republican base is more energized now than at any point since November 2016.

Gatez suspected that George Soros cash was being used, based on very clear-cut evidence of George Soros involvement in recent political matters including the Brett Kavanaugh confirmation process.
\

More with video @ Big League Politics
Posted by Brock Townsend at Thursday, October 18, 2018 No comments: Links to this post

A Hot Civil War Is the Plan

With only weeks to go before the election and the "blue wave" looking more like a swell, if anything, Democrats are desperate. Several party leaders have called for violence against Republicans. Others have pulled yard signs and encouraged people to harass Republican senators and representatives in public, to drive them from public view. Antifa, the military wing of the Democrat Party, has been more active and more violent; willing to assault anyone who does not immediately capitulate to their demands as was seen in Portland.

Where all of this ventures into the dangerous, civil war territory is that actions such as these have not only been condoned and encouraged by the mayors of the cities in which Antifa is active; cities that have rebuked the laws of the United States by claiming they are "sanctuaries"; cities that have refused to facilitate federal law enforcement; cities that have incited violence by refusing to arrest the perpetrators and instructing their police officers to stand down. They are trying desperately to get some patriot to the republic to take drastic action against these injustices. 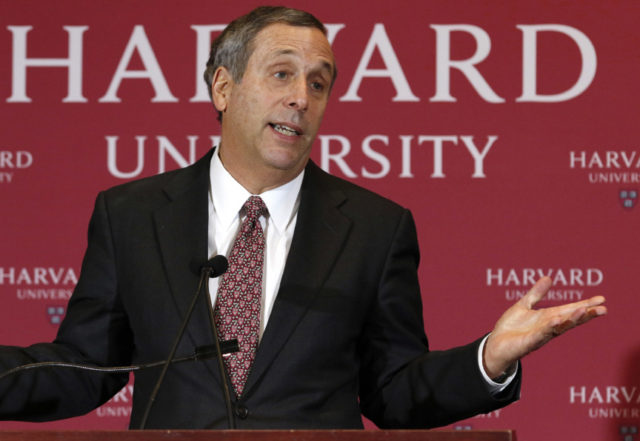 The trial over Harvard’s alleged discrimination against Asian-American applicants continued in a Boston courthouse on Wednesday, the third day in front of the judge.

According to a report by the Crimson, on Wednesday, Harvard Dean of Admissions William Fitzsimmons returned to the stand to answer questions about the university’s practice of accepting students with wealthy parents, some of which have attended Harvard themselves. The issue of “legacy” admissions has been controversial for quite some time and it often comes up alongside debates over affirmative action.

Fitzsimmons was asked about a series of emails in which the Harvard admission’s office seemed to “roll out the red carpet” for wealthy students.


More @ Breitbart
Posted by Brock Townsend at Thursday, October 18, 2018 No comments: Links to this post


“I think at this particular point, Rod Rosenstein’s priorities are misplaced. His unwillingness to come before Congress and allow us to conduct proper congressional oversight, along with the other information that we’ve learned over the last week or so, would indicate that Rosenstein has not displayed the candor of which would support one’s theory of actually believing that he has been open and honest in all regards," Meadows told reporters.

More @ The Hill
Posted by Brock Townsend at Thursday, October 18, 2018 3 comments: Links to this post

‘I’d rather be poor and master of my own fate’: Multimillionaire actor Michael Caine on Brexit 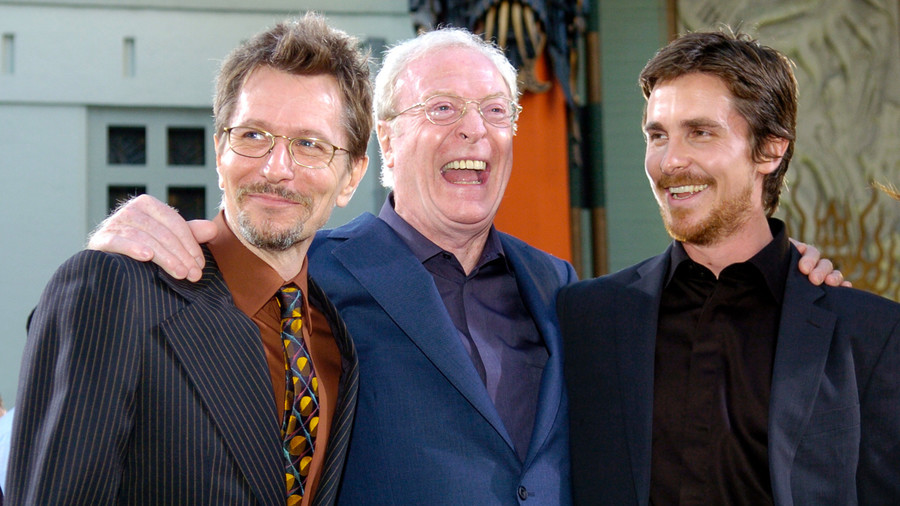 Multimillionaire actor Michael Caine has claimed he would rather be poor and in control of his own fate, than the current 'fascist’ alternative by which people he doesn’t know and no one has elected make him rich by running it.
The legendary British actor, who has starred in iconic films such as ‘The Italian Job’ and ‘The Dark Knight,’ has been a staunch supporter of the UK leaving the EU. He insists that any fears over a ‘no-deal’ Brexit are simply the result of scare tactics.

Judicial Watch announced today that in his opening remarks at a Friday, October 12 hearing, U.S. District Court Judge Royce C. Lamberth strongly criticized the U.S. Department of State, stating, “The information that I was provided was clearly false regarding the adequacy of the [Clinton email] search and… what we now know turned out to be the Secretary’s email system.”

Turning his attention to the Department of Justice, Judge Lamberth said that he was “dumbfounded” by the agency’s Inspector General report revealing that Cheryl Mills had been given immunity and was allowed to accompany former Secretary of State Hillary Clinton to her FBI interview:


I had myself found that Cheryl Mills had committed perjury and lied under oath in a published opinion I had issued in a Judicial Watch case where I found her unworthy of belief, and I was quite shocked to find out she had been given immunity in — by the Justice Department in the Hillary Clinton email case. So I did not know that until I read the IG report and learned that and that she had accompanied the Secretary to her interview.

27 Snapshots of Old Saigon in 1970 by Carl Nielsen 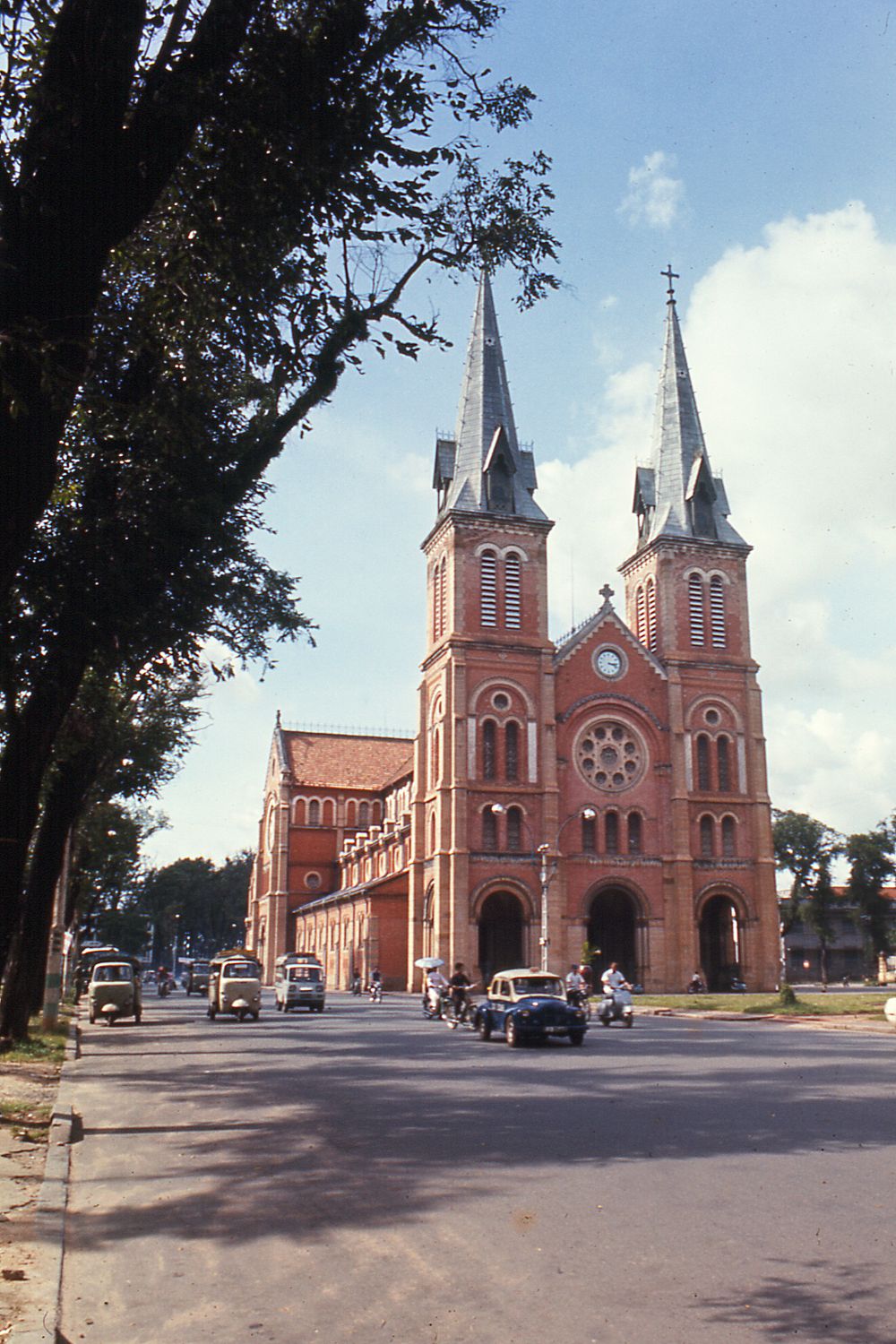 Named JFK Square until the commies took over.

Almost five decades ago, Saigon didn’t have much in terms of high-rise buildings; however, judging by the amount of people hanging about in public spaces, street life was as much a big part of metropolitan life as it is today.

This collection of photos, taken by American soldier Carl Nielsen, was created in 1970 during Nielsen’s stay in the metropolis teaching English in a military facility. “I was teaching English at a military language school. So [I] had some free time to observe the local culture, and act like a tourist,” he writes on a photo of himself at the Saigon Zoo.

During the course of his stay, Nielsen wandered around his neighborhood, visited some landmarks and took a few trips to the zoo to people-watch. He seemed to have taken an interest in local religious structures, as evidenced by a number of shots showcasing various Buddhist and Hindu temples in town.


More @ Saigoneer
Posted by Brock Townsend at Thursday, October 18, 2018 No comments: Links to this post

Trump awards Vietnam vet Medal of Honor. President Trump congratulates Canley after presenting him the Medal of Honor.
“President Trump’s promise to cut Obama-era regulations has gone into overdrive, with the slashing generating $33 billion in savings, far more than expected,” Paul Bedard reports for the Washington Examiner. “A new report from the White House budget office said that $23 billion in savings has occurred this year alone, with the total at $33 billion since the president took office.”

I find this fact, that Marine Le Pen is now being charged with releasing the findings of her own mandatory psych evaluation to the public, to be Soviet in its methodology.

This is one of those videos I would ask you all to please spread, and explain to people why this one is so important. Put it in the category of Geert Wilders being criminally charged for having an opposition view to immigration policy. Which is his exact job and responsibility as an opposition politician.

There are many examples of politicians being charged in Europe for criminal offences fro doing exactly what they are meant to be doing and elected to do. But the EU and French government treatment of Le Pen is beyond any flimsy excuse.
Posted by Brock Townsend at Thursday, October 18, 2018 No comments: Links to this post

President Trump on Wednesday said the U.S. has requested audio and video from Turkey related to the disappearance of journalist Jamal Khashoggi.

"We have asked for it, if it exists," Trump said in the Oval Office, later conceding it "probably does."

Trump said he expected to get a "full report" from Secretary of State Mike Pompeo when he returns to the U.S. from meetings with Saudi and Turkish officials.

"I want to find out what happened, where is the fault, and we will probably know that by the end of the week," Trump said.


More @ The Hill
Posted by Brock Townsend at Thursday, October 18, 2018 No comments: Links to this post 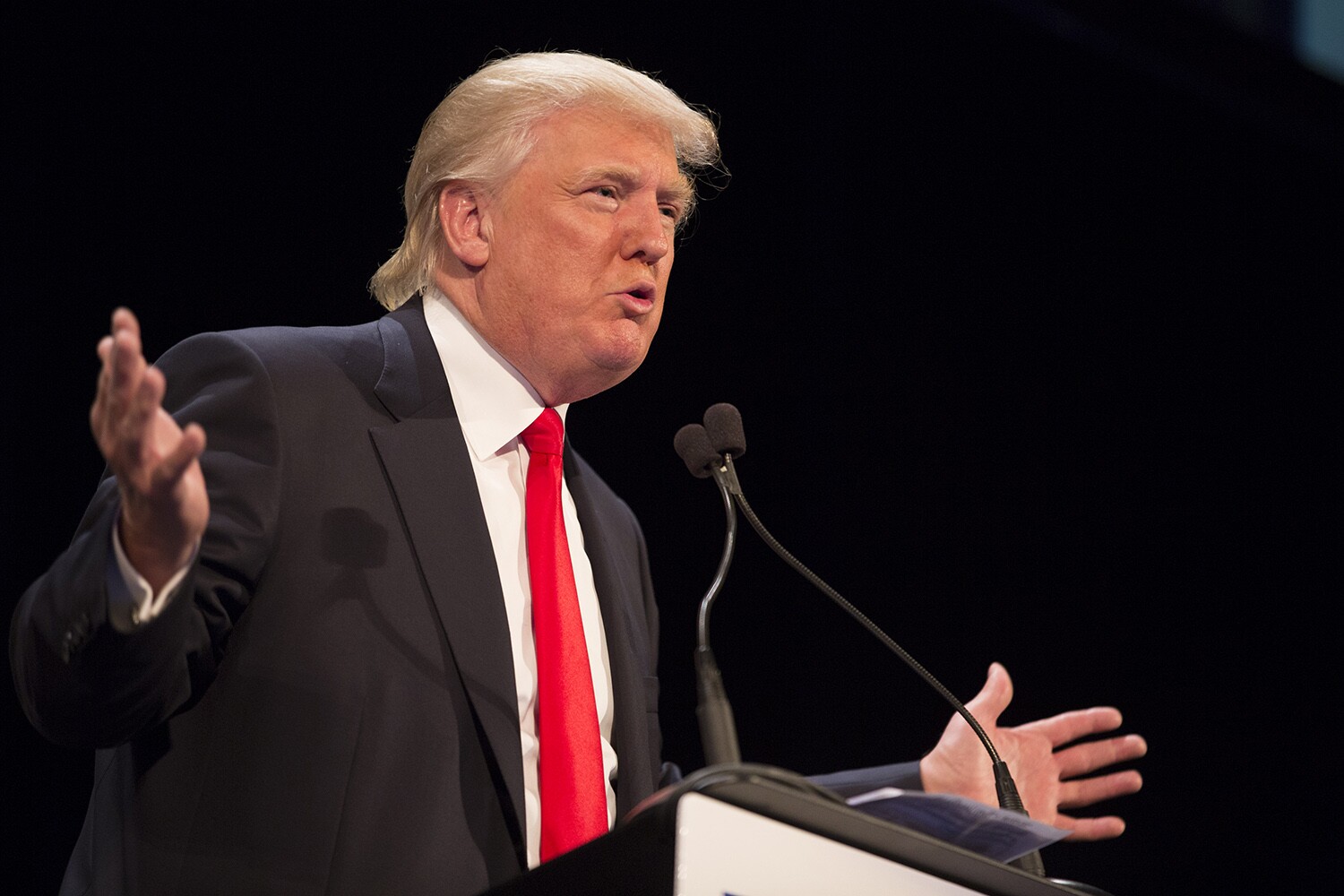 President Trump on Thursday warned that he may take military action to stop immigrants from crossing the southern border into the U.S. if Mexico does not take action to stop the "onslaught."

Trump in a series of early-morning tweets also blamed Democrats for the “assault on our country,” adding that illegal immigration is “far more important” to him than trade or the recently negotiated trade pact with Mexico and Canada.

And he railed against Guatemala, Honduras and El Salvador, saying they “have almost no control over their population.”

More @ The Hill
Posted by Brock Townsend at Thursday, October 18, 2018 13 comments: Links to this post

Professor calls for harassing Republicans at restaurants, sticking 'fingers in their salads' 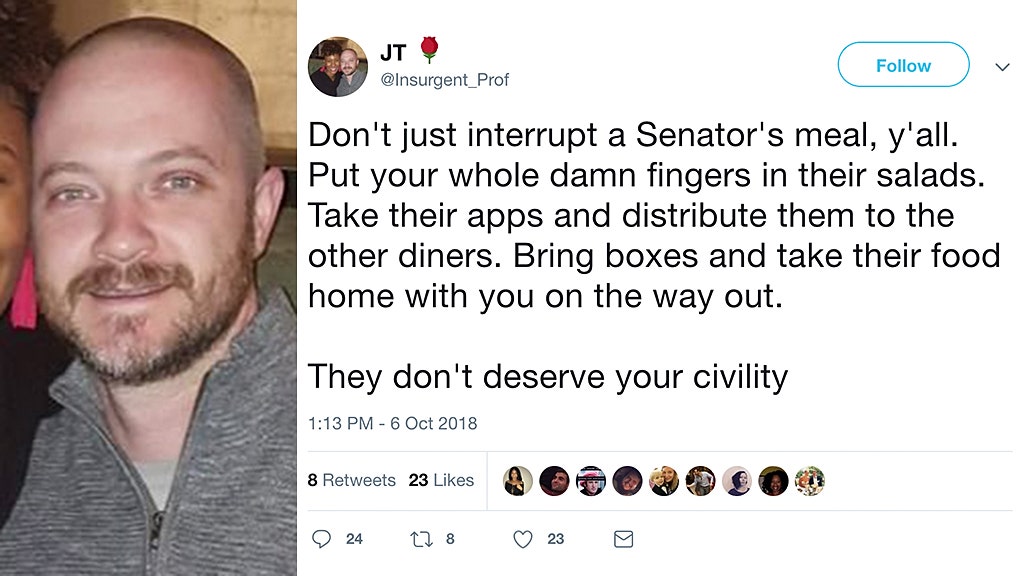 The University of Mississippi has condemned a tweet by a faculty member that called on activists to abandon civility and harass Republican senators in public.

“Don’t just interrupt a Senator’s meal, y’all,” James Thomas, an assistant professor of sociology, tweeted from his @Insurgent_Prof account on Oct. 6, the day Justice Brett M. Kavanaugh was sworn into the Supreme Court.

“Put your whole damn fingers in their salads,” he wrote. “Take their apps and distribute them to the other diners. Bring boxes and take their food home with you on the way out. They don’t deserve your civility.”


More @ The Washington Times
Posted by Brock Townsend at Thursday, October 18, 2018 2 comments: Links to this post