Abbeville Institute Summer School on Southern Identity Through Music:The Sounds of Appalachia and the Mississippi Delta

Hugh Glass: 'The Revenant' Protagonist Was Even More Badass In Real Life

Last Measure of an Exhausted Government 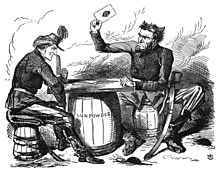 "Abe Lincoln's Last Card; Or, Rouge-et-Noir (Red and Black)"; Punch, Volume 43, October 18, 1862, p. 161.— a cartoon by the Englishman John Tenniel, after the London Times stated that Lincoln had played his "last card" in issuing the Proclamation.[87][88] Lincoln's hair is in points, suggesting horns. The cartoon was often reprinted in the Copperhead press.[89][90]

Rather than end the carnage that had already, by mid-1862, claimed the lives of thousands of Americans, Lincoln instead confiscated the property of those who sought liberty in a more perfect union, and advanced a plan to incite a race war as was done by emulating Virginia’s Royal Governor Dunmore who in November 1775 emancipated all slaves “who would repair to His Majesty’s banners.”

Lincoln’s measure freed no slaves: none under his control, and none in States where he had no control. It is important to note that Americans in the South had been freeing African slaves by deed and will since the end of the Revolution, which created a large population of freedmen. This large population would have grown without the war.
www.Circa1865.org   The Great American Political Divide

Last Measure of an Exhausted Government

“While [Lincoln] thought that more evil than good would be derived from the wholesale arming of Negroes, yet he was not unwilling that that [Northern] commanders arm, purely for defensive purposes, those slaves who came within Union lines. But the President had reached a decision on the correlated policy of emancipation with which it appears that his cabinet was not in accord.

They were surprised when he read to them the first draft of a proclamation warning the rebels of the penalties provided by the Confiscation Act . . . The Cabinet was somewhat “bewildered by the magnitude and boldness of this proposal.” Only two members of the cabinet concurred in the proposal.

Secretary [Salmon P.] Chase favored this plan of military emancipation, but would not approve the method of execution. [Montgomery] Blair, the Postmaster General, deprecated this policy on the grounds that it would cost the administration the fall elections.

Secretary [of State William] Seward approved it and yet questioned the expediency of its issue at that stage of the war, owing to the depression of the public mind and the repeated reversals for the Union armies. He further deemed it to be a last measure of an exhausted government that was crying for help, stretching forth its arms to Ethiopia instead of awaiting a reverse appeal from Ethiopia. Consequently he urged a postponement of the issue . . . until the country was supported by military success.

Military reversals made the situation more serious for the President’s supporters . . . The Radicals and conservatives, resorted to incessant criticism, railing against him and his policy. Horace Greeley attacked Lincoln unmercifully in The New York Tribune and accused him of being responsible for the deplorable results coming from his failure to enforce the Confiscation Act.

The expected easy victory did not follow; but, on the contrary, came [the] sad and humiliating defeat of [General John] Pope [at Second Manassas] in August 1862.

On September 13, he informed a Chicago delegation that he was unable to free slaves by the Constitution, especially when the Constitution could not be enforced in the rebel States, and declared that any emancipation proclamation would at that time be as effective and operative as “the Pope’s bull against the comet.”

Epstein's jet was reportedly set up with a bed where guests had trysts with young girls.

HHS restores legal meaning of 'sex' — what will US Supreme Court, Congress do?

In the very last year of Barack Obama’s presidency, the Department of Health and Human Services made a major change to his signature legislative achievement, the Affordable Care Act. Implemented six years after the ACA became law, the rule change redefined the department’s view of “sex” to include “gender identity,” defined as an internal sense of being “male, female, neither, or a combination of male and female.”

As you might imagine, the rule change—which also included an administrative double-down on a demand that medical professionals participate in abortion—was widely celebrated among many in the media and political class as President Obama rode a wave of accolades on his way out of Washington, D.C. But recently, the Trump administration announced it is reversing that decision, publishing a regulatory proposal that will go into effect after a 60-day waiting period.

The Democratic Party is making an irreversible left turn


I remember a time not so long ago, say 2016, when if you called a Democrat a socialist you were slandering them. Today, a good portion of them will get angry if you do not address them as Democratic socialists. It is truly amazing how socialism has become the new fad among Democrats — especially those running for president.

The Democratic Party platform of 2016 that emerged from its convention was aggressively progressive, and every word contained in it was the result of intense debate and horse-trading. It is nowhere near the socialist content we can expect from their 2020 platform.

Jeffrey Epstein Arrested for Sex Trafficking, And Now Actor Kevin Spacey Questioned for Sexual Assault… Are the Clintons Next?

On Saturday night we found out that Jeffrey Epstein was arrested in New York as he entered the US from a vacation in Paris for sex trafficking crimes of minors.

General Cornwallis had as his strategy to conduct war in South Carolina, taking and holding the important port city of Charleston, and then move north through North Carolina, meeting up with General Howe to end the campaign.  It was a bold plan, and he had dealt a blow to the continental forces on the field of battle on a number of occasions.

But the size of the continent and the temperament of the people made it impossible to prosecute a war of this kind with the forces and lines of logistics he had at his disposal.  The linchpin of his plan called for the utilization of loyalist forces to do battle with patriots.

Only a President like Trump could have pulled off the spectacular Independence Day Celebration in Washington, DC. All the detractors’ criticisms came off like sour grapes compared to the grand show we witnessed beginning with a no holds barred parade and capped off with a glorious fireworks celebration accompanied by the 1812 Overture. The entertainment was All American, clean, classy and heartrendingly patriotic.