Azhar Shallal/AFP/Getty Images
Umm Omar holds a rifle as her son plays with it at their house in Ramadi, west of Baghdad.


A rifle or a shotgun, Bateman?  You posted it.

The Iraqis, Their Weapons And Gun Control

First in dealing with this subject, a bit of background is in order for my readers who were not around for my military coverage and commentary.  My son Daniel was in the 2/6 Marines and conducted a combat tour of Iraq in 2007 to Fallujah.  At this time, the foreign fighters were retreating from Ramadi due to robust Marine Corps (and other) operations there combined with the so-called tribal awakening.  Fallujah was a bad place, and the baddest of the fighters had ensconced themselves there.

The people were so aligned with the insurgents that upon the initial patrols by the Marine Corps, the Marines found themselves to be surrounded by the children of the city, carrying black balloons, the balloons being used to assist the insurgents to sight mortar fire.  As I said, it was a bad, bad place.

The people were willing to send their children out to assist the insurgents.  My son was a SAW gunner, and in addition to patrols and other city-wide operations, he shot insurgents crossing the Euphrates river attempting to enter Fallujah.

Robert Bateman isn’t limited to one idiotic article (indeed, he has written a multitude of them) – he has penned yet another one.


More @ Captain's Journal
Posted by Brock Townsend at Wednesday, January 01, 2014 No comments: Links to this post

Double dating was an art in a '63 Vette


Atrocities by Syrian jihadist rebels have reached sensational new levels, according to a revered nun working with persecuted Christians and an explosive new video report.

Sister Hatune Dogan told WND in a Skype interview that members of the Syrian opposition are draining the blood of Christians they behead and selling vials to Islamic radicals for $100,000 a piece.

The Syrian Orthodox nun explained that the blood is used in a ritual washing of hands in the belief the act atones for sins and provides privileged access to heaven.

The Christians, she said, are beheaded in ceremonies in which they are forced to kneel, with their hands and feet bound, as the Muslim radicals read a death sentence imposed because the victim refuses to renounce Christianity and embrace Islam.

She detailed how the head of the victim is brutally severed with knives. The blood spurting from their necks is captured in basins and then bottled.

“The Muslims sever the necks and collect the blood in vessels to sell the blood. The Muslims believe that if they kill a Christian and wash their hands in the blood of the Christian, they will go to heaven,” she explained.

She said the sale of the Christian blood “is a big business.”

“With this money, the Muslim terrorists can buy more weapons,” she explained.

My mother and father dancing the day away 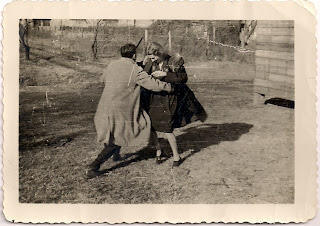 Posted by Brock Townsend at Wednesday, January 01, 2014 5 comments: Links to this post 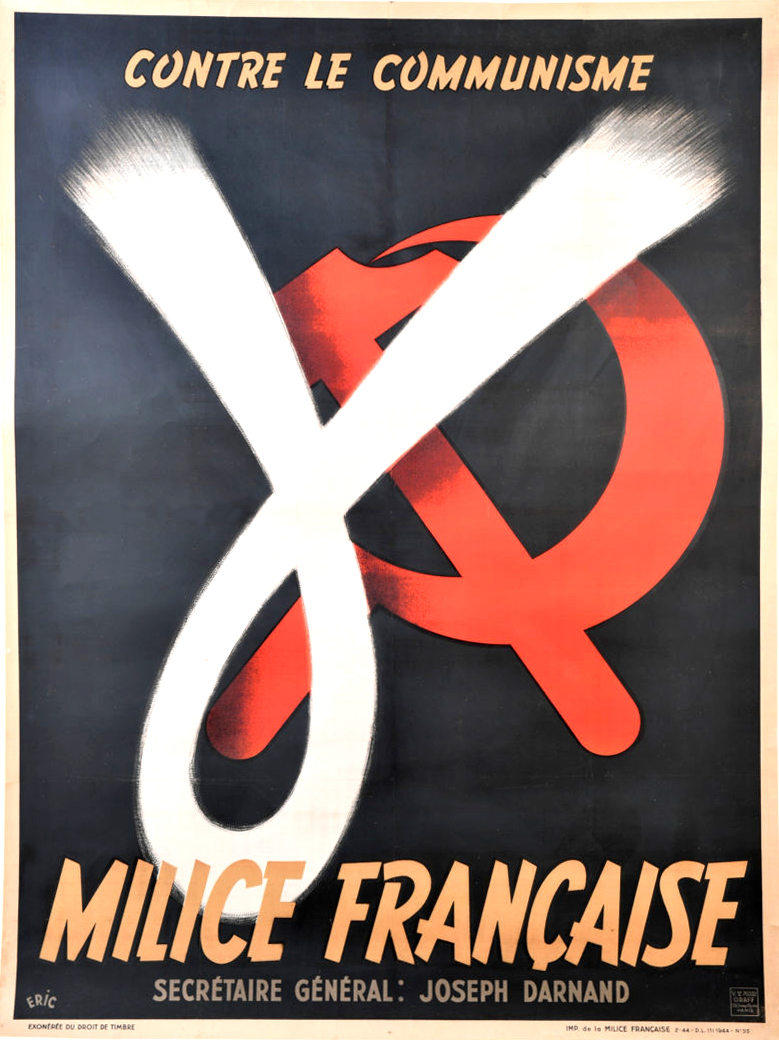 The Milice française (French Militia), generally called the Milice (French pronunciation: ​[milis]), was a paramilitary force created on January 30, 1943 by the Vichy regime (with German aid) to help fight the French Resistance during World War II. The Milice's formal head was Prime Minister Pierre Laval, although its Chief of operations and de facto leader was Secretary General Joseph Darnand. It participated in summary executions and assassinations, helping to round up Jews and résistants in France for deportation. It was the successor to Joseph Darnand's Service d'ordre légionnaire (SOL) militia.

The Milice frequently resorted to torture to extract information or confessions from those whom they interrogated. The French Resistance considered the Milice more dangerous than the Gestapo and SS because they were Frenchmen who spoke the language fluently, had extensive knowledge of the towns and countryside, and knew people and informants.

Milice troops (known as miliciens) wore a blue uniform coat, brown shirt and a wide blue beret. (During active paramilitary-style operations, a pre-war French Army helmet was used.) Its newspaper was Combats (not to be confused with the underground Resistance newspaper, Combat). It employed full-time and part-time personnel, and had a youth wing. The Milice's armed forces were officially known as the Franc-Garde. Contemporary photographs show the Milice armed with a variety of weapons captured from Allied forces.


More @ WIKI
Posted by Brock Townsend at Wednesday, January 01, 2014 No comments: Links to this post

The Palestinian ambassador to the Czech Republic was killed in an explosion at his Prague residence on Wednesday after a safe blew up as he was trying to open it.

Jamal al-Jamal, 56, suffered severe head, chest and stomach wounds in the incident. He was taken to Prague military hospital but later died from his injuries. An unidentified 52-year-old woman was also treated in hospital for shock and smoke inhalation.


More @ The Telegraph
Posted by Brock Townsend at Wednesday, January 01, 2014 No comments: Links to this post

A Roanoke Rapids man with a history of violence recently released from prison has been shot while robbing a local business and is in critical condition.

More @ The Daily Herald
Posted by Brock Townsend at Wednesday, January 01, 2014 2 comments: Links to this post

A man shot and killed a burglar who forced his way into a home in south Fulton County Tuesday
morning, according to police.

Police said the burglar tried to enter the back door of the home. The homeowner heard the commotion and then opened fire.

Channel 2's Tom Jones spoke to police and a woman, who said she is the sister-in-law of the homeowner.


More with video @ WSBTV
Posted by Brock Townsend at Wednesday, January 01, 2014 No comments: Links to this post

Here's a question that I've asked in the past that needs to be revisited. Unless one wishes to obfuscate, it has a simple yes or no answer. If one group of people prefers strong government control and management of people's lives while another group prefers liberty and desires to be left alone, should they be required to enter into conflict with one another and risk bloodshed and loss of life in order to impose their preferences on the other group? Yes or no. My answer is no; they should be able to peaceably part company and go their separate ways.


More @ Townhall
Posted by Brock Townsend at Wednesday, January 01, 2014 No comments: Links to this post

10 most talked about self-defense stories of 2013

Everybody loves a good self-defense story with a happy ending, i.e. the good guy prevails and the bad guy loses. But there are some stories that – for one reason or another – seem to stand out above all the rest.

Here is a look at some of the most popular, most shared and most commented on defensive gun use stories published on Guns.com throughout 2013. And no, George Zimmerman didn’t make the list because, although he can’t seem to avoid media attention, the Trayvon Martin shooting occurred in 2012.

The suspect’s greediness turned out to be a fatal flaw when he returned inside a Bassfield, Mississippi, convenience store during a robbery in November.  He had already collected money from the register and shot the owner in the process, but decided to go back in for the remaining cash. Little did he know that in the moments while he was gone, the owner armed himself with a 9mm, then opened fired when the suspect returned, fatally shooting him more than 10 times.


More @ Guns
Posted by Brock Townsend at Wednesday, January 01, 2014 No comments: Links to this post

White Renegade of the Year


Who did the most damage when he could have done the most good?
Today we inaugurate what we expect to be an annual series. At the end of each year we will profile a white person who could have been a champion for his people, but instead joined the fight against us.

The White Renegade of the Year can be someone like this year’s award-winner, who attracted and mobilized supporters only to turn on them, or he can be someone who has never shown the slightest sign of racial awareness but who has been especially diligent in working against his own people.

There are so many good candidates that we could make a white renegade award every month—heck, every day—but this year’s inaugural honors go to the junior senator from Kentucky, Rand Paul.

“For of all sad words of tongue or pen, the saddest are these: ‘It might have been!’ ” So we may say of Rand Paul.

Much like his father Ron, the younger Paul was initially a favorite of white advocates, running as a populist, anti-Establishment candidate who strongly opposed illegal immigration. His platform on border security included the construction of an electric border fence—underground. When he beat the odds to enter the Senate, it was as if Tom Tancredo had somehow reached the upper chamber—indeed, Congressman Tancredo endorsed Rand Paul in his Senate run and his Team America PAC donated money to him.


More @ American Renaissance
Posted by Brock Townsend at Wednesday, January 01, 2014 No comments: Links to this post

Letter from a cop

Mr. Flaherty,
First of all I want to thank you very much for writing your book.
I have been a Sheriff’s Officer for 10 years, my father was a Deputy, my grandfather was a chief of police, and my brother is a cop too.
Over the past week I discovered your book online through a forum and realized that it is exactly what I have been looking for to sustaniate all of the current trends I am seeing in our area.  When my grandfather became a police officer, this area was an iconic booming proud city that was full of blue-collar hard working people.
The police department was known for its take-no-shit approach to criminals and the jail was no different. Up until recently, in liue of the entitlement generation and the never ending lawsuits, we were able to correct the local criminal population with force and proper sentencing guidelines.
More @ White Girl Bleed A Lot
Posted by Brock Townsend at Wednesday, January 01, 2014 No comments: Links to this post