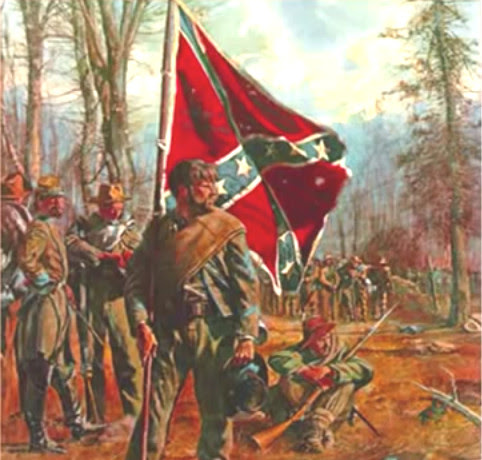 Recently in an article, I quoted from the book Embattled Banner by Don Hinkle where he described the tactics of those who hate Confederate symbols, particularly the NAACP. He stated on page 163 of his book that: “Such strategy has been used by anti-flaggers throughout the South ever since the battle flag debate surfaced. In short, their strategy is this: Go in and agitate; get rid of what you can and then pull back; wait for things to calm down, then return to wipe out the rest.”

With things quiet right now on the anti-Confederate flag front, I wonder if that’s what we are seeing at this point. That dubious photo of Dylann Roof holding the Confederate battle flag surfaced almost immediately after the tragic shooting of those black folks in Charleston and it was like the first round of an orchestrated wrestling match. Every scurvy politician, North or South, started screaming that the Battle flags all had to come down, the monuments had to disappear, the streets and parks all had to be renamed (preferably for socialists)–the whole nine yards!  Well, these folks got some of what they wanted.  The Political Class, always known to have the courage of a flea, especially in an election year, did exactly what the Cultural Marxists’ script called for them to do–they waffled, caved in, and tried to appear to take the moral high ground by calling for Confederate flags to come down.

They did exactly the same thing the Communists did. In this case the “moral high ground” was a swamp.

Via comment by Anonymous on "White Free Zones" established on College Campuses..." 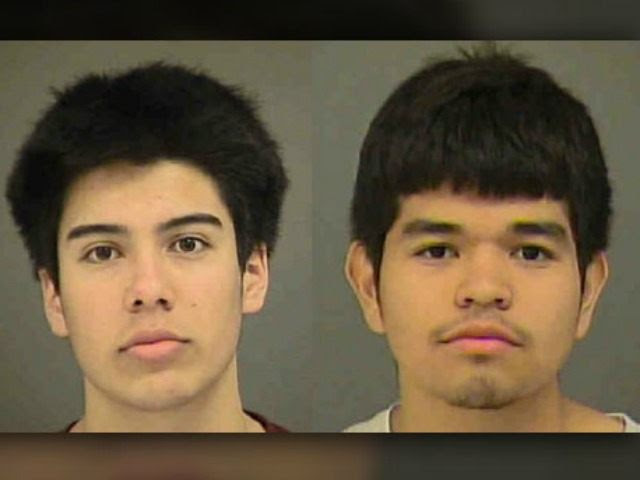 Five Hispanic teens were arrested and charged with rape after a 17-year-old North Carolina girl was found beaten and brutally raped in a field, authorities report.

A resident of a Mint Hill apartment complex found the girl lying naked and unconscious in a field behind the building.

An investigation led to the arrests of five Hispanic teens, including two juveniles. 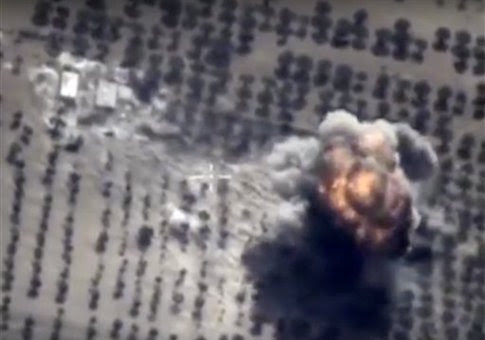 U.S. military pilots who have returned from the fight against the Islamic State in Iraq are confirming that they were blocked from dropping 75 percent of their ordnance on terror targets because they could not get clearance to launch a strike, according to a leading member of Congress.

Strikes against the Islamic State (also known as ISIS or ISIL) targets are often blocked due to an Obama administration policy to prevent civilian deaths and collateral damage, according to Rep. Ed Royce (R., Calif.), chair of the House Foreign Affairs Committee.

Costa Rican authorities on Thursday detained a Syrian woman with a Greek passport, two days after five Syrian men were arrested in Honduras while attempting to travel to the United States on fake passports.


More @ The Gateway Pundit
Posted by Brock Townsend at Friday, November 20, 2015 4 comments: Links to this post 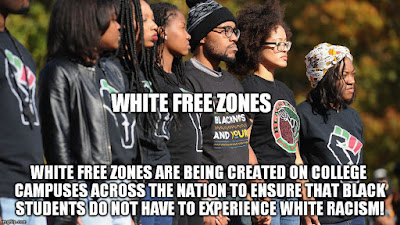 ALL ACROSS THIS FREE LAND AMERICA ON COLLEGE CAMPUSES "WHITE FREE ZONES" ARE SPRINGING UP.  WFZ'S THAT PROTECT SENSITIVE BLACK STUDENTS FROM THE PERCEIVED RACISM OF THEIR WHITE CLASSMATES.

ONE MUST WONDER WHERE THOSE "BLACK FREE ZONES" ARE LOCATED SO THAT WHITE STUDENTS WHO FEEL THE STING OF BLACK RACISM CAN HAVE A PLACE TO RETREAT FROM BLACK STUDENTS THAT HURL RACIST INSULTS SUCH AS CRACKER AND RED NECK THEIR WAY.  YEA, "JIM CROW" IS ALIVE AND WELL AGAIN IN AMERICA.  BUT TODAY'S JIM CROW, IS DIFFERENT AND MUCH WORSE THAN BEFORE, IN THAT UNDER THE OLD SYSTEM BOTH PARTIES HAD A SAFE ZONE.

NOW JUST ONE SIDE IS ALLOWED THIS SANCTUARY FROM THE REAL WORLD.  A REAL WORLD THAT THESE RADICAL COLLEGE STUDENTS WILL HAVE TO FACE WHEN THEY LEAVE THOSE IVY COVERED WALLS.  A WORLD WHICH THEY WILL NOT BE READY FOR.  A WORLD WHICH WILL NOT PROVIDE THE "WANTS" THEY FEEL THEY ARE ENTITLED TOO.  IN SHORT, THEY WILL REMAIN MAD AT WHITEY AND CONTINUE TO BLAME HIM FOR ALL THEIR WOES WHILE THEY WAIT IN THE FOOD STAMP LINE. 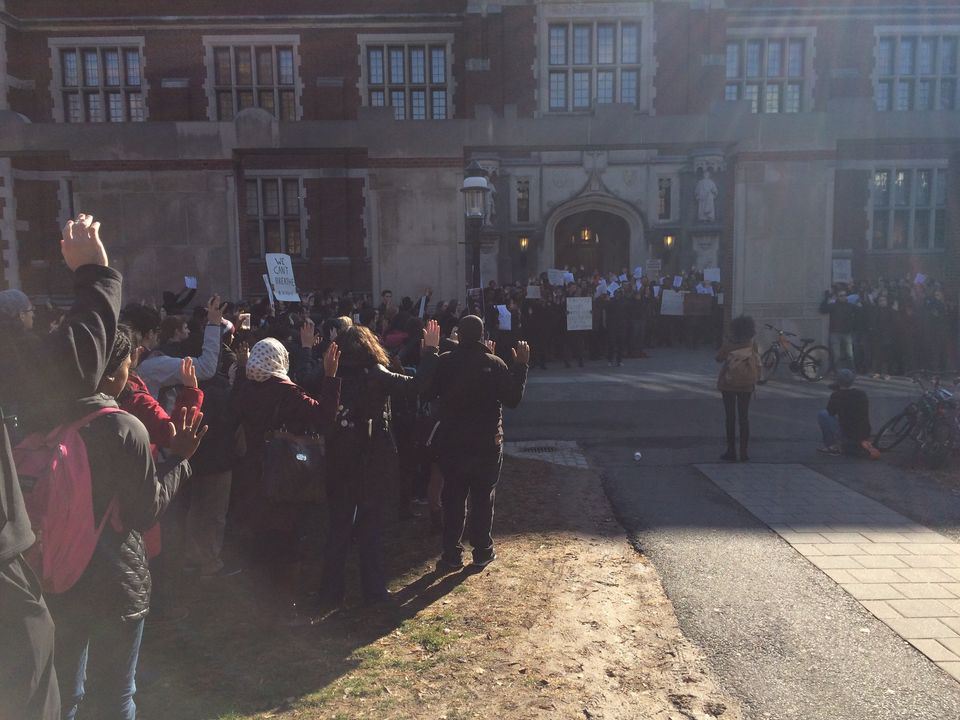 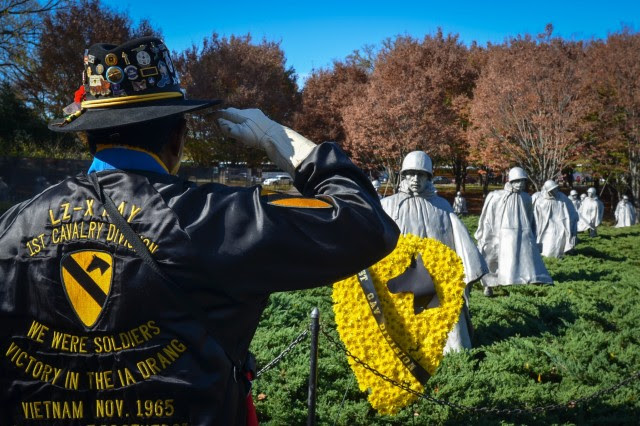 It is among the most famous battles in the storied history of the 1st Cavalry Division and the first major battle of the Vietnam War.

Veterans from the division gathered in Washington, D.C., Nov. 14, to commemorate the anniversary of the battle and pay tribute to their fallen comrades in an event hosted by the 1st Cavalry Division Association.

"It's hard to believe it's been 50 years," said Bill Beck, a former machine gunner with Company A, 1st Battalion, 7th Cavalry Regiment, who fought at LZ X-Ray. "We're lucky to have made it this far."

While the battle now has a legendary status, Beck said that at the time, the Soldiers on board the UH-1 Huey helicopters heading into the valley weren't aware that they were also riding into the history books.

"We knew nothing [about the battle's eventual historical significance]," he said. "It was just another day for us."


More @ Army
Posted by Brock Townsend at Friday, November 20, 2015 No comments: Links to this post

The specter, on the nation’s campuses, of frightened, middle-aged white educators, mostly men, resigning in fear of a mob rising in rage against hurtful words and gestures—all constitutionally protected speech—is an organic extension of the American educational project, down to your child’s school.

If your kids are in the country’s educational gulag—primary, secondary or tertiary—however well they’re faring; they’re still being brainwashed and de-civilized. Most private schools are now bastions of progressivism, too. “Progressivism,” of course, does not imply progress.

The “justice” for which privileged youngsters on America’s coveted campuses are rioting—the right to silence and purge dissent and dissidents—they’ve imbibed in schools public and private, prior to arriving at the university.


More @ The Unz Review
Posted by Brock Townsend at Friday, November 20, 2015 No comments: Links to this post

In denouncing Republicans as “scared of widows and orphans,” and castigating those who prefer Christian refugees to Muslims coming to America, Barack Obama has come off as petulant and unpresidential.

Clearly, he is upset. And with good reason.

He grossly, transparently underestimated the ability of ISIS, the “JV” team, to strike outside the caliphate into the heart of the West, and has egg all over his face. More critically, the liberal world order he has been preaching and predicting is receding before our eyes.

Suddenly, his rhetoric is discordantly out of touch with reality. And, for his time on the global stage, the phrase “failed president” comes to mind.

NC: Police fail in gun grab event: "One BB gun and a knife"

NC police department urges residents to turn in their guns

Earlier, the city of Greensboro, North Carolina offered to take “unwanted” guns from people and have them sign a pledge of non-violence.


Greensboro police are asking at least 1,000 residents of the Gate City to show their commitment to safety by signing a “Pledge of Nonviolence” this Saturday, Nov. 14 at Destiny Christian Center, 2401 Randleman Rd. from 9 am to 3 pm. At the same event, gun owners can safely turn in unwanted firearms from their homes. Police employees will be accepting handguns, rifles, shotguns, and ammunition at the event. This is not a buy-back program. No cash will be given in exchange for weapons voluntarily surrendered to police.

You know exactly how that turned out. One BB gun and a knife. Unbelievable. The police department in Greensboro asked for the public to turn in weapons at a non-buy back event in the name of ‘non-violence’. It failed miserably.

“From 2004 to 2014, over 2,000 terror suspects legally purchased guns in the United States,” Christopher Ingraham of The Washington Post asserts. “Given France’s strict gun laws, the terrorists who attacked Paris on Friday may have turned to black market sources for the weapons they used. But in the United States, known and suspected terrorists are allowed to purchase firearms under federal law.”

It’s hardly a new charge he’s dusting off for a convenient occasion—The New York Times was screaming the same hysterical narrative six years ago.  PBS and AP picked it up in 2011, then NPR in 2013…

What did Rahm Emanuel say about never letting a serious crisis go to waste?