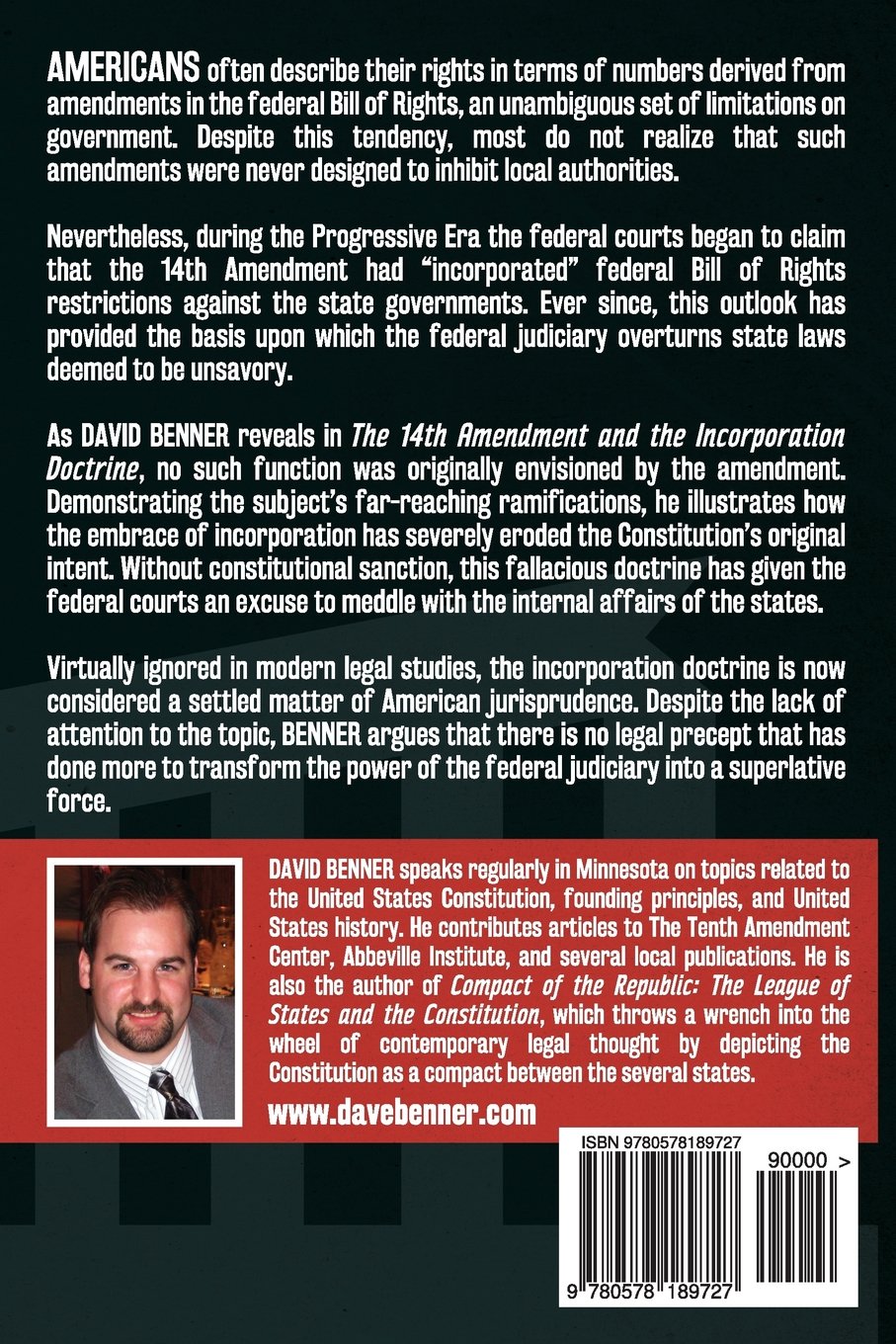 A review of The 14th Amendment and the Incorporation Doctrine by David Benner (Minneapolis: Life and Liberty Publishing Group, 2017)

Even though I have always been a strong advocate of states’ rights and sovereignty, and for safeguarding the federal system, the “incorporation doctrine” had always troubled me. What is meant by the “incorporation doctrine”? The application, by the federal courts, of the Bill of Rights restrictions upon the states. In other words, the states are bound by the restrictions found in the first eight amendments to the Constitution.

I certainly didn’t like the doctrine of incorporation but I once believed that it was simply the way things were. As long as states were in the Union, then they must uphold the US Constitution, and if they chose not to, their only recourse was ultimately secession. But, of course, I had never bothered to dig into the particulars of the legal theory to determine if it was sound or not.


More @ The Abbeville Institute
Posted by Brock Townsend at Tuesday, May 22, 2018 No comments:

The present House Republican leadership has proven that it’s part of “the Swamp.” Consequently, a vote to promote any member of today’s House GOP leadership is a vote for the Swamp.  It’s time to Clean House.

There must be a real race for Speaker of the House. Now. No backroom deals. A real race, starting this spring, to make every incumbent and candidate commit on the record, as a campaign issue, whether they’ll vote to save the Swamp or drain it.

America needs you to declare yourself as a candidate for Speaker at once. We write to you on behalf of millions of Americans who want Congress to Drain the Swamp.

That’s borne out by an instructive new poll of likely voters – Republicans, Democrats and independents – conducted by John McLaughlin for the Ear to the Ground Listening Project.  It shows that the majority agrees that the current congressional leadership has failed to “eliminate the influence of the network of DC-centric professional bureaucrats, media, and insider elites.”  As many as 60% of those polled want to drain the Swamp.


More @ Tea Party Patriots
Posted by Brock Townsend at Tuesday, May 22, 2018 No comments:

Boy Scouts To Provide Condoms To Children At 2019 Jamboree

The Hunter Becomes the Hunted

The scenario anticipated more than a year ago in King vs. King has advanced to the semi-finals. The Russian collusion affair, which began with the incoming president on the defensive, has now become a set of simultaneous offensives with each side trying to jail the other. "President Trump on Sunday said he would 'demand' a Justice Department investigation into whether the FBI 'infiltrated' his 2016 presidential campaign," USA Today reported.

I hereby demand, and will do so officially tomorrow, that the Department of Justice look into whether or not the FBI/DOJ infiltrated or surveilled the Trump Campaign for Political Purposes - and if any such demands or requests were made by people within the Obama Administration! 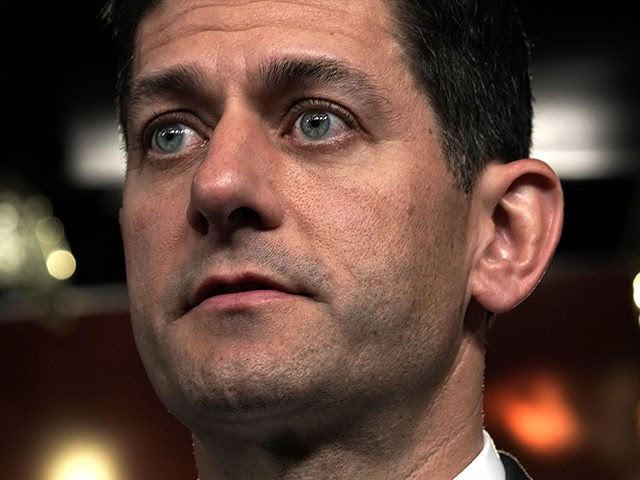 Rep. Paul Gosar (R-AZ) on Monday evening became the first sitting GOP member of the House of Representatives to publicly call for the removal of House Speaker Paul Ryan now, rather than on Ryan’s planned schedule post-election, during an interview on Breitbart News Tonight on SiriusXM.

During a discussion with host and Breitbart News Senior Editor-at-Large Rebecca Mansour about Ryan’s failures on immigration with a looming pro-amnesty discharge petition hanging in the balance, Gosar hammered the entire current leadership team.


More @ Breitbart
Posted by Brock Townsend at Tuesday, May 22, 2018 No comments:

Roger Stone: ‘John Brennan Should Pop the Glass Capsule and Take the Cyanide Now; He’s Going to Die in a Federal Penitentiary’ 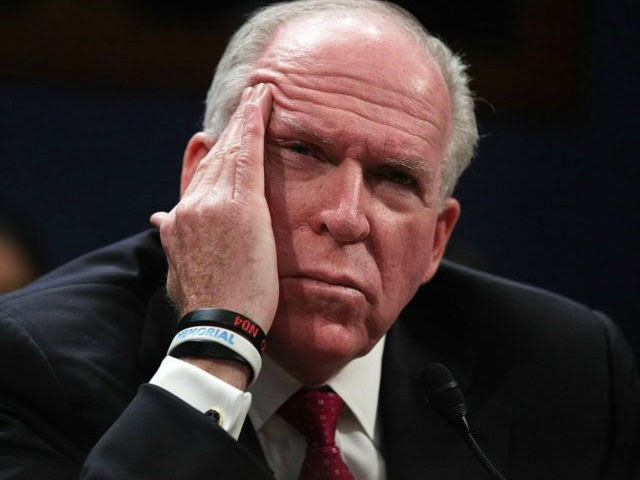 PragerU: The Truth about the Vietnam War

To deter Chinese imperialism, the US should ask to station long range missiles in Vietnam and the Philippines 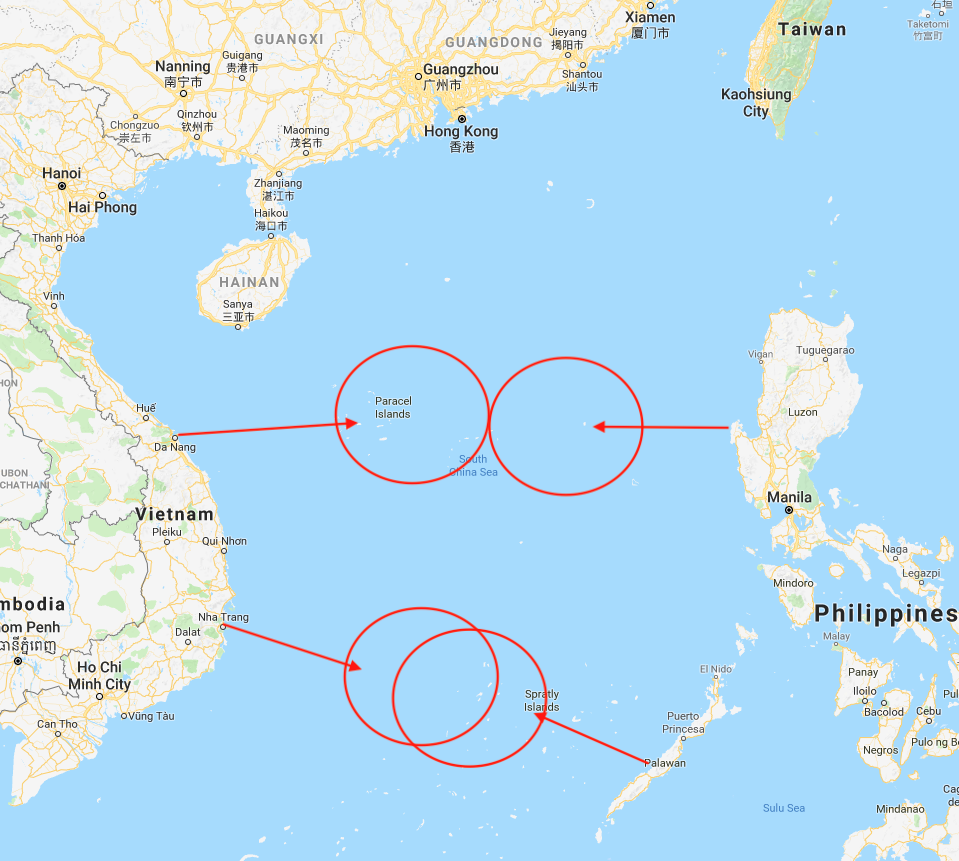 The Vietnamese hate the Chinese (1K years of occupation) so we shall see.

In response to China's aggressive military exercise last week, in which its air force landed bomber aircraft on islands in the Paracel Island chain of the South China Sea, the U.S. should negotiate with Vietnam and the Philippines toward stationing long-range missiles on their soil.

Those missiles would allow the U.S. to play China at its own game: dangling a military veto over the transit of Chinese commercial and military elements through the South China Sea if China attempted to do the same to the U.S. or its allies. The purpose here would not be to instigate a conflict with China but rather to deter China from doing that which it wishes to do. Namely, using its island construction and militarization campaign in the South China Sea to economically and diplomatically pressure regional nations to kneel to its influence.

Yes, there’s a major free speech problem on our campuses

At 16 years old, Norvilia Etienne’s mother told her a story that changed her life forever, setting her course to become a courageous, compassionate champion for the vulnerable.

Not long after, in 2016, Norvilia would experience a second rude awakening, this time at the hands of so-called “tolerant” administrators at Queens College in New York City.

All Norvilia asked for was equal treatment, but that was apparently too high a bar for Queens College to reach. In the end, Norvilia had no option but to sue the school to win back her right to free speech.With hundreds of students like Norvilia forced to win back their civil rights through the courts, Norvilia’s case points to a much larger trend, which itself has prompted the House Committee on Oversight and Government Reform to hold a second hearing on the same subject in the past year. 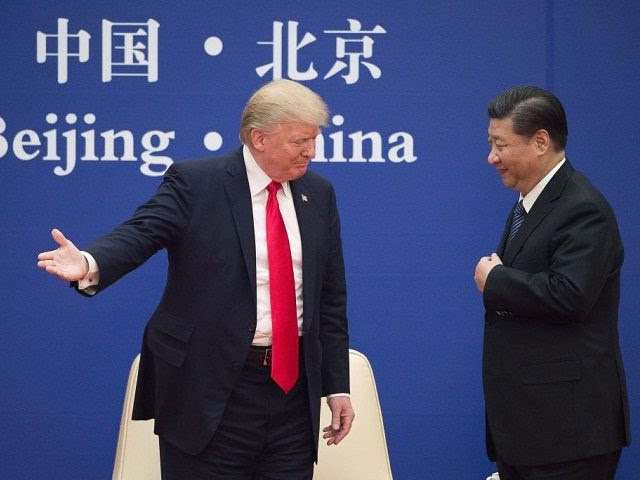 China announced Tuesday it will slash tariffs on imported cars, a move that could benefit the global auto industry.


More @ Breitbart
Posted by Brock Townsend at Tuesday, May 22, 2018 No comments: 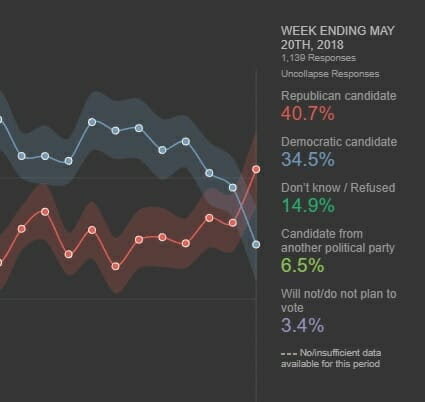 Democrats are hoping for a blue wave to take down Republicans in the 2018 midterm elections.
Then they can focus on impeaching President Trump over his mean tweets.


But the latest Reuters  generic poll shows Republicans suddenly with a 6 point lead!

Video has emerged of the shooting that happened in Marseille, France on Monday that authorities are now investigating as a kidnapping and not a terrorist attack.

What I Learned in the Peace Corps in Africa: Trump Is Right

Three weeks after college, I flew to Senegal, West Africa, to run a community center in a rural town.  Life was placid, with no danger, except to your health.  That danger was considerable, because it was, in the words of the Peace Corps doctor, "a fecalized environment."

In plain English: s--- is everywhere.  People defecate on the open ground, and the feces is blown with the dust – onto you, your clothes, your food, the water.  He warned us the first day of training: do not even touch water.  Human feces carries parasites that bore through your skin and cause organ failure.

Never in my wildest dreams would I have imagined that a few decades later, liberals would be pushing the lie that Western civilization is no better than a third-world country.  Or would teach two generations of our kids that loving your own culture and wanting to preserve it are racism.

Via David "G-d I hope this results in some good old-fashioned hangings."


Revelations that an FBI informant insinuated himself into the Trump campaign have led some congressional investigators to rethink their theories on how and why former President Barack Obama's Justice Department began investigating the 2016 Trump presidential effort.

Most reporting has focused on the July 31, 2016, creation of a document formally marking the beginning of the FBI counterintelligence probe targeting the Trump campaign. The document, known as the electronic communication, or EC, is said to have focused on the case of George Papadopoulos, the peripheral Trump adviser who has pleaded guilty to lying to special counsel Robert Mueller about his contacts with people connected to Russia.


More @ Washington Examiner
Posted by Brock Townsend at Tuesday, May 22, 2018 No comments: