U.S. Rep. Gary Palmer, R-Hoover, is among 18 congressman to co-sponsor a resolution Tuesday to impeach IRS Commissioner John Koskinen on the grounds that Koskinen defied a congressional subpoena in the investigation into ex-Commissioner Lois Lerner's emails. Under Lerner, the agency had been accused of unfairly targeting conservative and tea party groups for IRS scrutiny because of their political ideology.

Police On The Roof

A lawsuit filed last week against the owners of the Waco Twin Peaks alleges that before the first shot was fired, “occupied…the rooftop of a neighboring restaurant.”

The suit was filed on behalf of the widow, children and parents of Matthew Mark Smith, a member of the Cossacks Motorcycle Club and a former member of the Scimitars Motorcycle Club. Smith was shot once in the upper right back by a jacketed projectile that left a quarter inch hole. That would be consistent with a projectile fired by an FN P90 or an M16 both of which were carried by police at the scene. That jacketed projectile partially fragmented and  was recovered. It was the shot that killed Smith. It caused his right pleural cavity to fill with about a liter of blood. He was also shot in the lower, lateral abdomen by a projectile that was never recovered but that left a slightly larger hole that would match common pistol rounds.


More @ The Aging Rebel
Posted by Brock Townsend at Tuesday, October 27, 2015 No comments:

Liberals tell us immigration today is no different than decades ago, but that’s a lie.

According to a new report by the Senate Judiciary subcommittee on Immigration and the National Interest, which is headed by Rep. Jeff Sessions (R-AL), the US essentially adds the equivalent of Los Angeles every three years or about over 10 million.


Former heavyweight champion Mike Tyson endorsed Donald Trump today on HuffPost live. The two have have been friends since Tyson was a world champion.


More @ The Gateway Pundit
Posted by Brock Townsend at Tuesday, October 27, 2015 No comments: 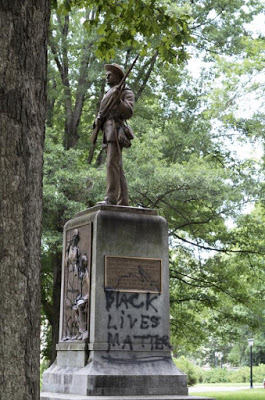 "There is no denying that statue represents men who fought for...murder and systematic racism..."

~ Pretty blonde CAROLINA student, protesting with Black Lives Matter activists today, referring to Silent Sam, the monument on campus to honor the UNC students who gave their lives on the field of honor defending the Old North State.