A widow was given ample notice before her $280,000 house was sold at a tax auction three years ago over $6.30 in unpaid interest, a Pennsylvania judge has ruled.

The decision last week turned down Eileen Battisti's request to reverse the September 2011 sale of her home outside Aliquippa in western Pennsylvania.

Battisti, who still lives in the house, said Monday that she plans to appeal to Commonwealth Court. That court earlier ordered an evidentiary hearing, which led to last week's ruling.

On Monday, April 21, inBloom, the controversial company formed with a grant from the Bill and Melinda Gates Foundation to create a national database of student-specific data, announced that it is closing its doors. This is a huge victory for student privacy advocates.

Home School Legal Defense Association has long opposed such Orwellian attempts to track students from preschool through graduation from college and entry into the workforce. We believe that a national database would not only threaten the privacy of students, but would also be susceptible to abuse by government officials or corporate representatives and could jeopardize student safety. 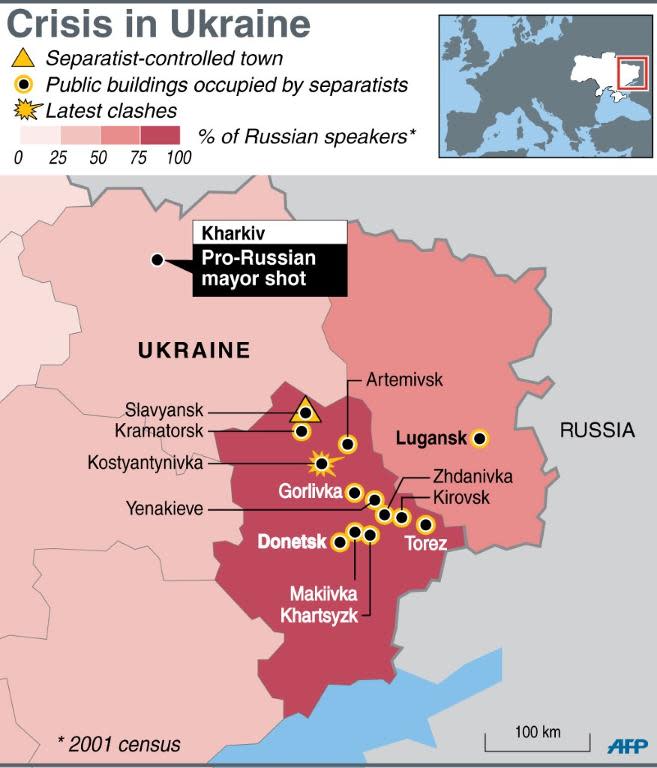 A mob spearheaded by around 30 men carrying Kalashnikov assault rifles and grenade-launchers attacked the regional police headquarters in Lugansk, raising the heat in the worst East-West confrontation since the Cold War.

They had earlier seized the regional prosecutors' office, tearing down the Ukrainian flag and replacing it with that of Russia, which the West blames for stoking the violence in the ex-Soviet Republic.

More than a dozen towns and cities in the east have now fallen to pro-Russian rebels, who see the Western-backed leaders in Kiev as illegitimate "fascists" and want either independence or outright accession to Russia.

"It's good what the young people are doing. We don't want this Nazi junta that has seized power in Kiev. We don't recognise them. I want my children and grand-children to grow up in Russia," one retired engineer told AFP as he surveyed the violence in Lugansk.

The clergy members said that they'd like to perform same-sex marriage ceremonies in their congregations, but that they can't because of the "unjust law." Their attorney, Jake Sussman, says it's the only case to bring the First Amendment religious freedom claims among the more than 60 marriage equality cases pending in the nation's state and federal courts.

"North Carolina's marriage laws are a direct affront to freedom of religion," said the Rev. J. Bennett Guess, executive minister with the Cleveland-based United Church of Christ, which is a plaintiff in the lawsuit. "We feel that it is important that any person that comes into community life of a United Church of Christ congregation be afforded equal pastoral care and equal opportunity to religious services that clergy provide."

“God” Replaced With “Peace” In Pledge of Allegiance at Madison, Wisconsin High School

One nation under God, indivisible, with liberty and justice for all.”
For the past few years, this line in the Pledge of Allegiance has caused an increasing amount of debate among Americans. Despite this debate, 85% of Americans still believe that “under God” should be kept in the Pledge, while only 8% do not. Forget the lawsuits, conflict, and uproar, saying that controversial line at schools daily is still part of the law.


Unfortunately, a Madison, Wisconsin high school has decided to go against that law over the past couple months.

All the more reason to pick one.

The biggest parlor game on Wall Street and in corporate boardrooms these days is guessing whether former Florida Gov. Jeb Bush will run for president and save the GOP’s old establishment base from its rising populist wing.

The second most popular game is guessing what happens if Jeb says no.

A “vyshivanka” parade of activists wearing brightly embroidered Ukrainian folk shirts and blouses has been held in Lvov to mark the 71st anniversary of the Waffen SS Galizien (Halychyna) division.

The marchers, holding SS Halychyna banners, representing a yellow lion with three crowns standing on the hind legs against the blue background, walked from the monument to Ukrainian nationalist leader Stepan Bandera to the monument for victims of the Bolshevik regime and political reprisals, an Interfax correspondent reported.

The organizers wanted to unfurl a banner at the front of the column showing soldiers of the SS Halychyna division and heroes of the “Heavenly Hundred,” killed in central Kiev, but several Maidan self-defense activists and relatives of those killed on Independence Square in Kiev protested and the banner was removed.


More with video @ InSerbia
Posted by Brock Townsend at Tuesday, April 29, 2014 No comments: