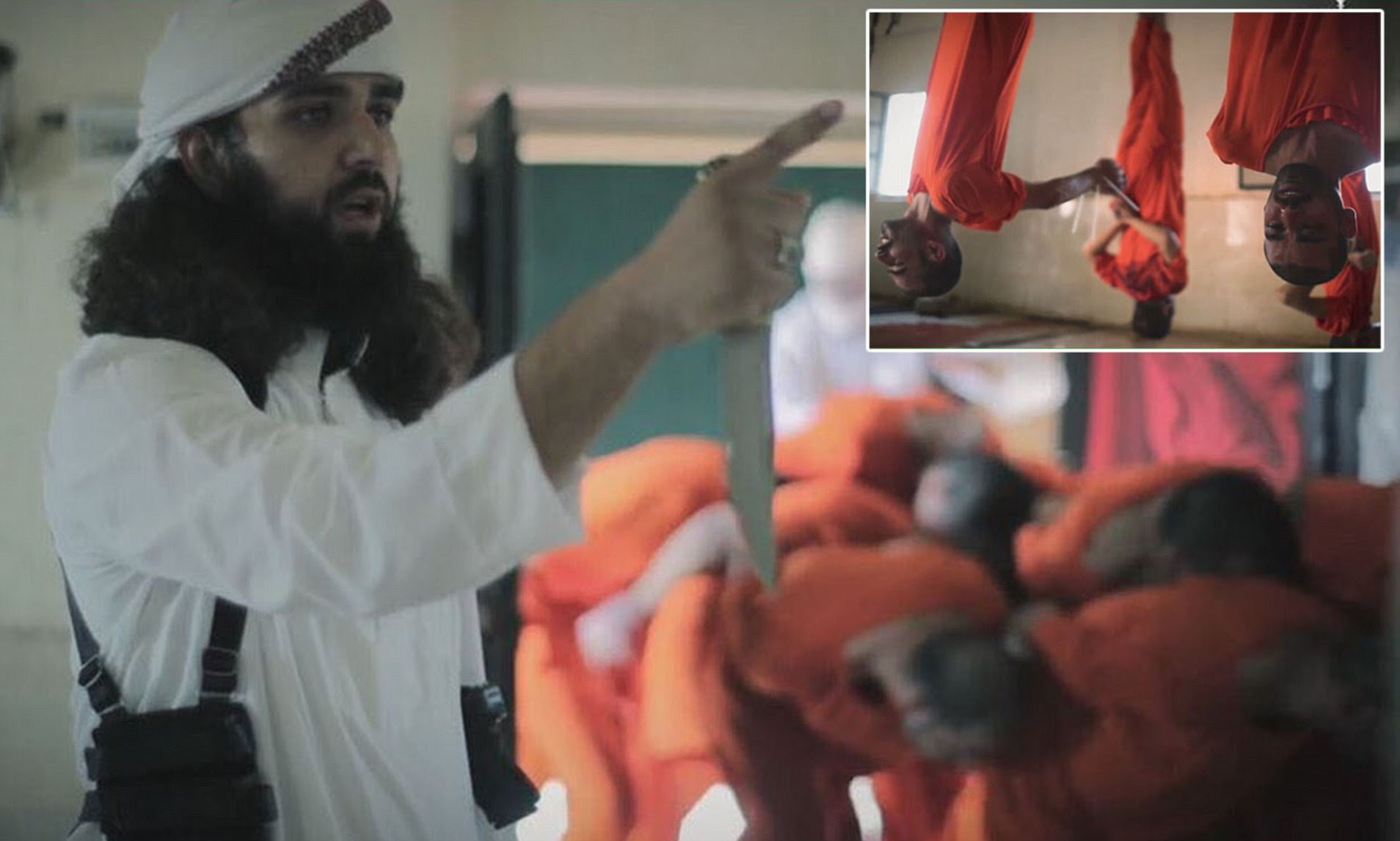 Please don't watch as reading is more than sufficient.


More @ Daily Mail
Posted by Brock Townsend at Saturday, September 17, 2016 No comments: Links to this post


"They are truly disgusting, this modern day world-class Bonnie and Clyde deadly duo.  There is really no adequate word or phrase that can fully capture and express the shameless depravity of Bill and Hill. Since so much information about the Clinton's is readily available with almost no effort, one can only conclude her supporters are truly deplorable and irredeemably pathetic.  The following is a first hand account of Clintonism and how it has sorely impacted Haiti and damaged the lives of hundreds of thousands of children and adults in that island nation. It is a good place to add to your knowledge of the Clinton Family Crime Foundation.

In a just nation, obviously not the one we have, these two thieves emboldened by decades of outrageous escapes from prosecution, would be spending their lives in federal prison, not positioning themselves for a second bite at the golden DC apple where Bill can resume bimbo-romping in the White House and they can rent the Lincoln Bedroom, as though they are innkeeper's at a bed and breakfast."


He came close to crying.

Former Senate President of Haiti, Bernard Sansaricq, shocked a large crowd at a Trump campaign event in Little Haiti, FL. Sansaricq exposes all of the dirty dealings of the Clinton’s in Haiti while he was still in office. Donald Trump to his credit, allowed him to speak his mind and expose to the world what kind of criminals are attempting to scratch and claw their way back into our White House.

He also suggests that Hillary Clinton “disclose the audit of all money” related to the Haiti earthquake crisis, as he claims they scammed the poorest citizens of Haiti out of BILLIONS of dollars through the Clinton Foundation.

Watch this stunning confession of bribery, and threats during the Clinton presidency when Bill tried to oust the regime in Haiti.
Posted by Brock Townsend at Saturday, September 17, 2016 7 comments: Links to this post 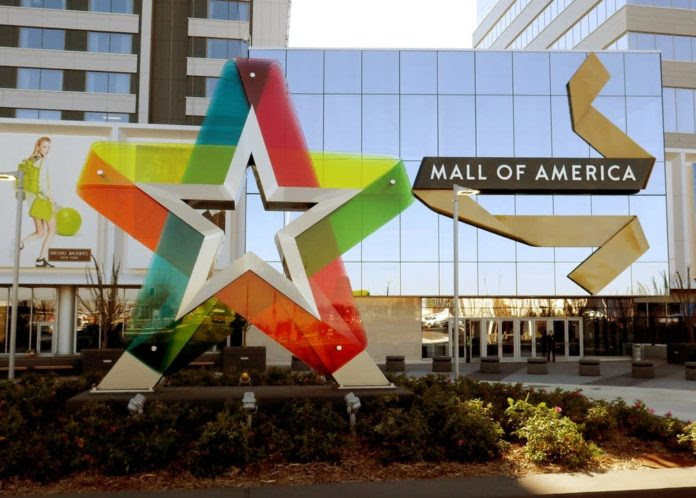 Every year thousands of Muslims gather at Minnesota’s Mall of America – not to shop – but to celebrate the Islamic holiday of Eid Al Adha.

This year Muslim mobs ran through the mall terrorizing shoppers.


More with video @ Alpha News
Posted by Brock Townsend at Saturday, September 17, 2016 No comments: Links to this post

Of 11,000 Syrians Obama administration has brought into country this year… less than ½ of 1% have been Christian.

Now let’s analyze one fact that is apparently not common knowledge.


United Nations Secretary-General Ban Ki-moon has harshly criticized Israeli settlements in the West Bank and is calling for urgent action to save “the two state solution.” He insists that Israeli settlements in the West Bank “are illegal under international law” and he told reporters that the “occupation” of Palestinian-controlled territories “must end.” These comments represent perhaps the strongest statements that any UN Secretary-General has ever made against Israel, and they come at a very ominous time. As I detailed just a few days ago, there is a major push to try to get some sort of UN Security Council resolution on the Israeli-Palestinian conflict before Barack Obama leaves office.

As you will see below, this is something that UN Secretary-General Ban Ki-moon obviously endorses.

Those that are hoping for a “two state solution” know that fresh negotiations between the Israelis and the Palestinians are not likely to happen any time in the near future. So if the “peace process” is going to move forward, it is going to have to happen at the United Nations.

Ban Ki-moon is among those that are desperate to try to save the “two state solution,” and as the UN begins a new annual session this week he is urging imminent action. The following comes from the official UN website…

Tensions Rising in Germany; Citizens clash with Syrian refugees--and each other.

Germany is blowing up again over migration. The Saxon town of Bautzen has, like dozens of similar places across Germany, a barracks for some of the million or two Middle Eastern migrants who have been streaming across the Mediterranean for the past year-and-a-half. People in Bautzen aren't used to foreigners, and now groups of young men have taken to congregating in city's central square, the Kornmarkt. The migrants say they come there for the free internet. This upsets the locals, 80 of whom waged a pitched battle against 20 teenage migrants on Wednesday evening. Alcohol was involved on both sides. To judge from the video at FAZ.com, accounts differ on who is to blame. The Germans say that the young migrants (whom they refer to as UMAs, the German acronym for unaccompanied minors seeking asylum) are harassing women and smashing things. The UMAs, in turn, say the locals (whom they refer to as "Nazis") accost them every day with shouts of "Foreigners out!"


More @ The Weekly Standard
Posted by Brock Townsend at Saturday, September 17, 2016 No comments: Links to this post


Justin “Big Chief” Shearer of Street Outlaws surprised street and drag racing fans alike earlier this year when he announced his intent to participate in the 2016 Chevrolet Performance U.S. Nationals – driving a car fueled by a factory engine. While he didn’t get through the first qualifying round, ranking in 31st place, the fact that he got there at all is impressive considering the age and make of his engine.


More @ Racing Junk
Posted by Brock Townsend at Saturday, September 17, 2016 No comments: Links to this post 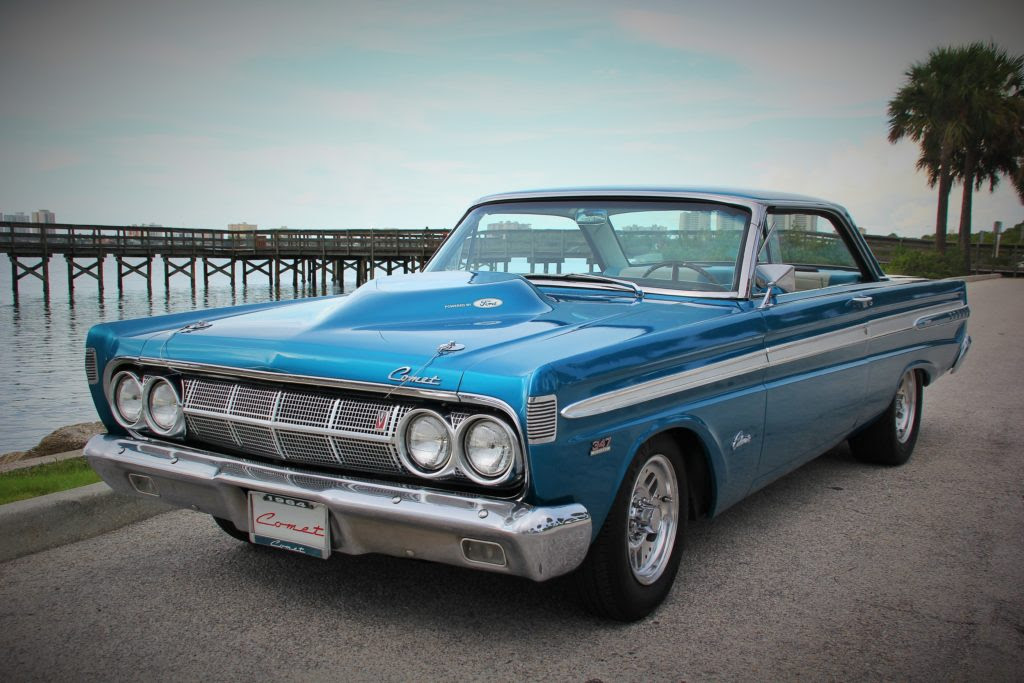 This 1964 Comet Caliente 2dr hardtop is owned by Ken Saul of Mims, Florida. He purchased it nearly 40 years ago in the Dallas area for a sum of $750. It’s not technically blue, but a 1998 Ford teal color; it gets the name from where Ken got married, in Oklahoma. His marriage was held at a preacher’s home right next door to a bar (where the reception was held) called the Blue Mule, so that’s what he named his car, as he explained with a laugh!

Ken wasn’t a rich man, so the car went into storage not long after purchase as Ken became an over-the-road truck driver. He tried saving up enough money each year to work on it, but as is always the case, his job, marriage, and life kept getting in the way. Ken finally retired in 1999 after relocating to the Space Center area in Florida. His last work was for USA shuttle logistics. All the while, the car was still in storage in Texas. Now entering into the picture was Ken’s father-in-law, who wanted to come to a Daytona 500. He told Ken he could bring the car to him, since he owned a trailer and wanted to visit and see the 500.

The car was delivered, and Ken and his good friend Jack Valerio of Port St. John started working on it. Jack was no stranger to working on cars as he had retired from Ford after 24 years. Jack was also a past National Champion of Indy (D Gas class) in 1968 with his 1955 Chevy gasser.

More @ Racing Junk
Posted by Brock Townsend at Saturday, September 17, 2016 No comments: Links to this post

What The Media Is Not Telling YOU About The Muslim In New York Who Hacked An Officer With A Cleaver. Read His Own Confession To Become A Muslim Jihadi Martyr

What no media has revealed regarding this ‘crescent sword Jihadi’ should stun Americans regarding the type of migrants coming in. He was Palestinian, a migrant from Syria named Akram Joudeh. His Facebook page reveals his death wish “via martyrdom.” What the media told us is only part of the story. This scruffy-bearded Akram posted an image of crescent shaped cleavers. He ran with his cleaver towards Sixth Avenue in New York; when a stun gun did no effect, he continued slashing an officer in the head, then the police shot him 18 times as he refused to drop the huge slicing dagger while lunging at cops. He even posted on his timeline a photo of two crescent cleavers.

Trump: “People who warn about radical Islamic terrorism are not Islamophobes”

Trump is challenging the sacred dogmas of the political and media elites in a way no candidate has in decades. That is why he so frightens and enrages them.

“Trump says Clinton’s bodyguards should ‘disarm immediately’ and ‘see what happens to her,'” by Sean Sullivan and Jenna Johnson, Washington Post, September 17, 2016:


…At the rally, Trump took on other criticisms he has faced for using anti-Muslim, anti-immigrant rhetoric. He said that when Democrats “are in trouble they always pull out the ‘racist’ word.” He said that “people who warn about radical Islamic terrorism are not Islamophobes.”

More @ Jihad Watch
Posted by Brock Townsend at Saturday, September 17, 2016 No comments: Links to this post

Confessions of a Hillary Insider

I am shocked at the audacity of Hillary Clinton to decry Donald Trump as a birther because her campaign not only pushed that item in a bid to discredit Barack Obama, but mounted a sustained campaign attack Obama on a broad array of issues. How do I know? I was part of that effort and was in regular email and phone coordination with Sidney Blumenthal. Sidney was the conduit who fed damaging material to me that I subsequently posted on my blog.


More @ No Quarter
Posted by Brock Townsend at Saturday, September 17, 2016 No comments: Links to this post

Posted by Brock Townsend at Saturday, September 17, 2016 8 comments: Links to this post

Member of the Basket of Deplorables T-Shirt

The gunman, who was shot dead in an alley after shooting his way across a few blocks near 48th and Sansom streets, was carrying a rambling note that declared hatred for law enforcement, Police Commissioner Richard Ross said.

Police sources have identified the suspect as Nicholas Glenn, 25. But an exact motive remains unclear. The contents of the note found on Glenn have not been released.

More @ NBC
Posted by Brock Townsend at Saturday, September 17, 2016 No comments: Links to this post

I guess they thought it would be recognized as a joke, but I imagine it will go over badly.

Jimmy Kimmel greeted Hillary Clinton in a surgical mask Friday on The Tonight Show.
Hillary had , , , , , … pneumonia this week.


More @ The Gateway Pundit
Posted by Brock Townsend at Saturday, September 17, 2016 2 comments: Links to this post

Posted by Brock Townsend at Saturday, September 17, 2016 No comments: Links to this post

Talking about on a roll! :) 'LES DEPLORABLES!' Trump floors cheering Miami crowd as he enters to Broadway anthem and speaks in front of giant 'Les Mis' video screen art 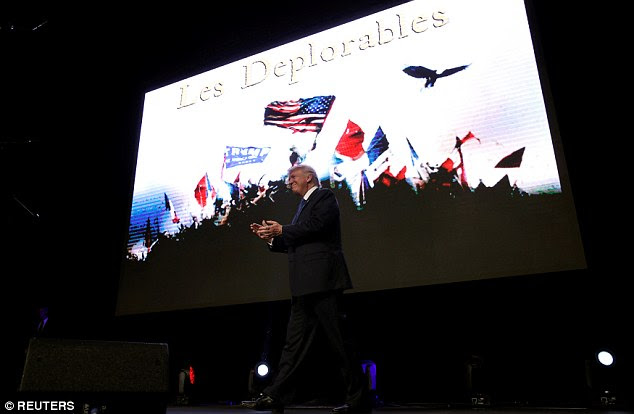 Donald Trump unveiled a new visual campaign theme in Miami on Friday – a mashup of the Broadway musical 'Les Misérables' and an epithet Hillary Clinton leveled at his supporters one week ago.

He took the stage, introduced by former New York City Mayor Rudy Giuliani, as the 'Les Mis' anthem 'Do You Hear the People Sing' blasted through loudspeakers.

The video screen behind the podium flashed to an artistic rendering of 'Les Deplorables,' complete with USA and 'Trump' flags replacing the French colors, and a bald eagle soaring over the revolutionary scene.

'Welcome to all of you deplorables!' Trump boomed as thousands screamed 'Trump! Trump! Trump!' and 'We love you!'

More with video @ Daily Mail
Posted by Brock Townsend at Saturday, September 17, 2016 No comments: Links to this post