With all the reports coming out claiming that well funded far-left activist groups intend to incite the largest riots in U.S. history in the days leading up to and during Donald Trump’s inauguration, there is good reason for well-informed Americans to be feeling a bit on edge, or a bit anxious these days.

We are living in uncertain times to say the least, and the country is heading into uncharted waters to be sure.

Until recently, there has been a lot of speculation about whether the investigations into Hillary Clinton would continue or not, but as you’re about to learn, House Oversight and Government Reform Chairman Jason Chaffetz, R-Utah, just announced that Congress is throttling forward with their investigation of Hillary & Co.

" This illustrates how sick the US left and their fake news networks have become.

I love it !!  These people are destroying themselves far faster than we could ever do through our own efforts alone.

Thus, though it is the opposite of what they hope,  the (alleged) "media" and its deranged lefty fan base are actually hastening the restoration of the United States to its former glory. Good job, Dumbocraps!" 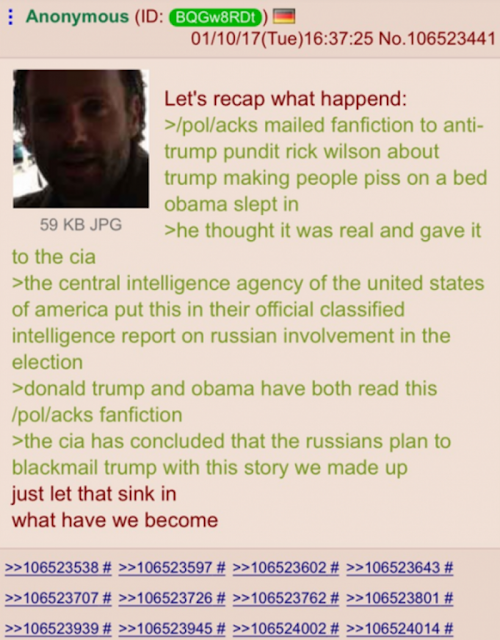 It was perfectly timed to mess with President-elect Trump’s first scheduled press conference.

The story, being referred to on Twitter as “pissgate,” involves defiling a bed once used by President Barack Obama and First Lady Michelle Obama.

Hilariously, the story is fictional, written by anonymous 4Chan message board members. Apparently, this “fanfiction” was sent to former Marco Rubio campaign insider Rick WIlson, who then forwarded it to the CIA.

The story is childish and gross.

After Rubio’s campaign failed, Rick Wilson ran Evan McMullin’s 3rd party campaign. It’s clear that his efforts were so desperate to find dirt about Donald Trump, they were willing to believe absolutely anything.

Even far-left reporter David Corn of The Nation, who saw the documents months ago, said the reporting by BuzzFeed and CNN has been entirely unfair and shameless:

And as Charles Johnson explained, the 4Chan inside-joke involving urine is about gross internet posts allegedly made by Rick Wilson’s son:

In addition, The Atlantic has confirmed Trump’s lawyer Michael Cohen has never been to Prague, despite the fake report’s claim that he was there to negotiate secret deals with Russia:

“I’m telling you emphatically that I’ve not been to Prague, I’ve never been to Czech [Republic], I’ve not been to Russia,” Cohen said. “The story is completely inaccurate, it is fake news meant to malign Mr. Trump.”

Cohen was contacted by The Atlantic’s Rosie Gray about the story, and Cohen insisted the whole story is fake news.

Cohen said that on the day that he was supposedly overseas making secret deals for Trump, he was actually visiting the University of Southern California with his son to meet with a baseball coach.

Gray found a USC source that confirmed Cohen was there during the time the documents claim he was in Prague.


BuzzFeed and CNN knew exactly what they were doing. They disregarded all journalistic standards to smear Donald Trump at any cost. For advertising revenues and increased clicks, they were willing to share a hit piece that even liberal publications passed on months ago.

And these are two outlets which have been complaining about so-called “fake news.” They just took “fake news” to the next level, using their message platform to smear people and ruin lives.

The media is corrupt and is lying to you. This is why no one trusts the mainstream media.
Posted by Brock Townsend at Thursday, January 12, 2017 No comments:

Via comment by genericviews on Rand Paul rolling out ObamaCare replacement this w...

The fight is going on now about what comes next.  Once again, the leftists in the Democratic party have moved the goal posts.  Freedom is dead.  Personal responsibility is dead.  The Free market is dead.  Long live socialism.  At this point, the Republicans are only arguing about the Sta-puft marshmallow man.

1. You cannot just repeal Obamacare.  It has tentacles into everything.   Those tentacles are not going to retract on their own.  It will need to be rooted out piece by piece.  This is an entirely unmanageable task for a congress that still never read the law they passed.

Wealth in Vietnam also flows straight to the top, for its fattest cats are senior Communists.

I last saw Vietnam in 2001. Back then, Saigon had no American fast food joints save a Kentucky Fried Chicken. Long-term foreign residents were few, and mostly confined to the Phạm Ngũ Lão area. There were no foreign stars in the just-established professional soccer league.

Now in Saigon, there are 20 KFCs, eight Burger Kings and six McDonald’s, with one across the street from where I used to live, five miles from downtown.

In December of 2007, an Afro-Brazilian soccer player, Fábio dos Santos, changed his name to Phan Văn Santos and became Vietnamese. This, in a country where millions had risked death or imprisonment trying to get out not too long before. In 2008, Santos was on Vietnam’s national team in a friendly match against, um, Brazil! Santos on his new status: