Via David "Shocked! Shocked, I say!" 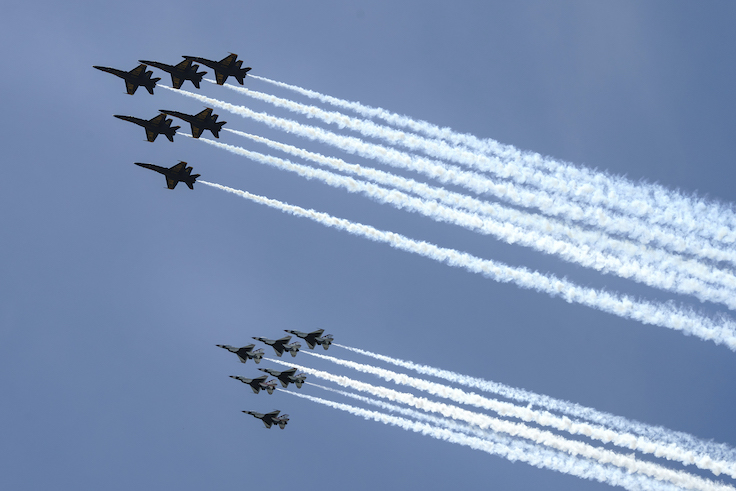 The U.S. Air Force acknowledged it changed the "norms" on how a candidate advances through its elite Special Tactics training pipeline after an anonymous service member accused the military branch of making special accommodations to advance a female trainee who failed to meet the program's rigorous physical standards.

Typically a candidate who quits the training program is reassigned to his or her previous duty, but that wasn't the case with a female candidate who was kept in the program even after repeatedly quitting and failing to meet its physical standards, according to a memo published anonymously Wednesday morning and obtained by the Washington Free Beacon. Advancing a candidate who quit the program violated the Special Tactics community's "societal norms," the memo states. I can't believe this is even in question! The SCOTUS is seriously considering whether or not our bodies are government property?

According to the latest reports, the group has recently filed an amicus brief in the ongoing SCOTUS hearing to decide the validity of Biden’s vaccine mandate.

One of the main points the brief touches on is that these shots do not prevent the spread of the virus, and because of this they cannot be rightly called vaccines.

Therapeutics is more of the word, but vaccine just doesn’t even come close to describing what is going on here.

AND NOW...the story behind the photo...

Jat53nuaryo 20, 2n201sg24
AND NOW...the story behind the photo...
The Lee-Jackson weekend in Lexington was an incredible experience for all who attended, above and beyond all expectations. We are working on an extensive report, but wanted to share a bit more about this photo, which has quickly become one our all-time favorites.
We had planned this long before we heard of the restrictions put in place by VMI this year. The fact that the parade was not ending on their grounds meant a quick change of plans, so that we put the word out to gather AFTER the service at the LEE Chapel.
Immediately following the service, we trudged up the hill to the parade grounds at VMI, and gathered in front of the Jackson statue, at the Jackson arch. Unlike previous years, there were several groups of Keydets drilling around the grounds. As we unfurled the 22 x 30 flag, and positioned it for a photo, we noticed the units had stopped drilling to watch. After several quiet moments, we began to sing Dixie. In years past, the echo of the song off of the high building was enough to send goose bumps up and down all who gathered, but NOTHING prepared us for what happened next...
...as we sang, many Keydets joined in. Dixie's Land bounced off of the buildings and echoed loud and strong, and when we finished, we turned to find that many of the windows had been opened and Keydets were gathered. They added their voices to a Rebel Yell at the close of the song that was extended and loud enough that it was certainly heard by Jackson himself in the heavens. Shortly after that, a Confederate Battle Flag appeared from one of the windows.
We were honored to be a part of this moment of remembering Jackson on the grounds that he knew so well, and pleased to find that despite what appears to be attempts by the administration to remove the proud legacy that Jackson and the Confederacy have bestowed on the school, the student body still has a healthy respect and admiration for the man who made the ultimate sacrifice in defense of Virginia.
GOD BLESS GEN. JACKSON, AND GOD BLESS THE BOYS OF THE INSTITUTE!
Posted by Brock Townsend at Sunday, January 09, 2022 6 comments: Animal kingdom offers the greatest, yet the most unusual friendships, but nothing beats this incredible bond between a Golden Retriever and a wild deer. Best friends for over a decade, these two very unlikely companions perfectly show what animal world is all about. Everyone meet G-Bro, the gentlest golden retriever, and his very best friend Buttons, a rescued deer!

Posted by Brock Townsend at Sunday, January 09, 2022 No comments:

Native Phenom Who Dazzled the World

Jim Thorpe. Most of the world has heard his name. Many know that he was one of the greatest athletes that ever lived, many say “THE greatest.” Fewer know that he was Native and born on a reservation and became the first American Indian to win Olympic Gold Medals.

Fewer still know the amazing back story of Jim Thorpe, a man who defied grinding poverty, hardship, and overwhelming odds to become a World Champion. Only 30 years after the last Indian had been exiled to reservations in America, in 1912, Jim Thorpe mesmerized the world at the Stockholm Olympics and won the two most difficult Olympic events that would define him as the world’s greatest all-around athlete: The Decathlon (10 sports) and the Pentathlon (5 sports). But the truth behind the man makes his feat even more heroic.

More @ Notes From The Frontier

Posted by Brock Townsend at Sunday, January 09, 2022 No comments:

Bill Filed In Washington (state) Would Authorize ‘Strike Force’ To ‘Involuntarily Detain’ Unvaccinated Families: ‘They Have Already Set Up The Internment Camps’ The Washington State Legislature is slated to vote on a measure that will authorize the involuntary detainment of residents as young as 5 years old in “Covid-19 concentration camps, for failing to comply with the state’s experimental vaccine mandate.

If passed, WAC 246-100 will allow local health officers at “his other sole discretion” to “issue an emergency detention order causing a person or group of persons to be immediately detained for purposes of isolation or quarantine.”