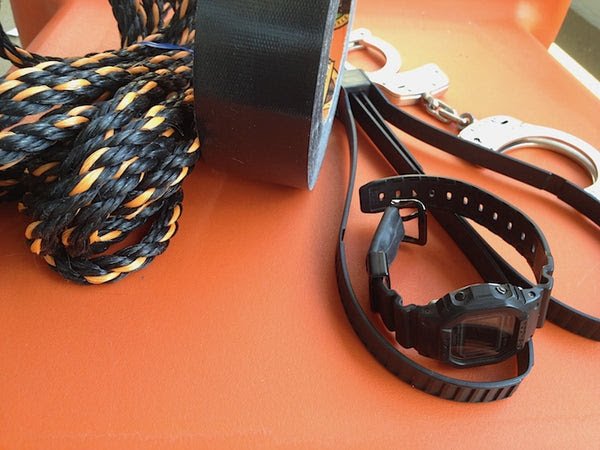 The Anti-Kidnapping Band is designed to allow you to carry escape tools in your watch band. It's a wearable insurance policy for military personnel, foreign aid workers, and journalists in conflict zones, as well as for travelers in countries with a high risk of kidnapping for ransom.

The A-K Band is currently sold out - A huge thanks to SSD, Dude, and Gizmodo for their coverage.

The next batch of A-K Bands will be available in a week. If you would like to reserve one, please email mark@gearward.com

The A-K Band allows the wearer to escape from rope, duct tape, zip ties, and handcuffs.


More with pictures and video @ Gearward
Posted by Brock Townsend at Tuesday, May 20, 2014 No comments:

NC: Snipers from around the globe muster for Fort Bragg tourney

Sniper teams from around the globe converged on the Special Forces Sniper Course to put their skills to the test in this year’s United States Army Special Operations Command International Sniper Competition.Twenty-two teams, including three foreign teams, competed for one year of bragging rights to say they are the best in their business. Each team in the competition was comprised of one shooter and a spotter.

Michelle Obama To High-School Grads: Monitor Your Parents For Thoughtcrime

There can be no aspect of your daily life that’s removed from politics. Now you will be monitored by your own children for expressing unapproved opinions. You’d better watch what you say at the dinner table, Mom and Dad.


First lady Michelle Obama is encouraging students to monitor their older relatives, friends and co-workers for any racially insensitive comments they might make, and to challenge those comments whenever they’re made.


Parents in Oklahoma City are horrified after a 10-year-old girl claims she was raped in a school bathroom by a brother-sister duo.

According to KFOR-TV, the girl’s mother says she was waiting in the pickup line for her daughter after school recently when the child came running out crying and shaking.

“She came out with her knees and hands shaking and crying,” the mortified mother told the station. “I jumped out of the car and asked her what was wrong and she said ‘Mama, they touched me down there.’”

The 10-year-old said she had gone to the restroom, and that’s when a female classmate of hers and the classmate’s brother began their assault.

The Constitutional Militia. The Paramilitary, and PATCON

First paragraph from The Dick Act of 1903

Be it enacted by the Senate and House of Representatives of the United States of America in Congress assembled, That the militia shall consist of every able-bodied male citizen of the respective States, Territories, and the District of Columbia, and every able-bodied male of foreign birth who has declared his intention to become a citizen, who is more than eighteen and less than forty-five years of age, and shall be divided into two classes—the organized militia, to be known as the National Guard of the State, Territory, or District of Columbia, or by such other designations as may be given them by the laws of the respective States or Territories, and the remainder to be known as the Reserve Militia.

Any questions as to whether the Citizen’s Militia is authorized?

My first encounter with “The Militia”, was about 20 odd years ago.


More @ Mason Dixon Tactical
Posted by Brock Townsend at Tuesday, May 20, 2014 No comments:

Horace Mann received much support in his endeavor to kill the influence of Christian education from people like Robert Owen, the British socialist who came to this country and founded the socialist colony at New Harmony, Indiana in the late 1820s. Owen was the man whose socialist scheme in Indiana "lighted up (Abraham) Lincoln's heart" according to Lincoln's biographer, Carl Sandburg, himself a socialist.

So the foundation of public education in this country was clearly anti-Christian--and if that was the case in the beginning, then how, pray tell, do you get it back to the "good old days?" There never were any "good old days" in public education. All there were, if you perceive events correctly, were times years ago when the anti-Christianity and socialism were a little less evident than now, but they were still there. If the root of the tree is rotten, you can't improve it by lopping off a few small branches and labeling it "school reform." Unfortunately, most Christians in the last 160 years have never figured that out.

After the public school system had operated in Yankeeland for about thirty years, one generation, along came the War of Northern Aggression.  When the shooting part of that war was over, then what is euphemistically called "reconstruction" was instituted, starting in the South--and guess what came South with the Carpetbaggers? You got it--the public school system, complete with Yankee school teachers and textbooks, all designed to show the benighted South the path of true salvation--not through Jesus, but through the State.


More @ The Copperhead
Posted by Brock Townsend at Tuesday, May 20, 2014 No comments:

While calling a Krebs Custom Vepr RPK an “AK” is technically accurate, I’m pretty sure that few would consider the $1,799 rifle equipped with a $359 scope to be a fair approximation of an average AKM.

MAC takes this very nice custom rifle out to 500 yards, which is pushing the limits of the 7.62×39 intermediate cartridge, a round most typically used inside 200 yards.

We’ll be building our own AK with Rifle Dynamics in just a couple of weeks when they come to Jacksonville, NC. Considering Jim Fuller’s reputation as one of the nation’s most knowledgeable AK gurus, I’m hoping that rifle will be every bit as accurate as this one in Tim Harmsen’s capable hands.

The Quiet Sesquicentennial of the War Between The States

Not much media coverage, not much fanfare, not much reflection.  A war that carved over 600,000 lives from the nation when the nation’s population was just 31 million.  To compare, that would equate to a loss of life in today’s population statistics, not to mention limb and injury, of circa 6 million.

We are in the month of May, when 150 years ago Grant crossed the Rapidan to engage Robert E. Lee's Army of Northern Virginia.  Lee stood atop Clark’s Mountain and watched this unknown (to the eastern theatre) entity lead a massive army into Lee’s home state.  Soon there would be the Wilderness, where forest and brushfires would consume the wounded and dying.  Days later, the battle of Spotsylvania ensued, in which hand-to-hand combat would last nearly 12 hours.  Trading casualties one for one and rejecting previous prisoner exchange and parole procedures, Grant pushed on, to the left flank.  The Battle of the North Anna, then the crossing of the James, and thus into the siege of Petersburg.  This was 1864 in the eastern theatre.

Today there is hardly a whisper of the anniversary of these deeds, sacrifices, and destruction.

More @ American Thinker
Posted by Brock Townsend at Tuesday, May 20, 2014 No comments:


Aldine ISD police say a 16-year-old student at Nimitz High School was so upset with his substitute teacher for taking his phone, he pushed her onto the ground.

The video shows the student, who's described as 6 foot 3 and 325 lbs., standing up and pushing the teacher three times and on the third time the 66-year-old woman fell to the ground.

Police say the teenager was using his phone in class and got physical with the substitute teacher to get it back.

The student actually walked himself to the principal's office to turn himself in. He was charged with injury to the elderly. His name isn't being released because he is a minor.

With the same scenario/results as last time I imagine.

Earlier today, Putin did his usual "we are pulling our forces away from the Ukraine border" gambit (sure he is... and is replacing them with a massive airforce drill), and as usual the algos fell for it, after European stocks suddenly surged out of nowhere on the now quite generic bounce catalyst (Update: RASMUSSEN: NO SIGN OF RUSSIAN TROOP PULLBACK FROM NEAR UKRAINE - what a surprise), but what is shaping up as a far more dangerous escalation is what China is doing next to its border with Vietnam, where as reported previously protesters destroyed Chinese factories and killed Chinese civilians in retaliation over yet another maritime territorial spat.

According to the Epoch Times, "troops, tanks, trucks, artillery, and armored personnel carriers of China’s military were seen heading to the Vietnamese border on May 16 and 17, according to photographs taken by by residents near the border."