Atlas, The Next Generation

Posted by Brock Townsend at Saturday, February 27, 2016 8 comments: Links to this post


You probably had no idea, but representatives from Silicon Valley, Hollywood and the U.S. government came together earlier this week to privately discuss how they could jointly fight ISIS propaganda online. Never mind the fact that ISIS is the child of reckless and inhumane preemptive wars of aggression perpetrated by the U.S. government. Such introspection naturally never crosses the mind of government bureaucrats ostensibly attempting to understand the epic disasters they created in the first place.

So who attended the meeting? We don’t know for sure because the plebes aren’t entitled to know such things. Fortunately, we have become privy to some information thanks to Buzzfeed News. Here’s what we learned:

Sheriff Joe: Vicente Fox Should Be Swearing at the Dope Peddlers and Illegals – Not Trump

“If he’s gonna use that word he should use it against all the dope peddlers and illegals coming into our country… At least he said one thing, they’re not going to pay for the wall, but he didn’t say there shouldn’t be a wall. If they don’t want to pay for it then take away a little foreign aid that we pay Mexico.”


More with video @ The Gateway Pundit
Posted by Brock Townsend at Saturday, February 27, 2016 2 comments: Links to this post

As the Apple vs. FBI battle rages in the court system and throughout the halls of Congress, Obama decides to do what he does best. Using “his pen” to make consequential decisions unilaterally.

Just another day in the American banana republic.

Johnny Carson Asked The Audience If Anyone Played Piano. This Guy Raised His Hand, And His Life Forever Changed


On December 19, 1985, David Tolley was just another guy in the Tonight Show studio audience when Johnny Carson said, "Horatio Gutierrez (a classical pianist) couldn't come tonight because he accidentally shut his hand in a car door and didn't want to chance playing the Tonight Show. Can anybody here play the piano?"

David volunteered; he played "Memory" (from the Cats musical). The next day, David got tons of phone calls - everything from playing on cruise ships to acting in movies.

You just never know what life is going to bring your way.

Had enough? Had more than you can stand? 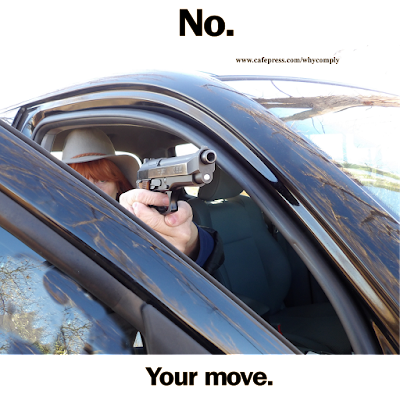 Tired of being pushed into a corner? Let them know to back off with these message items.

@ Why Comply
Posted by Brock Townsend at Saturday, February 27, 2016 2 comments: Links to this post

More than 120 people were arrested as part of a major crime initiative in Robeson County, the U.S. Marshals Service announced Friday.

The U.S. Marshals Service said 37 high risk searches were conducted as part of the initiative.

“We were going after the worst of the worst,” said Scott Parker with the U.S. Marshals Service. “We arrested people for murder, accessory to murder.”

Others were arrested for child sex offenses, cocaine distribution, attempted rape, among other offenses.

I would have been the first one to give you the benefit of the doubt. I was raised around law enforcement. I know good men in law enforcement. But that changed for me, as it did thousands of Americans, with the events that unfurled in Oregon as I felt utterly stunned at what I viewed in that video.

I watched the grainy version of the video that the FBI administration released of  LaVoy Finicums death, even though I knew that with our technology today,  they have better, more clear footage and footage with audio from this event. But you will not release that, it is too incriminating for the FBI.  They did this with purpose to deceive the public and that video would have revealed to the world your actions that day . This footage you did release, left people arguing about what they were seeing in the blurry video rather than  to bring their attention to the way that three FBI agents ambushed and murdered an innocent, non-violent rancher with no criminal history. A man with a large family. A good man. A man who never threatened you.

The FBI had clearly set this up in advance with stops prepared and dozens of agents ready to end the protest because four weeks of a land rights issues protest was all the patience they could muster. The protesters had left the ranch many times before and on this day we’re headed for a meeting to inform ranchers of their rights. You knew that.  You stopped the two cars and started shooting at LaVoy’s truck full of passengers- unprovoked. They never brandished a weapon against you.

Finicum  told you he was driving to the Sheriffs office for protection from you. The only place he felt safe.  You fired on his vehicle. You could have just followed him if you had ever intended to have a peaceful outcome. But that was never your intention. Finicum knew why the local law enforcement wasn’t invited to this event- why the local Sheriff was intentionally kept at bay-  Finicum feared  what you would do to him with no local oversight. The Sheriff of Grant County, just over the county line where you ambushed him, valued  Constitutional rights and Finicum knew the Sheriff  would never approve of an ambush on the highway and and execution of a protester.

A tax-paying citizen who loved America could not trust you and fled for his life because he knew you could murder him and get away with it. Let that sink in.

When Finicum got out of his vehicle with his hands up, within seconds you gathered around him and shot him in the back.

You shot him him in the back.

Who would carry out such a cowardly deed? Who would follow orders to shoot a rancher with his hands up and shoot him in the back seconds after getting out of his vehicle? The three of you would do this. What were you thinking? How do you reconcile this in your head and in your heart?

No talking? Not one attempt at a peaceful negotiation? At the refuge all he did was talk to you, never threatened you. His hands were UP. Did your conscience allow you to shoot him  without any reservation? After his lifeless body dropped into the snow, you cared so little for this fellow citizen that you walked around his body and didn’t check for a pulse for 15 minutes? Why? Because of your guilt or because you had such little regard for him or for human life in general? Both of those answers are equally terrifying to me.

Moments later you  shot rounds of ammunition into Finicum’s truck with scared women inside screaming for help- trying to surrender.  You threw gas cans inside the vehicle.  Is this how you do it now? Are you sincerely okay with this? Look at what you have become.  By a miracle they survived.

Before you hunted him down and silenced him like wild game, Finicum carried out two heroic acts. As he turned the blind corner on the highway, he almost ran into your barricade head on, as vehicles and men stood standing in the middle of the highway at your “stop”. He veered to the left on the snowbank to avoid hitting you. To preserve your lives.  He then got out of the vehicle with his hands up to divert your attention from his truck with passengers inside, so you would stop firing upon them. To preserve their lives. This is the man you surrounded and killed within seconds. You killed a hero.

I wonder what has happened to my America where you could easily tell the good guys from the bad guys. Are you mercenaries now? Carrying out executions on demand? Have you realized yet that you did the bidding of a government that is seeking to violate the property rights and steal the land of your fellow citizens? Do you realize that you are a citizen and that these ranchers were standing up for YOUR rights, too? Or have you not realized this.

Most Americans won’t take the time to do the research to find out that you shot him in the back before he ever reached for his stomach – the area where you shot him. And your bosses instructed the media to tell everyone he reached for a gun to justify this cowardly act of murder on a fellow citizen. What a pathetic cover-up for your actions that day.

I’m asking all three of you who carried out the execution of Finicum, to RESIGN.

We need men with a conscience and a soul  in law enforcement.

We need good men who are there to protect the citizens rights. Your fellow men.

You took an oath to defend the Constitution. Did you understand this oath when you excitedly repeated its words to get your badge? It wasn’t a promise. It was an oath. An oath to protect and to serve- us. LaVoy was one of US.

Millions of  people have died as a result of those ” just doing their job”. Under Hitler. Under Stalin. Is this who you have become? Shooting someone with their hands up because you were told to?

Let me ask you this. In all of your years in the FBI, how many ranchers have ever threatened you or have drawn weapons on you? I’m guessing the thugs you deal with everyday do not include ranchers and farmers.

How many ranchers over the years have left their working farms, to protest over the stealing of another ranchers land and imprisonment? I’m guessing probably none.

Here’s the difficult question. After decades of government abuse to rancher’s property rights, how many ranchers have YOU defended, or aided, or stood for- because you did take an oath to defend the Constitutional rights of those in your care. I am going to guess that you have never stood for any of these men against the abuse of the government. You have become pawns. You are protecting the governments special interests, not the people’s.

Resign, so I can sleep at night with some of my faith in America  restored.

Resign, so I can tell my kids to respect the FBI.

Resign, because I need to know there are not monsters out there with guns and badges that will do anything they are told to do, like killing innocent Americans, because we could be next.

You may be a fellow citizen, but you are not my fellow American.

Posted by Brock Townsend at Saturday, February 27, 2016 10 comments: Links to this post