Family forced from minivan, brought to knees, held at gunpoint after museum outing

A family outing to an airplane museum turned into a horrific nightmare as young children watched their mother and grandmother yanked out of their minivan and forced to their knees at gunpoint.

The Hill family of Columbus had just spent a day at the National Museum of the U.S. Air Force located at Wright Patterson Air Force Base.  The group consisted of Alice Hill, 65, her daughter-in-law Wendy Hill, and her two grandchildren Aaron, 8, and Brooke, 5.  The kids were on Spring Break and they had taken a short road trip.

As they wrapped up their excursion of showing the children airplanes, the family headed back to their minivan.  But young Aaron had never seen so many out-of-state license plates before.  He wanted to walk around and look at the different designs.  So the excited boy and his grandma walked around the parking lot to check out the cars.

They finished up without incident, hopped in the family minivan, and headed home.  They were just outside the base when they were pulled over by “security forces.” 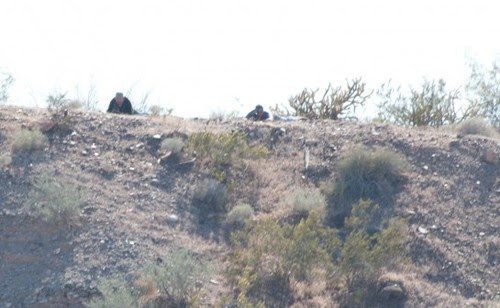 The primary discussion topic will be about the Bundy Ranch situation. Of course any other side topics that people might wish to discuss, are also welcomed.


Streaming link will be available on this page after the chat goes live. The Google Hangout Stream via YouTube only allows for 8 hours of air time in total.

Therefore, the stream might not begin exactly at 8PM, and might not end exactly at the end of the conference call. For call-in instructions, see below:

This is a Facebook Page for PEACEFUL and CIVIL Group Conversation about current events. This is an audio forum. We are not a news station. We're not a group or a cause. We're not a movement.

We are not here to tell you what is or is not the truth, about anything. We're simply here to let you speak your mind.

The rules are simple:

04) Profanity is discouraged, but not prohibited.

We are still working on dates and times, we're playing it by ear for now. Calls are syndicated via YouTube on a Google Hangout, by way of an incredibly half-assed and shitty Skype jimmy-rig. So please excuse any audio difficulties. A more reliable method of streaming the audio into YouTube is being researched. Thank you for your patience.

Our thanks to the Druids for all those goats. It was a huge help!
Posted by Brock Townsend at Sunday, April 13, 2014 No comments: Links to this post 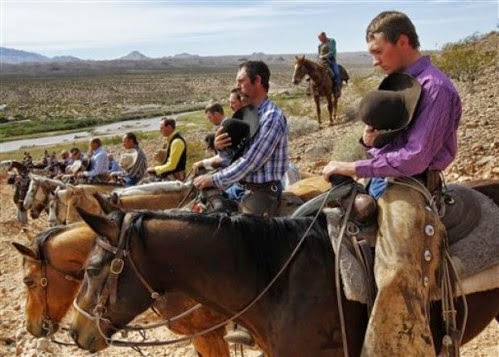 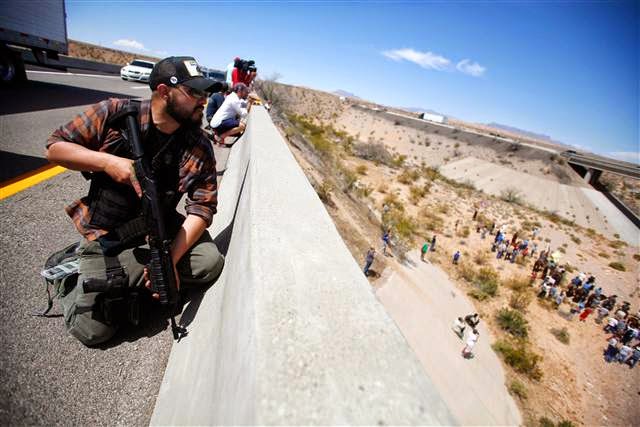 Posted by Brock Townsend at Sunday, April 13, 2014 No comments: Links to this post

Posted by Brock Townsend at Sunday, April 13, 2014 No comments: Links to this post

BLM: Do Not Spay Wild Mares

The Bureau of Land Management's latest plan for wild horses is to scoop stallions into a backhoe, perform a vasectomy in the dusty open air of the range, then dump the animals out to recover from surgery in the wild. For the mares, a similar plan but this one involves inserting a tool 2 foot long tool with a noose on the end into the mare’s vagina and plucking her ovaries out one by one.

Unbelievably, these methods being advocated by Dr. Boyd Spratling, a large animal veterinarian whose role should be ensuring the care and humane treatment of animals.

Dr. Boyd Spratling, concurrently serves on an committee for the Nevada Cattleman’s Association, the board of the Nevada Dept of Agriculture, and on the Bureau of Land Management Wild Horse and Burro Advisory Board.

Does that seem like a conflict of interest to you?

Fed Retreat was Psyop (Worth the five minutes)

Posted by Brock Townsend at Sunday, April 13, 2014 4 comments: Links to this post

Real Americans Are Ready To Snap

Despite popular belief, every culture of every nation draws a line in the sand against government tyranny. The problem is, many draw this line so close to total defeat that it rarely matters. For the Jews of the Warsaw Ghetto, for instance, it wasn't until the Germans had already herded millions onto railroad cars destined for death camps and cornered the rest into dilapidated central housing that the ZOB resistance was formed, only to be wiped out a month later. Perhaps hindsight is 20/20, but clearly too many freedom movements throughout history waited too long to respond to the trespasses of oligarchs.

The Founding Fathers frequently struggled with the proper measure of resistance. Many colonials wanted vengeance on the British after the Boston Massacre in March of 1770, but patriots knew that the timing was not right. The battle to rally citizens to the cause and to educate the masses as much as possible on the facts took precedence over the desire to enter conflict. The Founders endured five more years of British government criminality until nearly 80 farmers and militiamen stood outnumbered on Lexington Green on April 19th, 1775 to confront an army of 700 British regulars on a mission to capture rebel leaders and destroy weapons caches. No one knew at the time that the war would be sparked that day, but everyone knew that a fight was inevitable and near.

I believe the same feeling hangs in the air of modern America for REAL Americans, and by “real”, I mean those who actually support and defend the constitutional values and principles that lay at the foundation of our society. We sense that something is coming; a great change, or an unstoppable reckoning.

The question of when to strike back is pivotal to any resistance movement.

A prominent scientist and former NASA researcher has added his voice to those who challenge the "scientific fact" that manmade carbon emissions are causing global warming.

Dr. Leslie Woodcock is a professor emeritus of chemical thermodynamics at the University of Manchester in England, with a Ph.D. from the University of London, and served as a senior research consultant at the Wright-Patterson Air Force Laboratory in Ohio.

In an interview with Britain's Yorkshire Evening Post, Woodcock declared: "The theory of 'manmade climate change' is an unsubstantiated hypothesis.

"The theory is that CO2 emitted by burning fossil fuel causes 'global warming.' In fact, water is a much more powerful greenhouse gas and there is 20 times more of it in our atmosphere [than carbon dioxide].

"Carbon dioxide has been made out to be some kind of toxic gas but the truth is it's the gas of life. We breathe it out, plants breathe it in. The green lobby has created a do-good industry and it becomes a way of life, like a religion. I understand why people defend it when they have spent so long believing in it."

Woodcock is also a Fellow of the Royal Society of Chemistry, a founding editor of the journal Molecular Simulation, a recipient of a Max Planck Society Visiting Fellowship, and a former guest scientist at the U.S. National Institute of Standards and Technology.

He went on to say: "If you talk to real scientists who have no political interest, they will tell you there is nothing in global warming. It's an industry which creates vast amounts of money for some people.


"The temperature of the earth has been going up and down for millions of years. If there are extremes, it's nothing to do with carbon dioxide in the atmosphere, it's not permanent and it's not caused by us. Global warming is nonsense.

"It's become almost an industry, as a consequence of this professional misconduct by government advisers around the world."

But he added: "You can't blame ordinary people with little or no science education for wanting to be seen to be good citizens who care about their grandchildren's future and the environment."
Posted by Brock Townsend at Sunday, April 13, 2014 6 comments: Links to this post

Do Federal Regulations Violate the Constitution?

@ Constitution Mythbuster
Posted by Brock Townsend at Sunday, April 13, 2014 No comments: Links to this post

Why The Feds Chickened Out On A Nevada Ranch Let me obliterate a bit of confusion here: the Obama administration attempted to go to war with a rancher in Nevada. Let me amplify a little bit of truth: They tucked tail and have returned home. And let me add a bit of clarity: they had no choice!

As the nation began to become familiar with the plight of the family of Cliven Bundy, many of us harkened back to another standoff in which the Federal government attempted to bully it's outcome: Waco, Texas and the Branch Davidian massacre.


More @ Townhall
Posted by Brock Townsend at Sunday, April 13, 2014 No comments: Links to this post

The only realistic option is for the government of Connecticut to pretend that their assault weapon ban never existed. To admit it exists, and that they can do nothing to enforce it, would reveal that the emperor and his court have no clothes.

Posted by Brock Townsend at Sunday, April 13, 2014 8 comments: Links to this post

Two shots of the Bundy Revolution 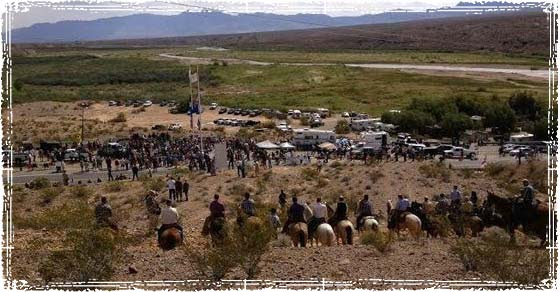 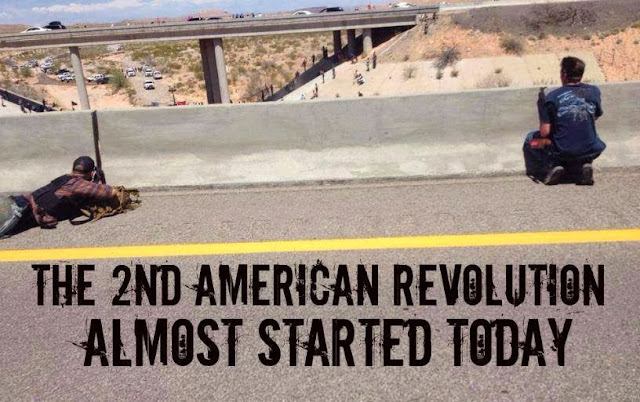 Posted by Brock Townsend at Sunday, April 13, 2014 2 comments: Links to this post