President Trump: “This has been long in the making.”

“It’s a big deal,” the President said from the Oval Office. “The bill directs the National Science Foundation to work with other federal agencies to expand veteran eligibility for STEM-related programs and encourages veteran participation in these critical fields.”

The Trump Administration has made caring for our brave veterans a top priority:

America’s vets are our top priority, and it will stay thatway!
Posted by Brock Townsend at Wednesday, February 12, 2020 2 comments: 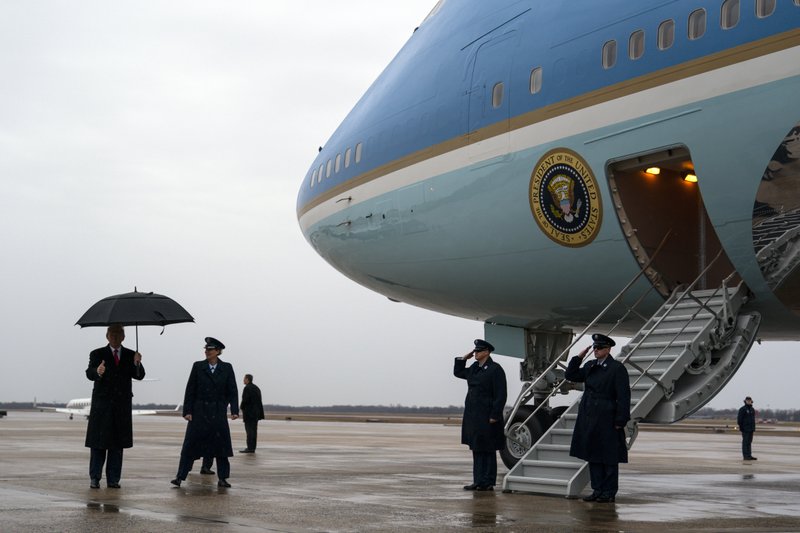 President Donald Trump is proposing a $900 million increase in education spending to teach skills and trades, in what would be a historic federal infusion into a spending area that’s been stagnant for years.

The announcement Monday follows Trump’s State of the Union push for career and technical education and is in line with increasing emphasis on the idea that there should be stronger career paths for students as alternatives to a four-year degree.

“It’s maybe the largest investment in CTE ever,” Education Secretary Betsy DeVos said during a briefing to education groups after the administration released its budget proposal.


The man who bought the VA legislature to ban guns will be here on Thursday, Feb 13 2020.

The latest location is: 304 E. Market St. in Greensboro at a restaurant called the Cadillac service garage.

He’s now playing a shell game with the location of his socialist soiree, having changed it 3 times in the past few hours.

We will have people at the other locations – no matter how many he has – to direct you to the latest that should only be a short distance away.
Our Protest event will take place from 8:15 am - 10:30 am on the sidewalk. We need EVERYONE we can muster to protest his nanny-statism.
Take time off from work if you have to
More @ GRNC
Posted by Brock Townsend at Wednesday, February 12, 2020 2 comments:

The Democrats and the legacy media continue to propagate the false narrative that the firing of the Vindman twins – and now the projected reassignment of at least 70 other staffers – from the National Security Council is either witness retaliation, retribution, part of the “ongoing cover-up,” or just “pure cussed orneriness” on the part of the President in the aftermath of his acquittal-for-life. Here’s an example from Senate Minority Leader Chuck Schumer:

College Made Me a Conservative & Thomas Sowell 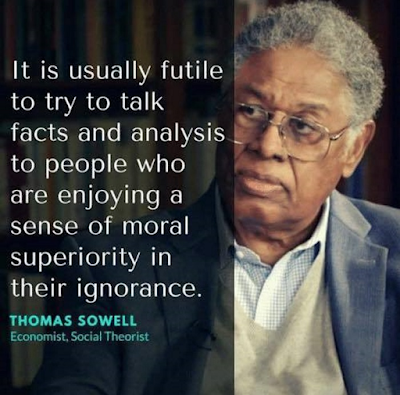 Hey Joe Biden! You just tanked in the Iowa caucuses and your approval in New Hampshire is in free fall, with a couple of polls out this weekend showing you in fifth place. What are you going to do to right the ship? Oh, you’re going to talk about the Second Amendment? Yeah, that should work.

Van Jones: Let's Be Real, None of These Democrats Can Beat Trump 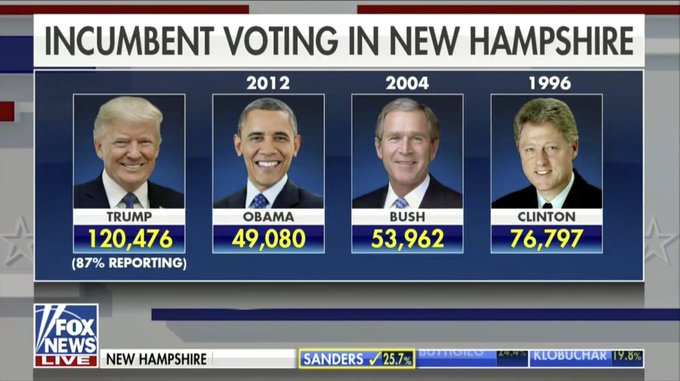 It's been less than 24-hours since former Democrat frontrunner Joe Biden placed fifth in the New Hampshire primary, producing panic among the "moderates" in the Party that his candidacy might be over.

“This is horrendous. We’re all scared,” said a Biden adviser, speaking anonymously because the comments conflict with the brave public face the campaign is trying to broadcast. “I think we’re going to make it to South Carolina. I know we’re supposed to say we’re going to and we’re going to win. But I just don’t know.”

Chuck Schumer: Dems Will Be ‘Strongly United’ Behind Nominee, Even If They’re A Socialist 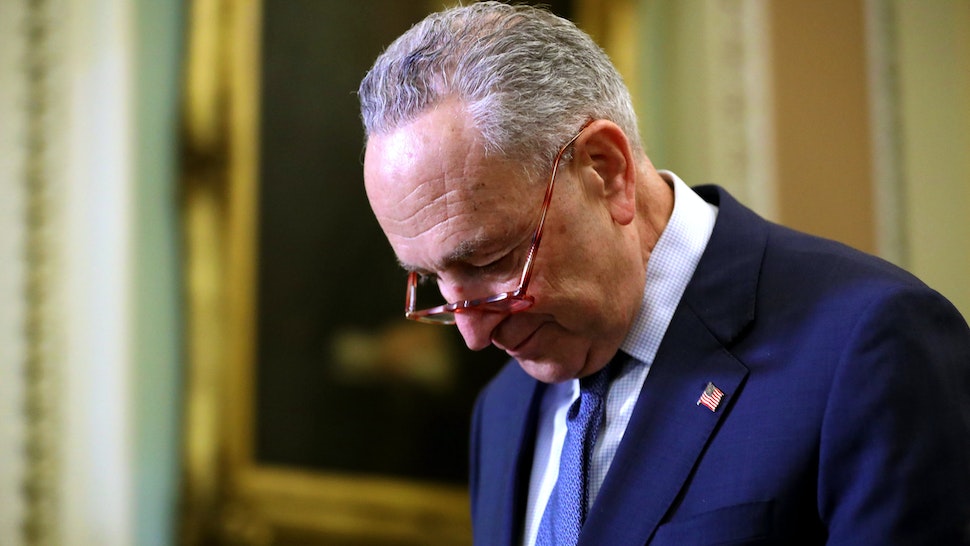 Sen. Chuck Schumer (D-NY) reminded Democrats on Tuesday that the party would be united behind the eventual nominee, even if that nominee happens to be a socialist.

In a joint press conference with Speaker of the House Nancy Pelosi (D-CA), Schumer rebuffed questions over whether the party will fracture if Sen. Bernie Sanders (I-VT), a “Democratic socialist” is named the party’s presidential nominee, leaving some Democrats — including, perhaps, Schumer — out in the cold.

Posted by Brock Townsend at Wednesday, February 12, 2020 No comments:

The Tariff Road to Civil War

1860 Election Poster. “The only Issue before the Voters is the Protective Tariff.” Presented a flawed sectionalist economic appeal.

Most Americans believe that the U.S. “Civil War” was just about slavery. They have to an enormous degree been misinformed.  Since the early 1960s, powerful academic and political interests have been straining every nerve to sustain the myth that the war was a glorious moral crusade against slavery.

How to handle the multi-faceted problem of slavery was often a divisive issue but not in the overly-simplified moral sense that lives in postwar and modern propaganda. Had there been no Morrill Tariff, the major cotton-exporting states would not have been so strongly compelled to secede, and there might never have been a war. Recent scholarship now estimates that the total of military deaths during the Civil War was over 750,000 and that

130,000 civilian deaths, including 80,000 displaced Southern slaves who died of malnutrition and disease following Emancipation and the collapse of the Southern economy, brought the total loss of lives to over 880,000. In addition, over 40 percent of Southern property was destroyed, and many millions were impoverished for generations. Without the Morrill Tariff, this terrible bloodshed and calamity might never have been.

Two days before Lincoln’s election in November of 1860, the Charleston Mercury editorialized:

Grandma Says Shutup And Take My Money! 😂 I'm Rich and You Need Gas

Another Head Bounces Down the Steps at Department of Justice

There was an unexpected postscipt to the saga of the Roger Stone sentencing recommendation.

What started off as a petty and vindictive effort by three members of the Mueller team to embarrass Attorney Bill Barr and their own boss by handing what would basically be a life sentence to Stone ended up in all four prosecutors resigning from the case–one resigned from the Justice Department–and the Department of Justice delivering a scathing repudiation of the original sentencing recommendation to the court. Now the body count has increased by one. Former US Attorney for the District of Columbia Jessie Liu.

Liu had worked in Justice during the Bush administration and became a member of Trump’s transition team and was appointed US Attorney for the District of Columbia. Last year, Bill Barr tried to promote her to the Number Three slot in justice, but that plan ran into a buzzsaw named Mike Lee.

As it turned out, Liu was a pro-abort and she had opposed the confirmation of Samuel Alito (READ: Mike Lee and William Barr Get in a Shouting Match as Justice Nominee Is Blocked for Not Being Conservative).