A beloved University of Missouri professor resigned after he refused to cancel a school exam during the hunger strike and athlete’s boycott.

Dr. Dale Brigham, considered one of the most beloved professors at the University of Missouri, has resigned after refusing to cancel an exam for students who claimed to feel “unsafe.”

“If you don’t feel safe coming to class, then don’t come to class,” Dr. Brigham told his students. “I will be there, and there will be an exam administered in our class,” he continued, imploring his students to stand up to the bullies on campus. “If you give into bullies, they win. The only way bullies are defeated is by standing up to them.”

If Southerners Had Behaved Themselves . . .

One of the myths of the Northern invasion of the American South is that Sherman did not wreak the destruction on North Carolina as he and his vandals had in South Carolina. Homes in the Old North State were looted indiscriminately and livestock shot to deny noncombatants food for themselves and their children.
Bernhard Thuersam, www.Circa1865.com   The Great American Political Divide

If Southerners Had Behaved Themselves . . .

. . . [T]he Yankees came by the hundreds and destroyed everything that we possessed — every living thing. After they had taken everything out of the house—our clothes, shoes, hats, and even my children’s clothes — my husband was made to take off his boots which a yankee tried on. The shoes would not fit, so the soldier cut them to pieces. They even destroyed the medicine we had.

In the cellar, they took six barrels of lard, honey and preserves — and what they did not want, they let the Negroes come in and take. They took 16 horses, one mule, all of the oxen, every cow, every plough, even the hoes, and four vehicles. The soldiers filled them with meat and pulled them to camp which was not far from our home. They would kill the hogs in the fields, cut them in halves with the hair on. Not a turkey, duck or chicken was left.

My mother in law . . . was very old and frail and in bed. They went in her bedroom and cursed her. They took all our books and threw them in the woods. I had my silver and jewelry buried in the swamp for two months.

We went to Faison Depot and bought an old horse that we cleaned up, fed and dosed, but which died after a week’s care. Then the boys went again and bought an ox. They made something like a plough which they used to finish the crop with. Our knives were pieces of hoop iron sharpened, and our forks were made of cane — but it was enough for the little we had to eat.

All of which I have written was the last year and month of the sad, sad war (March and April, 1865). It is as fresh in my memory and all its horrors as if it were just a few weeks ago. It will never be erased from my memory as long as life shall last.

I do not and cannot with truth say I have forgotten or that I have forgiven them. They destroyed what they could of the new house and took every key and put them in the turpentine boxes. Such disappointment cannot be imagined. My children would cry for bread, but there was none. A yankee took a piece out of his bag and bit it, and said: “If you had behaved yourselves this would not have happened.”

The Deep State: The Unelected Shadow Government Is Here to Stay 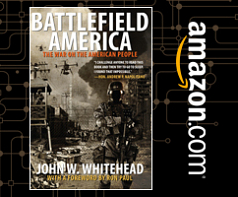 “Behind the ostensible government sits enthroned an invisible government, owing no allegiance and acknowledging no responsibility to the people.” ― Theodore Roosevelt


America’s next president will inherit more than a bitterly divided nation teetering on the brink of financial catastrophe when he or she assumes office. He will also inherit a shadow government, one that is fully operational and staffed by unelected officials who are, in essence, running the country.

To be precise, however, the future president will actually inherit not one but two shadow governments.

The first shadow government, referred to as COG or continuity of government, is made up of unelected individuals who have been appointed to run the government in the event of a “catastrophe.”

The second shadow government, referred to as the Deep State, is comprised of unelected government bureaucrats, corporations, contractors, paper-pushers, and button-pushers who are actually calling the shots behind the scenes right now.

The first shadow government, COG, is a phantom menace waiting for the right circumstances—a terrorist attack, a natural disaster, an economic meltdown—to bring it out of the shadows, where it operates even now. When and if COG takes over, the police state will transition to martial law.

Yet as I point out in my book Battlefield America: The War on the American People, it is the second shadow government, the Deep State, which poses the greater threat to our freedoms. This permanent, corporatized, militarized, entrenched bureaucracy is unaffected by elections, unaltered by populist movements, and beyond the reach of the law.

This is the hidden face of the police state.

With Open Gates: The forced collective suicide of European nations

Via sauced07 via Vox Popoli

The Ithaca, New York, public school system in recent days released heavily redacted documents surrounding a controversial presentation given in September to a third-grade class by anti-Israel activists, raising suspicions even further that the event was a skewed, one-sided indoctrination effort on impressionable children.

The conservative blog Legal Insurrection has been trying to obtain documents and videos connected to the visit to the Beverly J. Martin Elementary School by Bassem Tamimi, once convicted of soliciting youths to carry out stone-throwing attacks against Israelis.

Veteran’s Day 2015: One Man Can Make A Difference

(Editor’s Note: On this Veteran’s Day, I am posting an old favorite. I pose the question to you: What if the Confederacy had won the War Between The States…Lincoln’s War?)

How different would the world be today if the Confederate States of America (CSA) had won? Here is my version of how history might have transpired.

The first seven Southern states seceded from the Union and formed the Confederate States of America in February of 1861. The first hostilities at Fort Sumter, SC happened in April 1861.

An Exclusive Radio Presentation of the