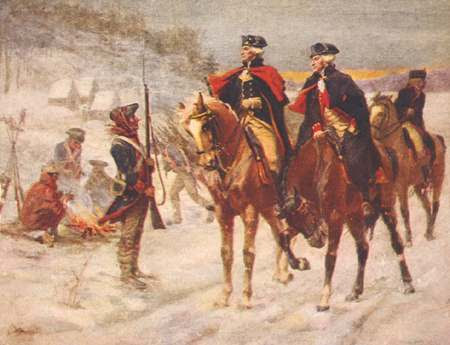 On 22 February 1732 was born to Augustine Washington & his second wife, Mary Ball Washington, a baby they named George, at what is today Colonial Beach in Westmoreland County, Virginia. Born into the gentry, George was raised by his older half-brother, Lawrence. At age 17 he was licensed by the College of William & Mary as a surveyor, an occupation that helped him invest in land in the Shenandoah Valley. Just before the French & Indian War (1754-1758) in 1753 he was early on charged by the governor with delivering a litter to the French asking them to vacate the Ohio Valley.

There he met and befriended Iroquois chiefs and secured their support for England. He distinguished himself in early fighting in Ohio, and in 1755 accompanied General Braddock on the ill-fated Braddock expedition and acquitted himself bravely in that disaster.

After the Battles of Lexington & Concord began the American Revolution in 1775, Washington appeared at congress in a military uniform. Known for his military experience, and patriotism, he was appointed General & Commander-inn-chief. Since the British later issued a royal proclamation labelling the rebels as traitors, Washington was subject to hanging if captured. In those days, patriotism didn't come cheap, nor love of liberty.

A great disciplinarian and organizer, Washington's chief virtue was refusing to admit he was whipped. Estimates vary, but probably less than 25% and sometimes less than 10% of the American population supported independence, depending on the Revolutionary Army's fortunes. A third of the population opposed the Revolution, and another third remained neutral. It's the same old story: the few patriots fought, bled, & died, and only later the non-combatants shouted hip-hip-hooray and waved flags -- after the British pulled out. Washington fought from 1775 to 1781, six long years without giving up, backed by a congress as reliable and helpful as a nest of rattlesnakes. They made his life more miserable by printing millions of unbacked paper money, the Continental Currency.

In the confusion after the War Washington participated in the Constitutional Convention of 1785. He was (I think) disgusted with the excesses of democracy the Revolution had unleashed and favored a strong central government. Most people don't realize that the constitution actually overthrew many of the self-government accomplishments of the Revolution when it overthrew the Articles of Confederation.

Washington couldn't convince Patrick Henry to support the new constitution. Henry remarked, "I smell a rat." He did, sure enough, and opposed entrusting any central government with both the power of the purse (taxation) and the power of the sword (centralized military as opposed to local militia). Washington became the first president under the new constitution, and served two terms. Very wisely, he refused a third term, and died in 1797.

From Washington's time forward American political thought can be divided into two parties, the Jeffersonian party of agrarianism and local government, and the Hamiltonian lovers of powerful central government, big business, and central banking. Today only the Hamiltonians are left in power, leaving the rest of us to root hog, or die.

In these degenerate days envious of true heroes, many have tried to debunk Washington's character. All have come away shaking their heads, beaten & unable to gainsay his iron integrity, humanity, courage, perseverance, and sincerity. He was indeed the Father of his Country.
Posted by Brock Townsend at Monday, February 22, 2016 2 comments: Links to this post

MINNESOTASTAN issues great license plate, then tries to revoke it when Muslims get their panties in a wad 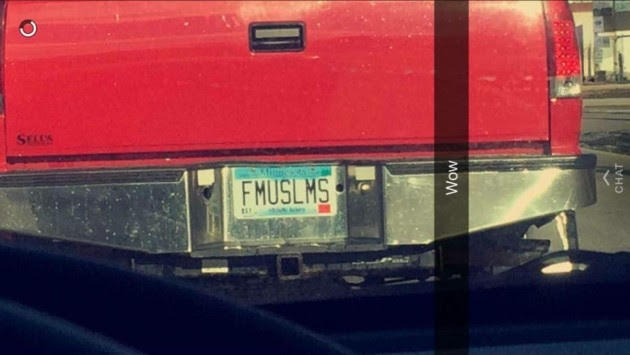 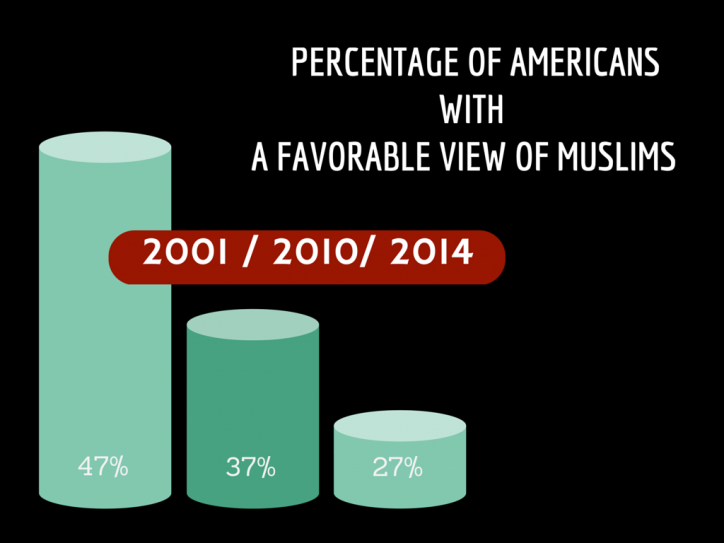 State officials were scrambling Monday to figure out how they issued a personalized license plate with an alleged slur against Muslims. A photo taken recently in the St. Cloud area and posted on social media shows a pickup truck with a plate that reads “FMUSLMS.”

MPR News  Minnesota Department of Public Safety spokesman Bruce Gordon issued a statement calling the plate “offensive and distasteful” and saying it should have never been issued. He said the department is in the process of revoking and taking possession of the plates.

Posted by Brock Townsend at Monday, February 22, 2016 No comments: Links to this post

Posted by Brock Townsend at Monday, February 22, 2016 14 comments: Links to this post

At any given moment, I am roughly 3 minutes from my truck. 3 minutes might not seem like much, but that’s a lifetime during a gunfight! I’m not one to say “My handgun is there for fighting my way to my rifle”; if the fight happens with zero notice, you will be fighting with what you have on your belt. The gear in your truck comes into play for an entirely different reason. Most of the time, if we are even remotely self-aware, large-scale events develop over minutes or hours, versus seconds. We have to have a pre-emptive plan in place for responding to potential large-scale, non-personal events that will inevitably impact our lives, travel plans and get-home routes.

Posted by Brock Townsend at Monday, February 22, 2016 No comments: Links to this post

The Center For Disease Control has released a detailed report regarding causes of death, using data from 2013. The report was released on February 16th, and nearly a week later, no mention of it by Bloomberg’s Everytown For Gun Safety, which is the research and PAC wing of his gun control efforts.

There’s a reason for the silence. They don’t want you to know that gun related homicide doesn’t even crack the top 15 causes of death in America.

They don’t want you to know that you’re more likely to die by slipping and falling down a staircase than by an “accidental” discharge.


More @ The Gateway Pundit
Posted by Brock Townsend at Monday, February 22, 2016 7 comments: Links to this post

He always seemed a bit swarmy.

This comes after Tyler today apologized for spreading a false story reporting that Sen. Marco Rubio (R-FL) made a nasty comment to a Cruz staffer about the Bible.


More @ The Gateway Pundit
Posted by Brock Townsend at Monday, February 22, 2016 No comments: Links to this post 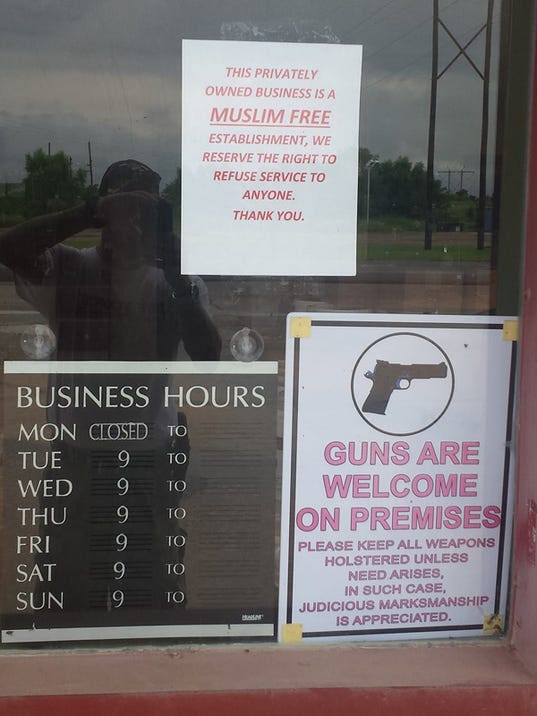 With the number of terror attacks around the world on the rise, Americans are increasingly becoming suspicious of those around them, fearing that any day radical Muslim terrorists could strike like they did in San Bernardino.

Fox News reported that a Muslim man has sued an Oklahoma gun range because they allegedly told him to leave after he identified himself as a Muslim.

The store had a sign out front declaring it a “Muslim-Free” zone, but Raja’ee Fatiha decided to go inside anyway.

Burns Chronicles No 10 – Is There a Peaceful Solution? – Redux 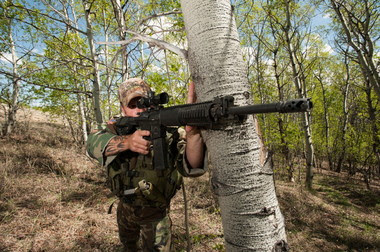 In a previous article, “Is There a Peaceful Solution?“, I included a link to a video. Based upon a number of comments, it appears that many decided not to watch the video, instead filling in the answers, for themselves. They continue to assume that there is a peaceful solution to the problems that we are facing in dealing with the federal government.

Understand that Representative Walden spoke to the House of Representatives on January 5, 2016, just 3 days after the Malheur National Wildlife Refuge was occupied, though the occupation had nothing to do with being “armed”; and the day after Dwight and Steven Hammond turned themselves over to the Bureau of Prisons, at San Pedro, California — to serve the harsh sentence imposed by the Appellate Court, not by the trial court.

I have underlined the more significant portions of what Rep. Walden had to say, so that you can fully understand that the administrative agencies tend to ignore the laws enacted in accordance with the Constitution, by that branch that has the sole authority to enact laws. The specific wording of that provision of the Constitution:

All legislative Powers herein granted shall be vested in a Congress of the United States, which shall consist of a Senate and House of Representatives.


More @ Outpost Of  Freedom
Posted by Brock Townsend at Monday, February 22, 2016 2 comments: Links to this post 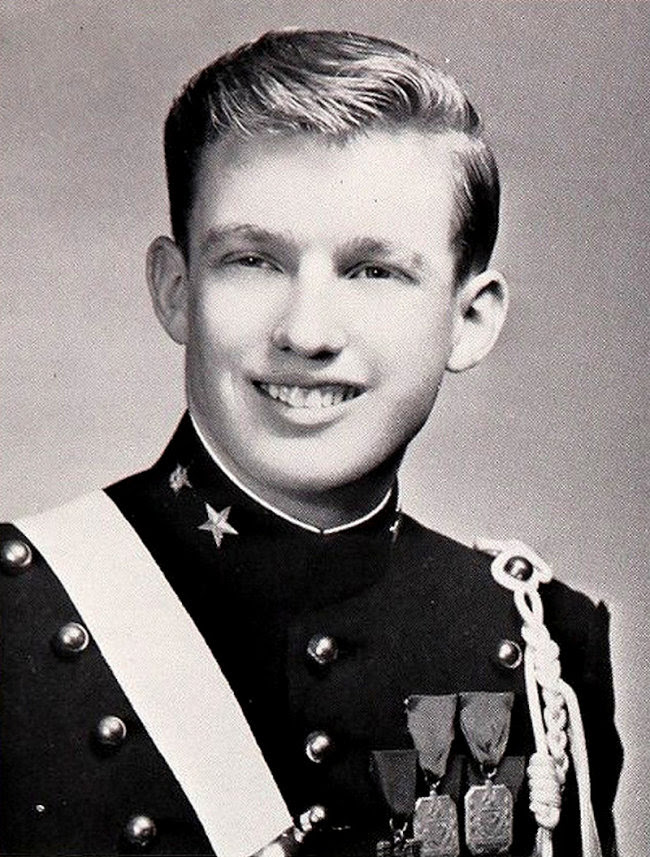 Phyllis Schlafly has been watching the GOP establishment pick our presidential candidates since before she wrote about it in her book, “A Choice not an Echo,” in 1964. She will tell you, the only president elected in her lifetime without the blessing of the establishment was Ronald Reagan.

Reagan’s ability to communicate with and inspire the American people was the only force more powerful than the money and apparatus of the establishment machine.
Jeb Bush was obviously the pick of the establishment. The money was there, and Bush was definitely spending it, but the GOP primary voter has not been swayed by the hundreds of millions of dollars being thrown at them.
After South Carolina, this is a very different race.


More @ WND
Posted by Brock Townsend at Monday, February 22, 2016 No comments: Links to this post

Via comment by Central Alabamaian on Swedish Police Admit There Are Now 53 No-Go Zones ..

Over the past two months, Europeans have become completely fed up with the wave of refugees streaming into the bloc from the Mid-East.

After demonstrating a remarkable degree of restraint and tolerance in the wake of the attacks that left 130 people dead in Paris in November, the string of sexual assaults that swept Cologne, Germany on New Year’s Eve was the last straw for a German populace that had, until this year anyway, largely remained supportive of Angela Merkel’s “yes we can” approach to settling the 1.1 million asylum seekers that the country took in last year.

That’s not to say that there aren’t still large swaths of the German population that support the migrant cause. It’s simply to note that the general consensus is no longer teddy bears, water bottles, and hugs. Discontent with the Iron Chancellor’s approach is growing and the tension is palpable.

Renewed support for PEGIDA is emblematic of the direction in which the country is headed and this weekend we got the latest evidence that Germany’s patience with migrants is wearing increasingly thin.
Residents of Bautzen (in Saxony) cheered on Saturday night as a planned migrant center burned in what very well may have been an arson. “Some people reacted to the blaze with derogatory comments and undisguised joy,” Deutsche Welle notes, before adding that “the incident in Bautzen comes shortly after a mob shouting anti-migrant slogans blocked a bus full of refugees in Clausnitz, also in Saxony.”

Norwegian government: We will abandon international law if Sweden collapses

Norway is ready to abandon the Geneva Convention if Sweden collapses. The border will be closed by force, and Swedish refugees will be rejected without the possibility to seek asylum. "We are prepared for the worst," says Prime Minister Erna Solberg.

There is such an imminent danger that the Schengen agreement, and the asylum system in Sweden will break down, that Norway must have an emergency legislation in place in case it happens, believes Norway's Prime Minister Erna Solberg. Therefore, she has crafted a law that will allow for Norwegian authorities to reject asylum seekers who do not come directly from a conflict area.