Civil Warm (sic) sharpshooter Berry Benson fought in several major battles with Gen. Lee's Army of Northern Virginia. Benson was captured and escaped from two notorious Union prisons before returning to his unit. At the war's end in 1865, he walked home with his two-band, London-made Enfield.

I first saw the monument in downtown Augusta, Ga., in 1966, as a young second lieutenant at nearby Fort Gordon. It was an impressive sight, and even though I was a Yankee from New Jersey, I was drawn to it. Statues of four Confederate generals, including the expected icons Robert E. Lee and Thomas “Stonewall” Jackson, along with lesser-known Georgians Thomas R. Cobb and William H.T. Walker, supported the base of a tall column topped by a figure of a lone infantryman at rest, a rifle in his hands. At the time I didn’t know that soldier was Berry Benson or, indeed, even who Berry Benson was. And then I left for Vietnam and my own war. Years later, while researching the Civil War and its small arms, I came across the story of Berry Benson and his Enfield rifle. And quite a story it was.

Excellent: Stonewall By Name and Nature Stonewall lay dying of his wounds at Chancellorsville — “the most successful movement of my life,” he murmured, and then remembered to give full credit to God. “I feel His hand led me.” He had smashed Fighting Joe Hooker and 134,000 invaders of Virginia with 60,000 Confederates. Jackson didn’t mention General Robert E. Lee who was with the reserves that battle.

Eight days would pass from the night of May 2, 1863, when a Confederate volley ironically struck Jackson down, until his beloved physician, Dr. Hunter Holmes McGuire, his ear close to the General’s lips, made out the unforgettable words, “Let us cross the river and rest in the shade of the trees.” The length of the death watch gave ample time for soldiers’ talk of battle, death and wartime politics.

Much of it took place around Jackson’s shattered body which had been moved by litter and wagon-ambulance, often under Yankee artillery barrage, through mountain terrain to Guiney’s station some forty-five miles from Richmond. Somebody mentioned the then pending resolution before the Confederate government to designate Jackson’s original command as the Stonewall Brigade, wholly unprecedented in military orders.


More @ The Abbeville Institute
Posted by Brock Townsend at Saturday, January 28, 2017 No comments:

Trump says Syrian Christian refugees will be given priority

President Donald Trump said on Friday that Syrian Christians will be given priority when it comes to applying for refugee status in the United States.

"If you were a Muslim you could come in, but if you were a Christian, it was almost impossible and the reason that was so unfair, everybody was persecuted in all fairness, but they were chopping off the heads of everybody but more so the Christians," Trump said in an excerpt of an interview with the Christian Broadcasting Network.

Trump continues to outwit the press: ‘A carefully maintained strategy’

President Trump has a unique skill set when it comes to getting his message to the American people, wrangling the press and emerging from the effort unscathed. His dealings with journalists are precise and canny, indeed.

“Why are the relations between Donald Trump and the press so bad? There are two reasons. One is that Trump is a Republican, and the press consists overwhelmingly of Democrats. But the other reason is that Trump likes it this way, because when the press is constantly attacking him over trivialities, it strengthens his position and weakens the press,” writes Instapundit columnist Glenn Reynolds in USA Today. “Trump’s ‘outrageous’ statements and tweets aren’t the product of impulsiveness, but part of a carefully maintained strategy that the press is too impulsive to resist.”

The president, Mr. Reynolds says, “has more media experience than probably 99 percent of the people covering him.”

Surprise! Trump doing what he said he would: CNN Complains 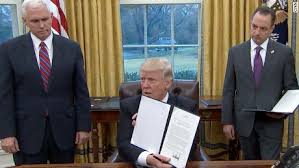 In his first frantic week at the White House, Donald Trump is doing almost exactly what he promised to do during his campaign, stunning those who thought he'd adapt his style as president.

Trump has signed an executive order to begin building a wall on the Mexican border and doubled down on his promises to renegotiate the North American Free Trade Agreement and repeal ObamaCare.

Actions to temporarily suspend visas for people coming to the United States from a number of Muslim nations are expected to come soon.

Trump hasn't stopped tweeting either, nor has he quit his habit of launching into new fights seemingly on a whim. Much of his first week in office has been dominated by his claims, without any evidence, that massive voter fraud cost him a popular vote victory to Democratic presidential nominee Hillary Clinton.

On Wednesday, he announced a “major investigation” into his unsubstantiated claims about voter fraud.

The IRS Conservative Targeting Scandal involved:
Now this…
IRS Chief, John Koskinen is on the chopping block according to reports.

David Brock, the seasoned liberal operative and Clinton loyalist who founded Media Matters, huddled with more than 100 donors last weekend at the swanky Turnberry Isle Resort in Aventura, Fla. to map out how Democrats will “kick Donald Trump’s ass.”

Congresswoman Returns from Secret "Fact Finding Trip to Syria: "There Are No Moderate Rebels in Syria"


This is not ground-breaking news for those who have been following the story of the rise of the Islamic State in the Middle East.  However, following a visit to Syria and secret meeting with Bashar al-Assad, one congresswoman is claiming she has proof that the Obama administration funded the Islamic State.

In an interview on CNN following a secret "fact finding" trip to Syria, Rep. Tulsi Gabbard (D-HI) said that Syrian President Bashar Assad should be left in power and communicated that there were no moderate rebels in Syria.

"I don't think Assad should be removed," Gabbard said. "If Assad is removed and overthrown, ISIS, al Qaeda, Al Nustra, these Islamic extremist groups will walk straight in and take over all of Syria ... they will be even stronger."