"Bulgaria will not join a United Nations accord on regulating the treatment of migrants worldwide and would not attend the conference marking its formal adoption in Morocco next week, its centre-right government decided on Wednesday," Reuters reports.

The pact reportedly seeks to make immigration a "human right" and "criminalize criticism of migration" as "hate speech."

Trump confidant Roger Stone came out swinging in the president's defense on Thursday at the American Priority Conference in Washington, D.C.

Stone, who was an informal Trump 2016 campaign adviser, reiterated that he would assert his Fifth Amendment right not to testify or provide documents to the “witch hunts” of the Senate intelligence and judiciary committees.

He said he would only testify if it was in public “in front of the American people,” which he said was denied to him in September 2017, when Stone testified in a closed-door setting with the House Intelligence Committee for roughly three hours.

Search if you want to read the rest as Fox won't allow the FNC link. :)
Posted by Brock Townsend at Thursday, December 06, 2018 4 comments:

Lessons in Conservatism from Andrew Johnson Andrew Johnson was born into poverty in rural North Carolina. His father died after saving some town locals from drowning and left the family to fend for themselves in a two-room shack. A young Andrew began working as a tailor’s apprentice and developed an appreciation for the laboring class early on.

There Are Now FOUR Criminal Complaints, Pending Lawsuits, Or Investigations Into Robert Mueller

As special counsel Robert Mueller comes under scrutiny for his role in the Uranium One scandal — with the FBI raiding a Uranium One whistleblower’s house — the number of criminal complaints, lawsuits or investigations into his potentially criminal conduct is growing. That number has reached at least four.

Let’s walk through some of our coverage of the Robert Mueller investigation, which we have been digging into since Mueller’s appointment in May 2017, a month after our inception. (READ: An Army of FBI Whistleblowers Are Ready To Testify Against Mueller).

1. Dr. Jerome Corsi has filed a criminal complaint against Robert Mueller for trying to coerce him to lie. 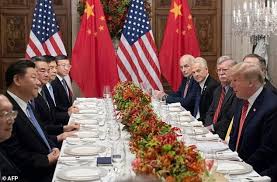 The Chinese Ministry of Commerce released a statement on Wednesday morning on the Trump Xi dinner meeting in Buenos Aires on Saturday.

he Chinese Government released a very positive statement on the meeting.

More @ The Gateway Pundit
Posted by Brock Townsend at Thursday, December 06, 2018 No comments: