@ NSSF
Posted by Brock Townsend at Friday, June 20, 2014 No comments: Links to this post

Gun-toting crook: 'Betcha ain't got one of these'

Boy, was there a surprise for an armed robbery suspect who pointed his gun at his intended victim and said, “betcha ain’t got one of these.”

The intended victim did.

And knew how to use it.

Leaving the armed robbery suspect with a gunshot wound in his chest and a case that is pending before the Hinds County, Mississippi, grand jury.

Yesterday was a significant day in the IRS abuse scandal. The scandal evolved from being about pesky delays in IRS exemption applications to a government conniving with outside interests to put political opponents in prison.

Emails obtained by Judicial Watch through the Freedom of Information Act reveal Lois Lerner cooking up plans with Justice Department officials to talk about ways to criminally charge conservative groups that are insufficiently quiet. 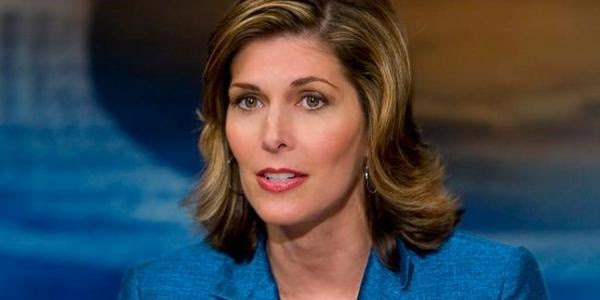 The Obama administration has been awash with scandals – some that have been said to surpass Watergate – and yet America’s mainstream press has apparently forgotten its role as watchdog, claims Fox Business News’ Lou Dobbs, and his award-winning journalist guest has a theory as to why.

Emmy-winning investigative journalist Sharyl Attkisson appeared on the June 19 “Lou Dobbs Tonight” program and explained the media isn’t digging into allegations the White House used the power of the IRS to target tea-party groups because “propaganda interests” have intimidated reporters so severely, they’re afraid if they cover the administration’s scandals, they’ll be seen as a “right-wing nut.”

“Whether it’s Fast and Furious, whether it is spying on a journalist, whether it’s IRS targeting, Benghazi, the list goes on and on and on,” Dobbs posited to Attkisson. “Yet the national liberal media, as I often style it, simply will not rise up to the level of a watchdog for the state. Instead they are behaving much more like lap dogs. It is, to me, mind boggling.”

Posted by Brock Townsend at Friday, June 20, 2014 2 comments: Links to this post

Who Is Mohamed Elibiary?

Mohamed Elibiary is a senior member of the Department of Homeland Security Advisory Council. According to a report by the Center for Security Policy, Elibiary also supports brokering a U.S. partnership with the Muslim Brotherhood terrorist group.

This week, Breitbart’s Kerry Picket reported that Elibiary wrote on Twitter that it is “inevitable that [the] Caliphate returns.”

Under an Islamic caliphate, all citizens would be forced to comply with the highly oppressive Islamic Sharia law.

Elibiary was seemingly indifferent towards the caliphate-seeking tactics of the ruthless terrorist group known as Islamic State of Iraq and al-Sham (ISIS), which is marching through Iraq slaughtering non-Sunni Muslims and beheading innocents. He said on Twitter, "Kind of comical watching pundits on some US TV channels freak out about an #ISIS #Caliphate." He continued, "Easy folks, take deep breath & relax. #Iraq."

Atlanta-based left-wing radical talk show host Mike Malloy says that if he sees a long gun open carrier, he’s going to do everything in his power to cause a panicked and potentially deadly police response:


I guess what I’ll do if I’m ever in that situation and I see one of these half-witted yahoos walking in with a weapon, high-caliber rifle like that, I’ll just put on a berserk act.I will just start screaming Gun! Gun! Gun! Watch out, everybody hit the deck! Guns!

Guns! Everybody! And then dial 911 and I will say, shots fired, which will bring every g**-damned cop within 15 miles. And then the half-wits with the long guns are going to panic and they’re going to run out of the store and if that rifle isn’t shouldered properly, the cop is going to take a look at that and put a bullet right in their forehead.

Hank Williams III: A Southerner, not a Brit, should play my granddad in upcoming biopic 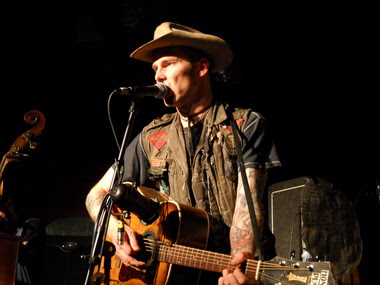 Shelton Hank Williams is looking to clarify any misconceptions following a TMZ article that claimed the singer "blasted" an upcoming biopic about grandfather Hank Williams.

The TMZ article, published on Wednesday, reported that Williams, known as Hank3, said producers of the film 'blew it' when they cast British actor Tom Hiddleston.

The article suggested that Hank3 thought only an American should play the role and named Matthew McConaughey as his first choice.

In response, Hank3 posted a lengthy status update explaining his comments on the film and providing a more in-depth reasoning for them. The singer said his choice of McConaughey had little to do with being an American and more to do with being an actor that has played Southern roles with confidence in the past.

"The main Reason I said Matthew McConaughey would be a good person for this role is because of he has played many roles as a Southern man," said Williams in the status. "And he is from the South. And that is something no amount of money or acting classes can put into a role.

An Idaho man says he is glad he recently obtained a concealed weapons permit after he said he was forced to pull his gun when a man wielding a knife approached him and his two-year-old daughter on Wednesday.

“Me and my daughter were parked here and I was standing by the vehicle on the rail,” Anthony Broyles told KREM.

Father and daughter were spending the day together at Lake Coeur d’Alene.

“There was a van that was parked in that direction with two gentlemen sitting in it,” he said.

Posted by Brock Townsend at Friday, June 20, 2014 No comments: Links to this post

The Only Ones Professional Enough…

A police officer discharged his AR-15 yesterday while showing off for a judge in a Miami courthouse. Did I say “showing off?”

I meant to say that he had a dangerous negligent discharge with a live round during a training exercise: 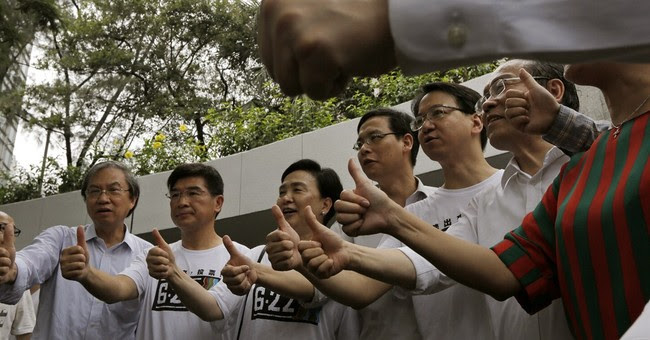 Tens of thousands of Hong Kongers voted Friday in an unofficial referendum on democratic reform that has alarmed Beijing and sets the stage for a possible showdown with the government, with mass protests aimed at shutting down the Chinese capitalist enclave's financial district.

Tensions are boiling over in Hong Kong, which came back under Chinese control in 1997, over how to choose the city's next leader.

Since the end of British colonial rule, Hong Kong's leaders have been picked by an elite pro-Beijing committee. Beijing has pledged to allow Hong Kongers to choose their own chief executive starting in 2017.


More @ Townhall
Posted by Brock Townsend at Friday, June 20, 2014 No comments: Links to this post

Lawyer: Military Employee Admitted He Was Paid by Army to Attend Private Activist Meetings in Homes

An attorney pursuing a lawsuit against alleged domestic United States military spying says during depositions in the case a civilian employee who worked for the Army admitted he was paid to attend activist meetings at private homes in the state of Washington. And a fusion center intelligence employee, who coordinated with the military, also considered civil disobedience to be “terrorism.”

The lawsuit is known as Panagacos v. Towery. It accuses the US military of directing John Jacob Towery, who worked for the US Army Force Protection Division at Fort Lewis, to infiltrate a group called the Port Militarization Resistance (PMR) in Olympia and Tacoma, Washington. It also accuses the cities of Olympia and Tacoma of coordinating with the military to violate the First and Fourth Amendment rights of activists.


More @ The Dissenter
Posted by Brock Townsend at Friday, June 20, 2014 No comments: Links to this post 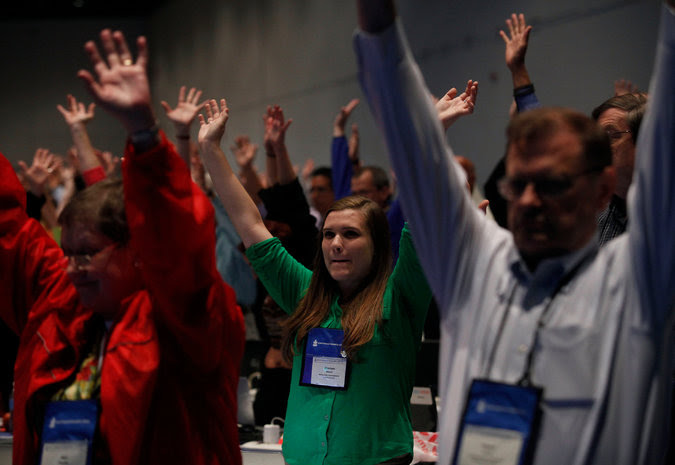 The Presbyterian Church (U.S.A.) voted at its General Assembly on Thursday to change its constitution’s definition of marriage from “a man and a woman” to “two people,” and to allow its ministers to perform same-sex marriages where it is legal.


Both measures, passed by large majorities, are a reversal for a church that in 1991 and in 2008 barred its pastors from performing same-sex marriages, and that has held ecclesiastical trials for ministers who violated the ban and blessed gay couples.

On January 29, 2014, the Federal Government posted an ad on their BizOpps website seeking escorts for unaccompanied illegal alien children. If this doesn't prove that the entire mess with all the illegals flooding our country was planned by this administration, nothing ever will. Here is the entire document that lays out the "requirements" to become such an escort: (I have highlighted interesting points) MAKE THIS GO VIRAL!


More @ The Conservative Wife
Posted by Brock Townsend at Friday, June 20, 2014 4 comments: Links to this post

The non-partisan fiscal staff found that the Moral Monday agenda, if implemented, would require state lawmakers to raise taxes by $7 billion. For some context, such a tax hike would increase the North Carolina general fund by a whopping 35 percent. The Moral Monday plan would also necessitate a nearly ten-fold increase in the state corporate income tax, taking the rate from 6 to over 50 percent.

Combined with the federal corporate income tax, the highest in the world, if Rev. Barber and crew had their druthers, companies would face a combined corporate tax rate of over 80 percent on profits earned in North Carolina. The likely result of such an onerous tax would be a mass evacuation of companies from Research Triangle Park, Charlotte, and elsewhere in the state.

The Raleigh-based Civitas Institute estimates the Moral Monday agenda would require an additional $10 billion a year in higher tax revenue, which amounts to an unheard of 50 percent increase in the state general fund.

Posted by Brock Townsend at Friday, June 20, 2014 No comments: Links to this post