Common During The Last Days Of Saigon

When Americans withdraw from the South, while the plane withdrew the stairs to prepare to take off, the Vietnamese couple had a definitive decision but also very painful. It is that they gave the child that they gave birth to American soldiers with only one hope that their children won't have to live in CS prison. Surely they have seen how American soldiers love children everyday so dare to risk it...?

I dare not talk about this couple's love to their child. But I want to let you hate Americans know that if Americans are as cruel as CS propaganda then why do this couple dare to hand their children to strangers and hope their children won't have to hurt as miserable as themselves?

Also, if Americans are as cruel as CS propaganda then why don't Southern people hate America? Think with the remaining gray in your head and don't get your nose like buffaloes!
Posted by Brock Townsend at Friday, March 27, 2020 2 comments:

Southern viewers must naturally be interested in what Hollywood has done with America’s greatest 20th century writer, William Faulkner of Mississippi.

**Intruder in the Dust (1949).  Perhaps the most faithful of all Faulkner’s work on film, and a realistic portrayal of Southern life in the early 20th century.  An old lady (Elizabeth Patterson) and two boys, one white and one black, go to great lengths to save a cantankerous black man from a murder charge and lynching.


More @ The Abbeville Institute
Posted by Brock Townsend at Friday, March 27, 2020 No comments:

The Only Thing That Could Save the North Was War


Major Robert Anderson, Union commander inside Fort Sumter, emphatically blames Lincoln for starting the war Lincoln had to have to save the North.

Lincoln needed to start the war as fast as he could before Southerners completed trade and military alliances with England and other European countries, which they had been pursuing with great enthusiasm for months. With every second that went by, the South got stronger and the North got weaker. Lincoln knew there was no advantage, whatsoever, to waiting.

Everything we do from now on is in preparation for what comes next. We will fight against the powers of communism with everything we have. We will take everything we can get from the government to deprive it of the spoils to mete out to their communist supporters. It is a fight over the bones of the once powerful elephant. Our sustenance is it's flesh.

There is no legal means by which to quarantine HEALTHY people, other than communist-level restrictions of liberty. If we were a better educated people, it would be sufficient to request that we do the intelligent things to avoid any spread of the disease, but since the public school system has been utilized to convert logical intelligent people into obedient slaves of governmental dictates, these quarantines are the only means by which to ensure compliance.

“Although Sheriff Gerald Baker claims his refusal to accept applications for pistol purchase permits and concealed handgun permits doesn’t infringe on individual rights, nothing could be further from the truth,” said GRNC president Paul Valone. “During this emergency, as always, GRNC intends to ensure that lawful North Carolinians have the means to protect themselves and their families.”

“Sheriff Baker is implementing by fiat what the Supreme Court struck down in Heller – a ban on a citizen’s right to purchase a handgun for the defense of hearth and home. This action cannot be allowed to stand,” said GRNC Director of Legal Affairs Ed Green.

“Times of emergency is when you need the ability to obtain the means of self-defense the most. Suspending that right is not acceptable. That is why this lawsuit is so important,” commented SAF founder and Executive Vice President, Alan Gottlieb.

“Sheriff Baker’s unconstitutional actions have and will deprive law-abiding, peaceable individuals the opportunity to obtain handguns, the ‘quintessential self-defense weapon’ according to the U.S. Supreme Court, in a time where the arms are most needed,” explained attorney and FPC Director of Legal Strategy, Adam Kraut. “Sheriff Baker’s actions to stop processing and issuing required  Pistol Purchase Permits violate fundamental human rights. We are proud to join GRNC and SAF in this fight to defend the rights of North Carolinians.”

Second Amendment Foundation (www.saf.org) is the nation’s oldest and largest tax-exempt education, research, publishing, and legal action group focusing on the Constitutional right and heritage to privately own and possess firearms. Founded in 1974, The Foundation has grown to more than 650,000 members and supporters and conducts many programs designed to better inform the public about the consequences of gun control.

HB 516 is Law! Constitutional Carry in Idaho is Now for All Americans!

You did it Idaho!

In a time of this nation's history where things  are tense and uncertain, we have some great news for Idahoans and all Americans.

Gov. Brad Little has signed HB 516, the final piece of Constitutional Carry in Idaho, into law!

This is an historic occasion for our state and for our country. You should all be proud of the hard work you did to make this happen.

When we started this organization nearly eight years ago we had no idea what we were in for.

We had no idea it would take as long as it did in a Republican state.

However, with your hard work and pressure on the legislature, we have achieved something incredible!

In 2016, we passed the first portion of Constitutional Carry for all Idahoans 21-years-old and older.

Then, last year, thanks to Rep. Zito, we lowered the age limit for Constitutional Carry to 18-years-old and over.

Now, Idaho recognizes that ALL Americans have the right to carry in our state without a permit. Most states with Constitutional Carry do not have a so-called residency requirement and now Idaho won't either!
Posted by Brock Townsend at Friday, March 27, 2020 No comments:

Coronavirus
The order permits the following businesses to remain open:

Gov. Roy Cooper issued a statewide stay-at-home order during a Friday afternoon briefing in an additional effort to curb the COVID-19 pandemic.

The stay-at-home order will go into effect at 5 p.m. Monday.

"To continue our aggressive battle to slow the spread of COVID-19, today, I have signed a stay-at-home order for the entire state of North Carolina. Enforcement begins at 5 p.m. on Monday, but we urge you to start as soon as possible," Cooper said.

The order calls for all North Carolina citizens to reduce their travel, staying home as much as possible. It does not ban essential business or make it illegal for citizens to be outside their homes to get fresh air. (Ahhh, so kind of him)

Vietnam said it will stockpile 270,000 tonnes of rice, including 80,000 tonnes of unhusked rice, to ensure food availability amid coronavirus-driven supply chain disruptions worldwide.

The first 190,000 tonnes of rice is to be warehoused by June 15, the Ministry of Finance said in a statement late on Thursday.

"Food security must always be the first priority," the statement said.

The Vietnamese government said on Wednesday it would halt signing new rice export contracts until March 28 at the earliest under a review to ensure it has enough domestic supplies to cope with the virus outbreak.

Vietnam
Posted by Brock Townsend at Friday, March 27, 2020 No comments: 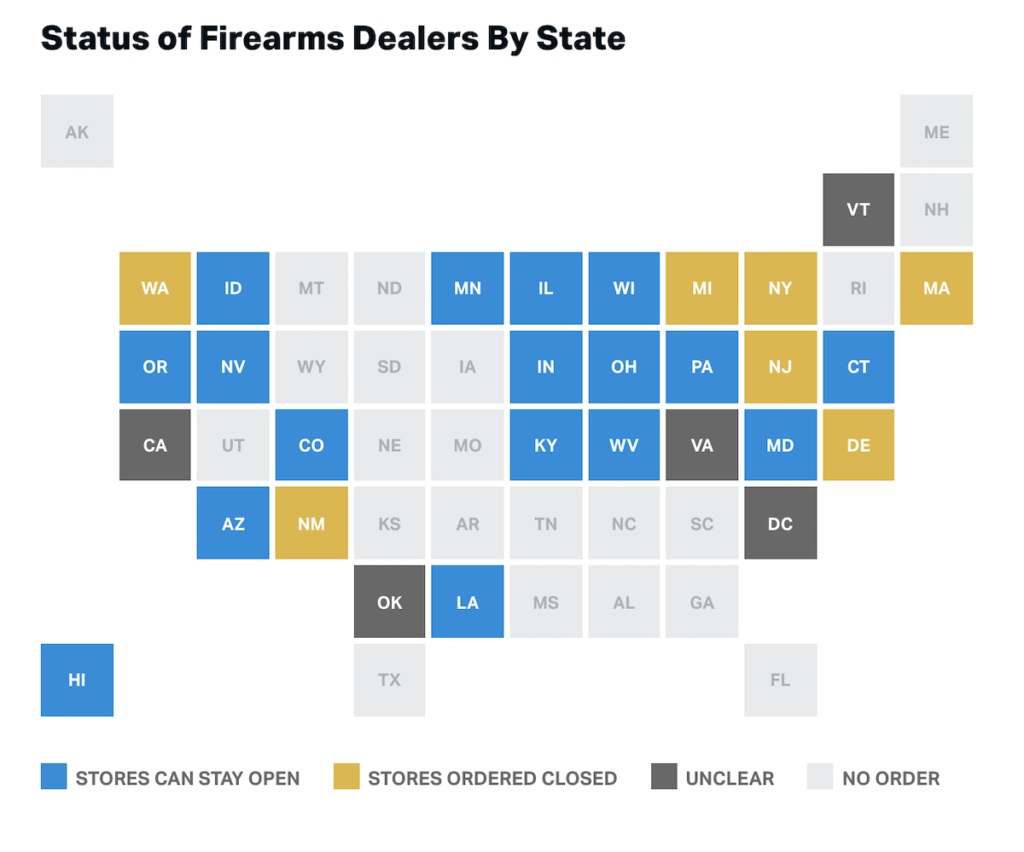 Those states that have put the squeeze on FFLs — WA, MI, NY, NJ, NM, DE, MA — have done so because officials believe gun stores are “non-essential” businesses and therefore should be closed under the various shelter-in-place directives aimed at “flattening the curve” or slowing the spread of the novel coronavirus, as GunsAmerica previously reported,

More than a handful of other states have taken the exact opposite approach to ensure gun stores stay open during the crisis so that citizens can continue to exercise their right to keep and bear arms.

How Grandmother’s Gargling Remedy Could Help Abate The Wuhan Flu


Every-time you went on sick call at Greenbrier, Nurse Mitchell had you gargle with warm water with salt first.  Once a cadet came in with a broken leg but her response was the same.

Theoretically, the remedy your grandma gave you when you had a sore throat could be used as a proactive step to help kill the Wuhan coronavirus.
Many elders remember being told as youngsters to gargle with saltwater to avoid getting a cold or sore throat. Well, guess what? Grandma may not have known why this was a good idea scientifically, but that doesn’t make it any less effective.

We also know about the cleaning power of bleach and are using it to sanitize surfaces amid the Wuhan coronavirus. Have you ever wondered why this works? A certain chemical, hypochlorous acid (HOCL), in the bleach kills pathogens, including fungus, bacterium, and virus. Obviously, it is not safe to inhale or ingest bleach. However, we do have an easy and safe alternative.


More @ The Federalist
Posted by Brock Townsend at Friday, March 27, 2020 No comments: Of nine leaders and institutions rated by Americans in a new poll on their response to the novel Wuhan Coronavirus, the media fared the worst, and it’s not even close.

According to a new Gallup poll released Wednesday, the media was the only institution that scored a negative approval rating among the public with only 44 percent of Americans approving of the way the media has covered the virus. Fifty-five percent disapprove making for a -11 percent rating.


More @ The Federalist
Posted by Brock Townsend at Friday, March 27, 2020 No comments: