With the death toll in West Africa continuing to rise amid a new outbreak of the Ebola virus, leading medical experts announced Wednesday that a vaccine for the deadly disease is still at least 50 white people from being developed. “While all measures are being taken to contain the spread of the contagion, an effective, safe, and reliable Ebola inoculation unfortunately remains roughly 50 to 60 white people away, if not more,” said Tulane University pathologist Gregory Wensmann, adding that while progress has been made over the course of the last two or three white people, a potential Ebola vaccination is still many more white people off.


More @ The  Onion
Posted by Brock Townsend at Thursday, October 02, 2014 2 comments: Links to this post 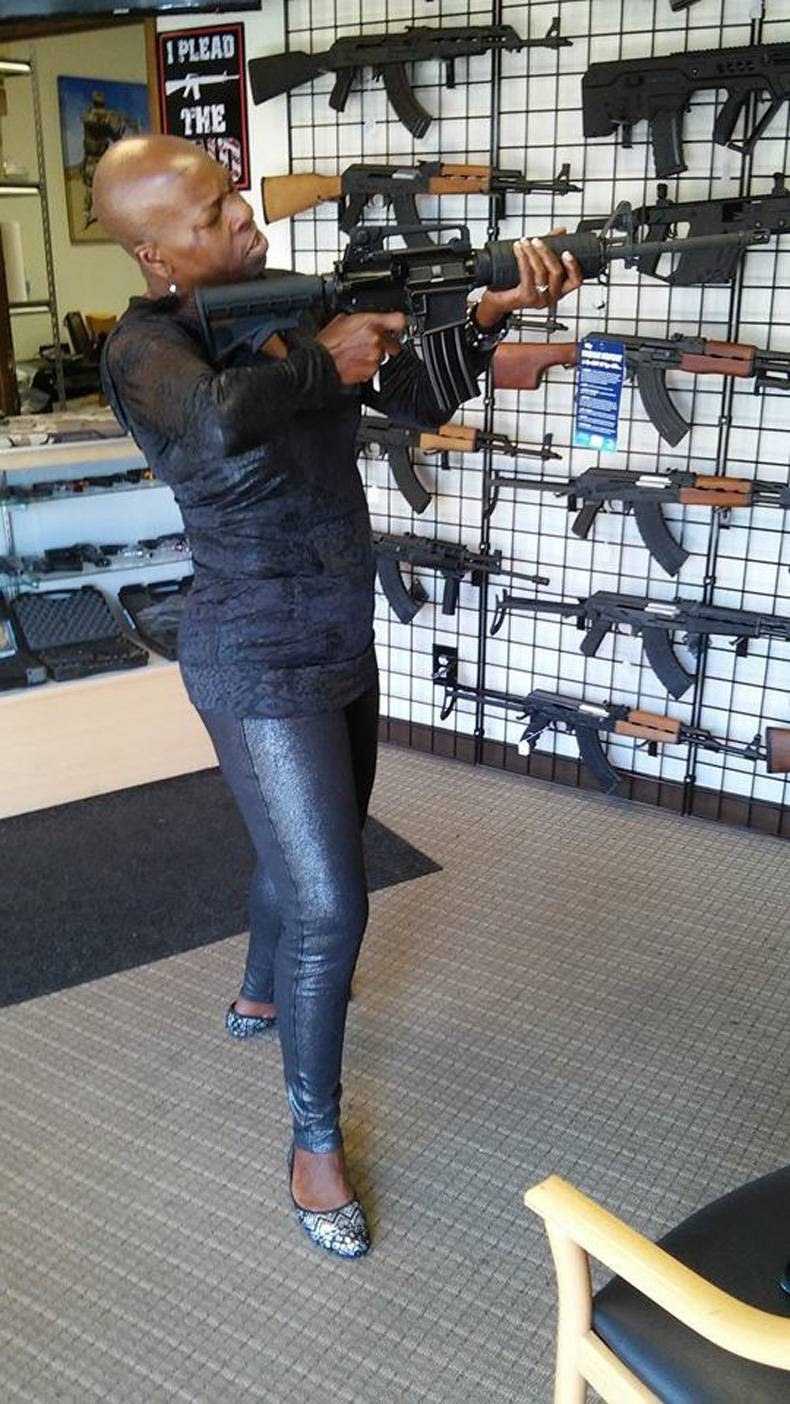 Posted by Brock Townsend at Thursday, October 02, 2014 30 comments: Links to this post

Poll NC: Should guns not be permitted at the state fair even though state law dictates otherwise? 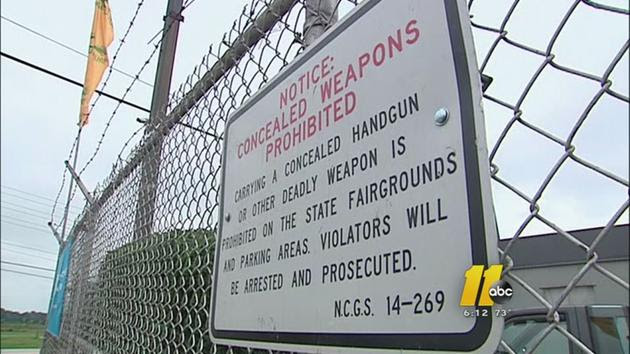 While guns will not be permitted at the NC State Fair, a gun advocacy group believes a bill signed into law last year gives gun owners the right to carry a lawfully concealed gun at the fair. Do you think they should be allowed by permit holders?

Posted by Brock Townsend at Thursday, October 02, 2014 4 comments: Links to this post

'I want them raped and killed in jail'

Via comment by Anonymous on Video shows broad daylight armed assault against w... 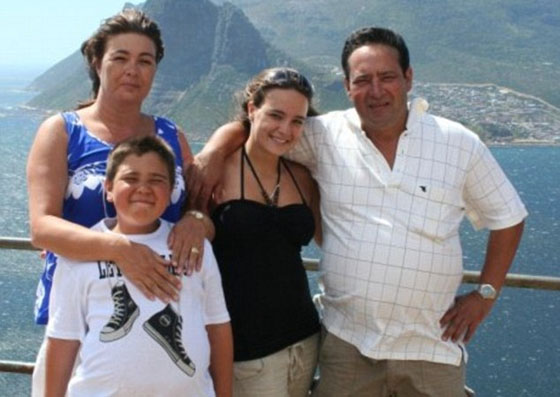 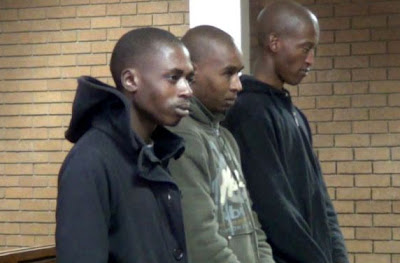 On October 1 2011, Antonio Viana, his wife Geraldine and their 12-year-old son Amoro José Viana were killed by their gardeners at a plot in Walkerville in the Vaal.

Sipho Mbhele, 20, and Patrick Radebe, 23, were sentenced to five life sentences and 24 years in jail each.

"I welcome the sentences even though this will not bring my children back," said Dryer. "Patrick Radebe was raised by my family since he was five, and they took him as one of their own."

Mbhele and Radebe, together with Siphiwe David Motaung, broke into the Vianas' house. When Antonio arrived and surprised them, Motaung fled, leaving Mbhele and Radebe behind.

The pair hacked him 12 times on the head with a panga and took his pistol.

House Bill 937, which became effective on October 1, 2013, dramatically expanded North Carolina’s concealed handgun law into restaurants where alcohol is sold and consumed, assemblies of people for which admission is charged, parades and funerals, further into state and municipal parks, and even to a limited extent into educational properties.

As always when we expand concealed handgun laws, opponents and media naysayers predicted shootings in bars, guns stolen from vehicles at schools, and various other sorts of mayhem using platitudes like “guns and alcohol don’t mix.”

GRNC explained endlessly that concealed handgun permit-holders, by virtue of background checks and training, had proven themselves sane, sober and law-abiding since 1995, with a rate of permit revocation on the order of three tenths of a single percent. We explained that permit-holders in restaurants would still be prohibited from imbibing alcohol.

So what has happened?

Guns: The Obrez and its Cousins

’m not sure where it started, but the “obrez” has gained a decent bit of recognition among gun folks (particularly gun folks on the internet). The concept is a Mosin-Nagant rifle with the barrel cut down to 4-8 inches and the buttstock lopped off, to make a concealable weapon in leiu of a proper pistol.

Mosin rifles were fairly common and handguns much more difficult to obtain, so the obrez was a way for folks who needed a sneaky gun (be they criminals, partisans, or revolutionaries) to conceal under a coat. Recoil is pretty hefty, and accuracy non-existent, but they work well enough in close quarter.

There are a number of videos on YouTube of folks shooting obrez’s (I really don’t know how to pluralize that…), and this one is a good representation:'

One-half of LAPD Cops Are Disabling Their Recorders

What good are lapel cams and microphones if the cops are disabling them? Why aren’t they being fired for this?

“No one likes to be monitored,” says Sid Heal, recently retired commander who evaluated technology during his decades-long tenure at the Los Angeles County Sheriff’s Department. And? If you do not want to be filmed and recorded don’t be a cop.

According to the arstechnica.com, The Los Angeles Police Commission is investigating how half of the recording antennas in the Southeast Division went missing, seemingly as a way to evade new self-monitoring procedures that the Los Angeles Police Department imposed last year.

In 2010, the Obama administration quietly dumped Bush-era plans to enact quarantine regulations supported by the Centers for Disease Control that were designed to prevent travelers from spreading infectious diseases.

Travelers would have been required to submit detailed personal information before boarding a flight or ship.

Posted by Brock Townsend at Thursday, October 02, 2014 15 comments: Links to this post 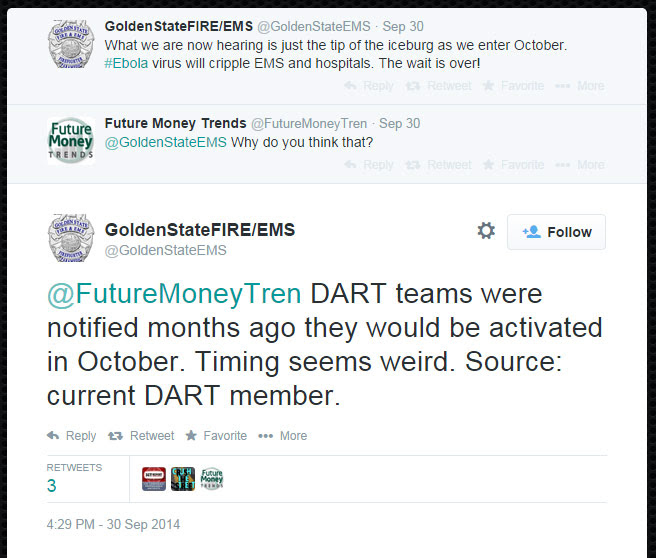 A public tweet from a large government supplier of emergency response products specializing in “high risk events” says that Disaster Assistance Response Teams were told to prepare to be activated in the month of October. The shocking revelation, made on the Goldenstate Fire/EMS Twitter page, suggests that not only did someone know that the Ebola virus would be reaching America, but that they knew exactly when it would happen.

Posted by Brock Townsend at Thursday, October 02, 2014 13 comments: Links to this post

Via comment by Sioux on And So It Begins… 2nd Potential Ebola Patient Bein... 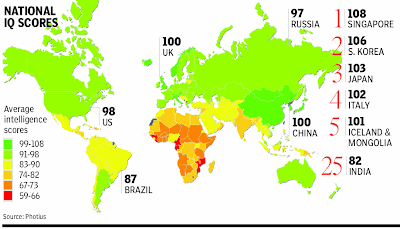 So there is tremendous chatter about this guy from Liberia, and we now have enough of the backstory to see just how maliciously negligent the so-called protection agencies really are.  But what I want to focus on is Thomas Eric Duncan – the Liberian who after hauling his sister’s still living yet rapidly disintegrating body to and from the hospital thought it would be a great idea to take a three-legged flight to Dallas, and then just casually forget to mention at the Dallas emergency room the whole “I hauled my sister, dying of Ebola, to and from the hospital a couple of weeks ago.”

There is speculation that Duncan is a psychopathic arch criminal, or that he was recruited by musloids to make the trip.  Nope.  I doubt this very, very seriously.  Then how in the world, you may ask, could he possibly DO THIS?  I’ll tell you the likely answer if you really want to know, but I warn you, our culture has conditioned even the “strongest” of you to reject the truth I am about to lay out.  Are you sure you want it?  Fair warning has been given.  Complaints will not be fielded.

The AVERAGE I.Q. amongst Liberians is 67.  Anything below 69 is considered severe impairment. Only people who are profoundly mentally retarded, such as with severe Down Syndrome, have lower I.Q. scores, and many folks with milder Down Syndrome actually have I.Q. scores in the 70s and 80s.  What we are talking about in Liberia is the AVERAGE IQ of non-impaired human beings.  AVERAGE.  Which means, by definition, that half the populace is above 67, and half the population is below 67. 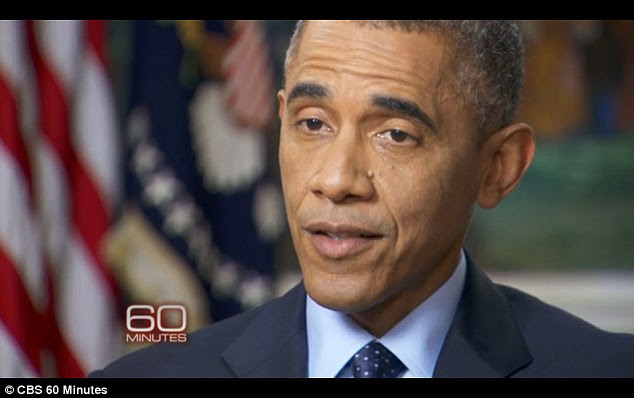 There is a theory in politics that once a leader has fired 50 or more people from his or her administration, he or she is finished.

The reason being that by creating so many enemies ‘outside the tent’, the tent itself becomes too deluged with poisonous bile to avoid sinking into a quagmire of back-stabbing ignominy.

He managed to single-handedly alienate 200,000 employees in the American intelligence agencies by going on 60 Minutes and ruthlessly chucking them all under a bus over the rise of terror group ISIS.