Oklahoma 1955: Back When The World Was Sane

Posted by Brock Townsend at Sunday, May 14, 2017 No comments: Links to this post

The Tao on Historic Places

Loosely meaning “the way” or “the path,” Taoism originated in prehistoric China and has exerted a strong influence over Chinese thinking for ages. During China’s cultural revolution of 1966-1976, many Taoist temples were desecrated and monks sent to hard labor camps. Nonetheless, the Taoist view of historic places and memorials to the past resonate today.
Bernhard Thuersam, www.Circa1865.com   The Great American Political Divide

The Tao on Historic Places

Look as if they’ve been lacquered,

Rooted around an old battlefield,

There are still places where you can walk and feel a profound gloom. Such is the case with old battlefields. People died there. The force of their determination still resonates.

You can find such places in every country. Often, no one builds anything there, even when land is dear. We say that we do not want to forget our dead. We say there should be a memorial. Others say that the disturbance there is so great that the living cannot abide with the dead.

History is essential to our understanding of the present. Unless we are conscious of the way in which we came to this point in time as a people, then we shall never fully be able to plan the present and the future. We need to know what roots are still alive.

History is not always glorious. Sometimes our history is melancholy. We must accept that. This life is terrible and people do terrible things to each other. If we are to live for the sake of the good and strong, then we should have as much of a background as possible.”

Via Iver "Made my day"

What It All Was About In Ten Words 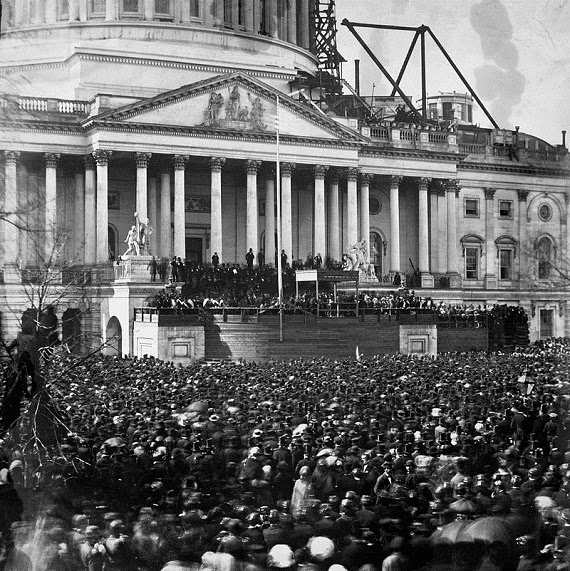 On August 24th, 1864, President Abraham Lincoln wrote to politician and editor Henry J. Raymond that Raymond might seek a conference with Jefferson Davis and to tell him that hostility would cease “upon the restoration of the Union and the national authority.” In other words, three plus years of hideous bloodshed and war crimes would simply be ended on the above mentioned conditions.

But there is so much more in those ten words than might be seen by the casual observer. Of course, Jefferson Davis was hardly “a casual observer!” He understood the conditions under which his nation and his people would be spared further torture and destruction but he chose not to follow the path of abject slavery. It is interesting to note that a war many people declare solemnly was fought “to abolish slavery” among blacks was in fact fought to institute slavery among all Americans.

As for the first of Lincoln’s demands; that is, the “restoration of the Union:” the simple fact is that for many years participation in that “Union” had been a kind of economic and cultural slavery for the States of the South. Despised and attacked by fellow members of the “glorious Union,” they found that their wealth was not despised but, indeed, desired and as a result, year by year found its way into the coffers of those who could not be considered anything but their implacable enemies.

But this was not the foremost reason that Lincoln wanted the eleven Confederate States back under the thumb of the North. It is the second demand that makes clear why Lincoln launched his war against the States of the South in the first place; that is, they had refused to observe “the national authority.” To what “national authority” does Lincoln refer? Again, it is simple. Lincoln was going—and indeed already had—nullified the Constitution and the Union of the Founders by replacing the sovereignty of the States and the People with a now national rather than federal government. Of course, this was not just Lincoln’s desire. Many in the North and in the South of both parties no longer wished to maintain the limited federal government as created by the Constitution. Both before and during the War, Lincoln spoke endlessly of “saving” not the nation or the Union but the government! The “national authority” which he wished to “restore”—although it had not existed at least openly before the War—was an all-powerful central government with himself at its head.

To this very day, those who seek what Lincoln desired infest the Constitution with “amendments” and “legal interpretations” assuring that both of his demands would be institutionalized in perpetuity and that is why we have what we have today: an all powerful “national authority.” At least the People of the South can take some comfort in knowing that their ancestors did not willingly or even grudgingly accept Lincoln’s slavery while they could still lift their swords to resist it. That they failed in that effort does not detract from the effort.

As the slow process of excavating the marvel continues, more and more revelations are coming to light about the technical sophistication of the H.L. Hunley, the world’s first successful submarine.

This prompted a U.S. government historian to declare, according to the newspapers, that the discoveries are surprising and that “we” will have to revise our ideas about Confederate technical backwardness.

For anyone who has paid close attention to the War Between the States, the discoveries are not at all surprising. Unlike the government historian, we already knew that Southerners performed miracles of invention, engineering, and production during their fight for independence. But, alas, it is also not surprising that Yankees never seem to be able to overcome their prejudices about the South and continue to think they know everything without even taking a look.

The comments reported go back to the old prewar Yankee mythology that proclaimed to the world that Northerners were innovative and industrious and Southerners were backward and lazy.

It is true. Southerners did not have a lot of factories before the War. For a simple reason—they had better ways of making a living. They did not need them. Northerners had to have factories and had to have them supported by government subsidies and protective tariffs, which could work only because of Southern productivity.

This does not mean that Southerners were backward. Before the War, the South had Matthew F. Maury, who quite literally revolutionized ocean navigation for the whole world. It also had America’s greatest naturalist, John J. Audubon, and many other scientists and inventors. Though he made his career in the North, Cyrus McCormick, who invented the reaper that contributed more than any other single development to the prosperity of the Midwest, was a native of Virginia. Likewise, Richard Gatling of Gatling gun fame was North Carolina born. The Colt revolver, the sidearm that conquered the West, was manufactured in New York—on a design made by Texas Rangers.

It is a fact that during the War, Southerners established factories that provided nearly every thing that was needed for the armies, like the powder manufactory at Augusta. Georgia, under Col. George W. Rains. The two LeConte brothers in Columbia, South Carolina, went from Confederate service to found the sciences at the University of California. There was never any lack of materiel for the Confederate armies. Shortages arose when the railroads were torn up faster than they could be replaced, obstructing distribution. Besides the Hunley, Confederates pioneered in ironclad ships, torpedoes, fortifications, small arms improvement and numerous other areas.

By the way, the most important Northern war invention, the Monitor ironclad, was designed and built not by a Yankee but by a Swedish immigrant, John Ericsson.

Here’s hoping that Yankee observers will continue to “discover” the obvious about us.

Appeals Court hearing of Travel Ban: ‘If Clinton had ordered it, it would have been legal’

Apparently the most egregious part of the Trump so called “travel ban” otherwise known as “extreme vetting” is his thought crimes. If Hillary Clinton had written the order it would have been constitutional so goes the ACLU attorney before the Appeals court. It was brought up yesterday at the Yates Clapper hearing as well, that it wasn’t the Executive Order that constituted illegality, but rather Trump’s “thoughts” behind it.


More @ Bunkerville
Posted by Brock Townsend at Sunday, May 14, 2017 2 comments: Links to this post

Well-well-well…
Comey first came in contact with the Clintons in the 1990s when he was investigating WhiteWater scandal.

He then went on to investigate the Clinton’s during President Bush’s tenure.

Looking to get back into government after a stint in private practice, Comey signed on as deputy special counsel to the Senate Whitewater Committee. In 1996, after months of work, Comey came to some damning conclusions: Hillary Clinton was personally involved in mishandling documents and had ordered others to block investigators as they pursued their case. Worse, her behavior fit into a pattern of concealment: she and her husband had tried to hide their roles in two other matters under investigation by law enforcement. Taken together, the interference by White House officials, which included destruction of documents, amounted to “far more than just aggressive lawyering or political naiveté,” Comey and his fellow investigators concluded. It constituted “a highly improper pattern of deliberate misconduct.”


More @ The Gateway Pundit
Posted by Brock Townsend at Sunday, May 14, 2017 No comments: Links to this post

What You Need to Know About Climate, In One Chart

From Andy May at Watts Up With That, a chart that contains an enormous amount of information relevant to the climate debate. It shows global temperature as inferred from proxies (tree rings and the like), carbon dioxide and methane concentrations, and temperatures as predicted by the alarmists’ models for the Holocene epoch, the time since the end of the last Ice Age.
May comments:

As the chart reflects, we are currently living in a relatively cool period. Global temperatures change over time, and while there are various theories, no one really knows why. If the alarmists were real scientists they would go back to the drawing board.
Posted by Brock Townsend at Sunday, May 14, 2017 No comments: Links to this post

The l19 (Bird Dog),  the one Major Bửng landed on the Midway with his wife and 5 children,The message Maj Bung Dropped On The Midway. It is currently on display at the Naval Aviation Museum in Pensacola, Florida.

Francois Buis After Operation Frequent Wind, USS Midway on the way to Guam after craning aboard over 100 aircraft in Thailand. The Midway and several other Seventh Fleet ships slipped port loaded with 142 VNAF.
Posted by Brock Townsend at Sunday, May 14, 2017 No comments: Links to this post