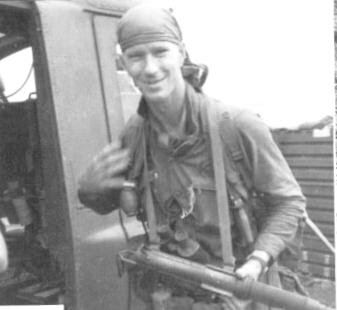 "No one else could engage the machinegun that trapped Shriver's men -- it was up to Mad Dog. Skittish Yards looked to Shriver and his half-grin restored a sense of confidence. Then they were on their feet, charging -- Shriver was his old self, running to the sound of guns, a True Believer Yard on either side, all of them dashing through the flying bullets, into the treeline, into the very guts of Mad Dog's great nemesis, COSVN. And Mad Dog Shriver was never seen again."

'A most unforgettable character

Ultimately he received 26 decorations including 2 Silver Stars, the Soldiers Medal, 7 Bronze Stars, Purple Heart, Air Medal, and 3 Army Commendation Medals for Valor. While listed as MIA he was promoted to E-8.

Discussion at the table differed concerning his last weeks. One guy who had talked to him after he returned from his last leave said that Shriver had said he was very uncomfortable in civilian life and was afraid how he would adjust. Others said that he had a death wish. One said that when he departed on that last mission he knew he would not return. All agreed that he knew he would not return from Viet Nam alive. He left behind very little, his smoking jacket, less then a dollar worth of MPC, and of course, Klaus.

His last mission is well documented on the internet, so I will not be redundant, but most of the NCO’s in SF prefer to remember him as the leader, who, with NVA on all sides, refused extraction, saying, “No, No, I’ve got em right where I want em, surrounded from the inside.“ 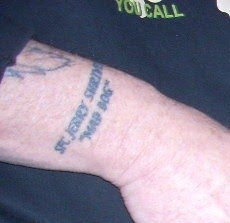 Hey Brock,
Please find below an email to me from Tom Carrell, who was a pilot for SOG and flew Shriver's team.

I had started a page on Shriver at www.virtualwall.org and Tom saw it and contacted me. We've been corresponding off and on now for about 7 or 8 years and he was kind enough to answer some questions for me. He's a pretty good guy, a Patriot, heavily involved in Veteran activities, and just co-authored a book called "Angels From Above".

I figured you'd get a kick out of this.
Ken @ Knuckledraggin my life away

First of all I am sorry it took me so long to get
back. It seemed that for a while the weight of the
earth was on my shoulders. My wife is doing much
better and we have stopped making two and three trips
to the hospital / doctor weekly. It was a scary time.

Couldn't understand why everyone was laughing
especially after I found out it had to do with Special
Forces. Berry Saddler had set me up for that one.
Man, they were the green berets.

After arrival the next day I was assigned to fly with
Chief Beatty, who was probably the best mission pilot
ever. He and I were a little older than the rest of
the crews so we kind of hit it off from the start. I
was 25 and he was about 10 years older. Old men in
those days. After quick tour of the compound and
introductions he briefed me on who was who. Jerry
already had the reputation as being a team leader that
got the job done. Most of the time he did it a little
too well and his extractions were always a little
dicey. Chief said that if you ever went down Shriver
was the man to be on the ground with. He took care of
his team and his aircrews.

What kind of guy was Jerry? In short, he was one of a
kind. He was an operator in an extremely hostile
environment and damn good at what he did.
He was very intelligent and able to carry on
conversations on just about any subject. He was a
deeply caring man as evidenced by his compassion for
his indigenous personnel. He was a loner and only
kept company with those that he chose to keep company
with. More often than not, if he wasn't on a mission,
he was out in the local yard village making sure they
were ok. On the physical side, other than being very
fit, Jerry would not have stood out at a distance.
However up close he was had almost a surreal
appearance. Most striking were his eyes. They were
cold, steel gray. They showed no emotion and seemed
to look deep into you with an icy stare. His cuspids
seemed be a little larger than normal and stood out
when he smiled. The two combined would send a chill
down the old spine.

Do I think that Jerry became a POW? Only if he was so
incapacitated that the choice was not his. He had a
sizable price on his head and he knew it. If he was
the man that I think I knew he would have gone out
fighting and making sure that they paid a dear price
for it. Is it possible that he was captured? Yes but
not likely. I have read about Charles Norris so can't
add or detract from his story. I know that there were
and continue to be reported sightings of Caucasians
being "held". Early on I might have bought into that
but it has almost been 30 years since it all ended. I
would question the ability of someone being able to
survive in those conditions but there is always hope.
Having pulled Jerry out of the bush a couple of times
I can see him charging head long into danger to save
his comrades even if it meant his own demise. He was
that kind of man.

As for Klaus aka Dufus Dog by the aircrews. I have
never heard anything about what happened. I am sure
that those who were serving with Jerry at the time
cared for him. I was working SOG when Jerry brought
him back from Taiwan after R&R. The dog was a pitiful
sight but he was Jerry's dog so we treated him like a
AKC full blood. Now that was when Jerry was around.
If not, he would provide a little entertainment for
us. For some reason that poor dog took to the chopper
crews like a duck to water. If we were sitting around
waiting between missions or on hot pad standby, he
would seek us out and then park his butt right in the
middle of the group. Then he would just start looking
around, kind of studying each person. It wasn't long
until we discovered that if you made a loud noise or
if you popped him in the backside with a rubber band
he would jump up and bite the person he was looking
at. Great sport and the cause for much laughter when
a "new guy" was brought in. Then one day while we
were playing our little game, Klaus was struck from
behind just after his attention was diverted outdoors.
A brand new SF officer was walking by. Any guess who
got a rude introduction to Klaus? Any question who
caught hell? It was worth the butt chewing to see the
look on his face. We all loved that dog.

I have been wearing Mad Dogs bracelet since I found
out he was listed as missing. After that tour, I lost
contact with most of the guys and didn't keep up with
who was doing what. Someone had told me that he had
been killed and his body recovered while still
operating out of Kontum. I had accepted that and
never looked back. I don't remember how I learned
that he was missing but as soon as I did I ordered his
bracelet. I have gone through quite a number as well
but continue to wear one 24/7 and have made a promise
that I will continue until he is home or I am gone.
My son has picked up the task and he too now wears his
24/7 and until.

I have several stories that I will share in the future
and if you would like I can include you in my mailings
on stories etc about Nam and aircrews. Some of them
are really funny and some are even heroic. We were a
little bit nuts then and the years have done very
little to correct that.

Tell your Dad "Welcome Home" and thanks for caring
about Jerry. He is a true American patriot.