Behead All Those Who Insult Free Speech

Hey, how about one of my heroes, General Loan, to the rescue?  You want to behead us, how about we strike first?


As I posted a few days ago, Payback's a bitch.
A few minutes left to live. 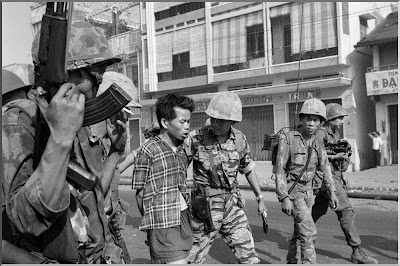 South Vietnamese sources attested that Lém commanded a Vietcong death squad, which on that day had murdered South Vietnamese National Police officers, or in their stead, the police officers' families; these sources said that Lém was captured near the site of a ditch holding as many as thirty-four bound and shot bodies of police and their relatives, some of whom were the families of Loan's deputy, and six of whom were Nguyễn's godchildren.

Encouraged by President Obama’s and Secretary Clinton’s prostrations before the howling mob, the U.N.’s No. 2 honcho explains free speech:

Free speech is a “gift given to us by the [Universal] Declaration of Human Rights,” said Deputy Secretary General of the United Nations Jan Eliasson during a press conference on October 2nd at UN headquarters in New York.  It is “a privilege,” Eliasson said, “that we have, which in my view involves also the need for respect, the need to avoid provocations.”

Free speech is not in the gift of minor Swedish timeserving hack bureaucrats, either to grant or withdraw.

Where is the “respect”, by the way, in “Behead the enemies of Islam”? Under the not so subtle evolution of “free speech” advanced by the likes of Obama and Eliasson, you’ll be shackled by “respect” and “the need to avoid provocations” but kindergartners will still be able to parade around the local park demanding “Behead all those who insult the Prophet.”

In the end, the one-way multiculturalism of craven squishes like Eliasson will destroy our world.
Nuts to him and to the U.N.