A boy hops a freight train. During the Depression it was common for boys in their teens to unburden the family by leaving home to restart their life elsewhere. Freight trains were the default transportation for the destitute of all ages. 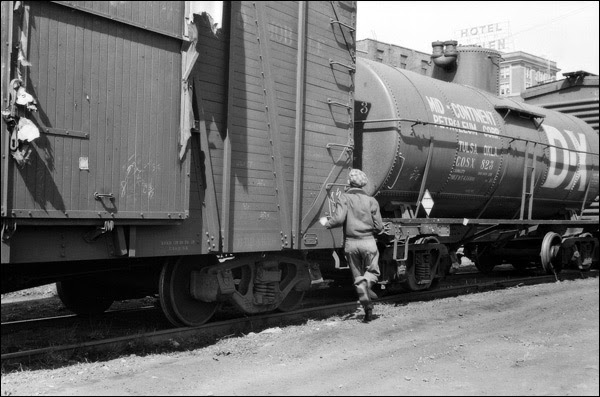 When traveling, ride your train respectfully, take no personal chances, cause no problems with the operating crew or host railroad, act like an extra crew member.

Do not cause problems in a train yard, another hobo will be coming along who will need passage through that yard.

Do not allow other hobos to molest children, expose all molesters to authorities, they are the worst garbage to infest any society.

Help all runaway children, and try to induce them to return home.
National Hobo Museum

- I've scrubbed my system's records.  If you're a donor and live in Connecticut, you can't donate any more to my system.  I won't allow it.  I'm done.  I don't want your money and I don't want to provide you service. I won't come to CT, I won't knowingly buy things from people in CT and I won't do business with you.
Karl Denninger at market-ticker.org

Whenever a progressive refers to "investments," he or she is referring to confiscation of private wealth. Whenever a progressive invokes the "community," that term refers to a state-engineered collective in which the individual has no rights. Whenever a collectivist refers to "public education," that phrase is shorthand for the process of destroying a child's developing sense of self-ownership and indoctrinating them in the notion that they are the property of the "community," says William Grigg in this article, Nationalizing Children, at Pro Libertate.

The next time you go into DMV, please realize that you are subsidizing a drivers license for about a third of the people. You are also paying for their health care, food stamps and shelter. And many of these lower class, poverty-stricken "Americans" are living a higher standard of living than you are, says Dave Hodges in this article, It No Longer Pays To Go To Work, at The Common Sense Show. (H/t survivalblog)

With the  rhetoric heating up and the situation not calming down but escalating, it is time to analyze the real threat, North Korea's unconventional delivery options for WMDs. The absolute worst case scenario would be for the the DPRK to sail two or three subs into the container ports of Long Beach, Los Angeles, and Oakland, surface and detonate crude but effective Hiroshima sized atomic weapons, says John Galt in this article, North Korea Crisis: The US West Coast IS Vulnerable to WMD Attack, at Shenandoah.

Monday is trash day in West Philly. This week I saw a leather couch that was nicer than my living room couch out by the curb. Last week I saw a big screen TV in the trash. I must really be doing something wrong. The amount of trash outside these low income townhouses is two to three times the amount we generate in a week... The money printing of the Federal Reserve with no anchor to gold has allowed the welfare state to grow to immense proportions, says Jim Quinn in this article, 30 Blocks of Squalor, at the Burning Platform.

16% of US annual silver production just vanished - At 9.30 pm local time on 10 April 2013, Kennecott Utah Copper's Bingham Canyon Mine experienced a slide along a geotechnical fault line of its north eastern wall.  Movement on the north eastern wall had accelerated in recent weeks and pre-emptive measures were taken to relocate facilities and roads prior to the slide.  All employees are safe and accounted for. Mine operations are currently suspended while experts assess the extent of the slide and impact on operations. [5 million ounces of silver, 500,000 ounces of gold anually]
Press release at riotinto.com (H/t: TC)
Posted by Brock Townsend at Tuesday, April 16, 2013