Arlington Heights man, police in dispute over confiscating his antique guns, including a musket 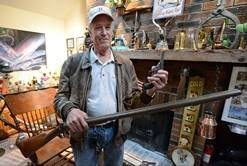 Arthur Lovi sat down with a therapist one day last August to talk about some things that were bothering him. He had high blood pressure, and his physician suggested he talk to someone.

He already spoke to a VA psychiatrist once a month — he has persistent memories from his days as an Air Force crash rescue helicopter pilot in the 1960s — but he agreed. He'd been through a lot lately and figured it couldn't hurt to get some of it out.

"I felt like the weight of the world was on my shoulders," he said.

Lovi told her about the loss that had been all around him the past few years: his mother, a 3-year-old granddaughter who drowned, a son-in-law lost to a drug overdose, and worst of all, his wife of 33 years.