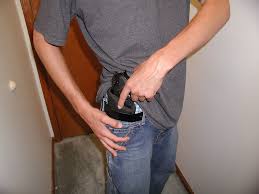 A military service member with a concealed-carry permit detained a man who assaulted him Friday afternoon outside Jake’s on Fourth in downtown Olympia until police arrived to arrest him, a police spokeswoman said.

The man was walking on the sidewalk outside Jake’s about 3 p.m. Friday when a man started “trash talking,” then struck him in the head, Olympia Police Department spokeswoman Laura Wohl said. The attack was unprovoked, and the two men did not know each other, Wohl added.

The assault victim has a concealed-carry permit, and removed his firearm, pointing it at his assailant, Wohl said. Olympia police arrived and arrested the assailant, Wohl added.