I'm Dreaming Of A Riot Christmas 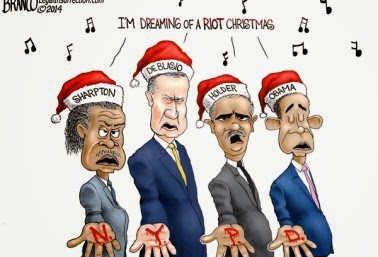 I don’t quite understand why New York City Mayor Bill de Blasio called for a pause in anti-police demonstrations until murdered officers Wenjian Liu and Rafael Ramos were laid to rest.  After all, de Blasio just spent several days loudly declaring the demonstrators to be the very soul of democracy, a constructive and peaceful bunch whose lively chants and colorful placards had absolutely no bearing whatsoever on the murderous actions of Ismaaiyl Brinsley.  Brinsley, you see, was a hermetically sealed lone-wolf nut who wasn’t influenced by anyone, anywhere.  Sure, he attended an anti-police rally on December 1 and recorded a video of the event, but that means nothing, got it?  Even his  religious affiliation is regarded by the media as an inscrutable mystery, no matter what his Facebook page might have said about striking terror into the enemies of Allah.