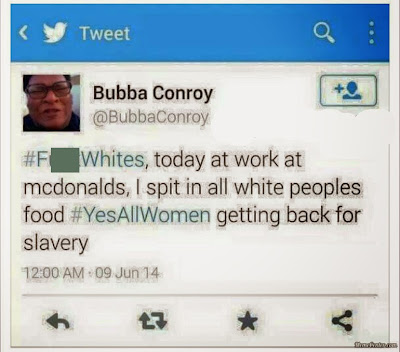 The Twitter account of a black woman who claimed to punish white people by spitting in their food has disappeared.

A screen capture image of a from the now-defunct account has gone viral on Facebook, even though it's dated in June, 2014.

The woman said she is a McDonalds employee and made it a point to spit in the food of every white person the entire day.

Assuming she is being honest about her actions, it validates my contention that we act out what we believe. If we believe nonsense, we will behave accordingly.